Alex Ferguson Critical Of Solskjaer In Chat With Khabib Nurmagomedov

After another disappointing result for Manchester United on Saturday, a conversation between Alex Ferguson and UFC superstar Khabib Nurmagomedov, of all people, might have been the worst news of the day for Ole Gunnar Solskjaer. The former United manager was clearly not happy with Solskjaer's decision to drop Cristiano Ronaldo from Manchester United's starting line-up against Everton.

United were held to a 1-1 draw at Old Trafford, despite taking the lead through an Anthony Martial strike just before half-time. Ronaldo was introduced - along with Jadon Sancho - after 57 minutes, but Andros Townsend finished up a great Everton counter-attacking move to score the equalising goal eight minutes later.

Solskjaer was criticised in many quarters for not starting Ronaldo but probably wasn't expecting it from his ex-manager. In a video posted on the former MMA star Khabib's Instagram, Ferguson is videoed apparently questioning the decision not to start the 36-year-old striker.

"But I also think that when they (Everton) saw that Ronaldo wasn't playing, it was a bit..." Ferguson told Khabib.

"He came on in the second half," Khabib replied.

"I know, but you should always start with your best players," Ferguson added.

While just an offhand comment in a private conversation, the criticism is the last thing the Manchester United manager needs right now with increased pressure on him after bad recent results and the big money signings of the summer. Ferguson has always been publicly supportive of Solskjaer but this reveals he might not necessarily have such belief in private.

Saturday's draw meant United are now winless in four of their last six games but, despite the ever-growing pressure on Solskjaer, the club has handed assistant manager Mike Phelan a new contract until 2024. While not a surprising decision, it does reaffirm that the United hierarchy are backing their manager and his coaching staff despite the inconsistent start to the season.

It was a who's who at Old Trafford on Saturday with many big sporting stars coming to watch Saturday's lunchtime kick-off. Usain Bolt, Patrice Evra and even our own Ken Doherty were pictured chatting to Ferguson ahead of the game.

Khabib has revealed that he was offered a glass of red wine by the former Manchester United manager but had to explain to him his reasons for not drinking.

"I had to explain to him that there are two things: you can be straight and say 'no, no, no – I am Muslim, I never drink'," Khabib told Eman Channel.

"But I also told him, 'This is not good because if I drink, I can smash all of you guys. It's not a good idea'.

"Patrice Evra and Usain Bolt understand. Alex Ferguson asked me about wine. For him, it's good – I don't judge him.

"[Ferguson] understands because he doesn't think I should smash everybody, so he said, 'ok, don't drink'.' 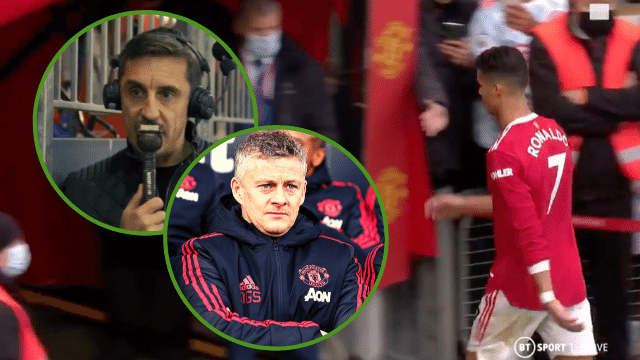 Football
1 week ago
By Colman Stanley
Alex Ferguson Names His Greatest Captain, And It's Not His Most Successful Captain
Football
3 weeks ago
By Jonathan Byrne
Man United Keeper On Dressing Room Importance During 'Treble' Season
Football
1 month ago
By Eoin Harrington
Questions Over Irish Coach At Manchester United As Solskjaer Hangs On
Previous Next