Every year at Balls.ie, we like to take an extremely patriotic stance with the team we submit to represent the site in our public league.

We do our best to occupy every position in our 15-man squad with an Irish international, or at least one who is eligible, and sadly that is something that has become increasingly difficult over the past few years.

By handicapping our player selection in such a way we not only keep track of how are Irish players are performing in terms of fantasy football, but also ensure that we don't have to remember to log in and change our team every week. We go into every season knowing we don't win the whole thing, or even do well, but that's not the point.

We instead want to ensure that no Irish Premier League player has to deal with 0.0% ownership in fantasy football.

So here is the team for the 2017/18 season, and honestly it may never have been less promising in terms of fantasy output. 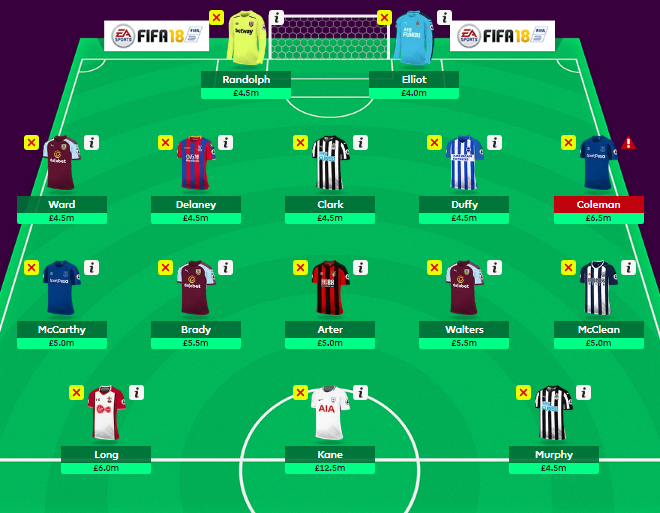 Straight away, you should notice we've called up a ringer to play striker...

This is because there are only two registered Irish players in fantasy football this season, and one of them has joined Nottingham Forest in the Championship as of today. That means Daryl Murphy will be taking a place in our side all season while playing in a different league.

So why Harry Kane? Well, his grandad is from Connemara, and the FAI had actually approached him to play for Ireland in the past.

Plus, he will likely score more points than the rest of the team combined, so we could use the help.

Elsewhere, the limit of 3 players per club has absolutely killed us in terms of the Burnley five, and Jeff Hendrick will have to miss out in favour of more proven fantasy talents in Brady and Walters, as will Kevin Long for Wardinho.

The goalkeeping situation is also in bad shape, as Joe Hart's arrival at West Ham means Darren Randolph will be out of action in the league at least, and Rob Elliot is not expected to start the season in goal for Newcastle, who are looking to sign a new keeper.

On the bright side, we should have three starters at the back, four when Seamus gets back to fitness, and James McClean and Harry Arter in midfield... Yeah, OK, they're going to get booked a lot.

It's a sign of the times we suppose, an all Ireland team in the mid-to-late 90s an early 00s would have been swimming in points. Ah well, hopefully Preston get promoted and we've a number of selection headaches next year.

Football
9 months ago
By Mark Farrelly
Opinion: Liverpool Fans Have Ruined Fantasy Football
Football
9 months ago
By Emmet Bradshaw
Watch: Robert Snodgrass Infuriates FPL Managers in Cracking 3-3 Draw
Football
1 year ago
By Aaron Strain
A Key Fantasy Football Asset May Be Not Be Available To Us Next Season
Popular on Balls
GAA
15 hours ago
By Maurice Brosnan
'The Key To Dublin Is Beyond Cluxton Now': How The Kick-Out Is Evolving
28