An XI Of The Weekend's Best Performing Irish Players Abroad

It's the third weekend of the English football season, while other leagues are now really getting into full flow. Once again we've trawled through a vast amount of the divisions in Europe, the USA and Australia to see which Irish players have been shining.

After each weekend we put together an Irish XI based off the player ratings from WhoScored.com. The website gives player ratings for each of the top four divisions in England, and many other leagues besides. These ratings are based on "a unique, comprehensive statistical algorithm, calculated live during the game."

This week's team is definitely a solid one, although, apart from one or two players, it was a quiet weekend on the attacking front. 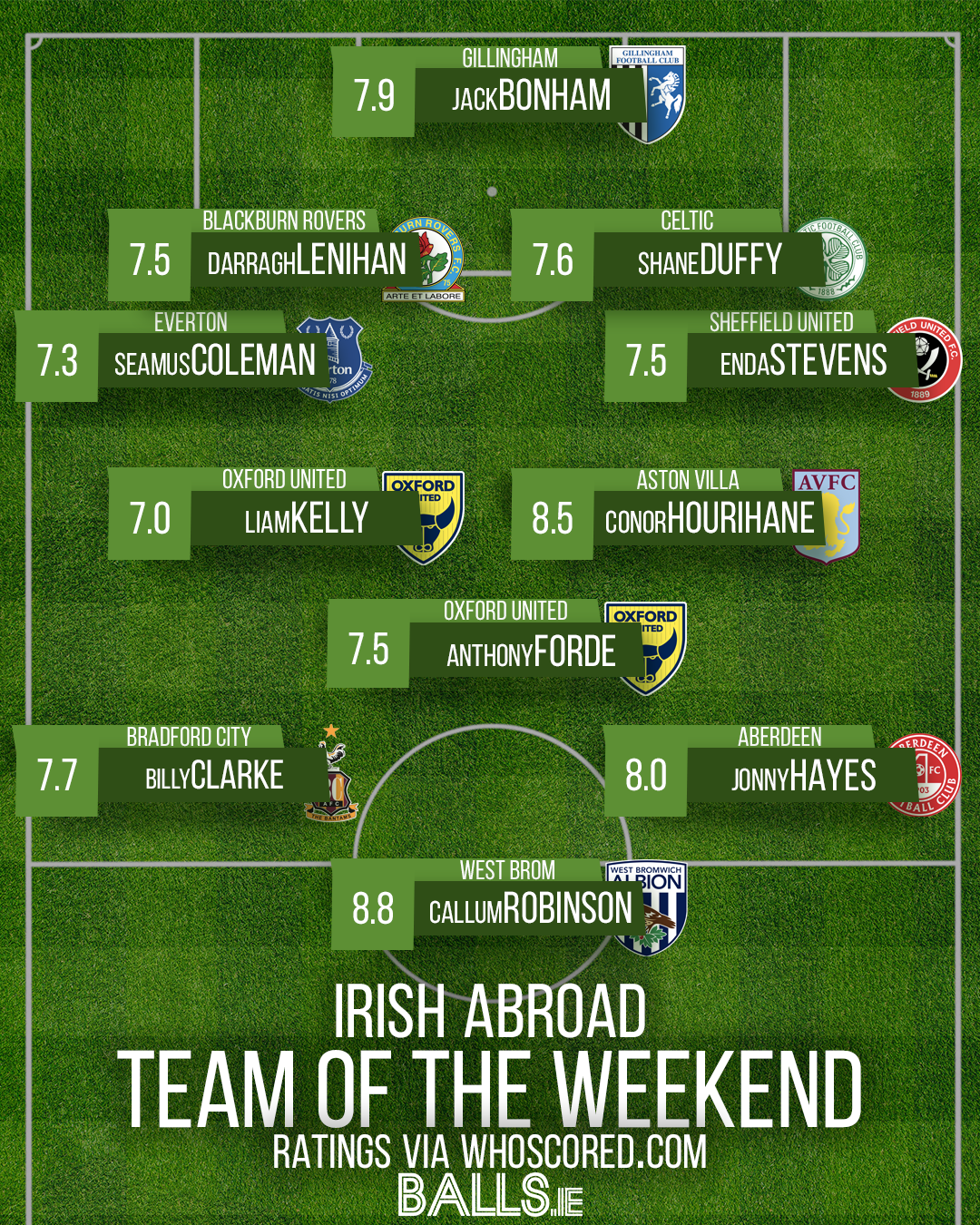 Goalkeeper: Jack Bonham - The Gillingham earned himself a 7.9 rating on WhoScored.com for his performance in their 2-0 win over Blackpool. He not only makes our team but also the League One Team of the Week.

Right back: Seamus Coleman - Just when we thought he was out, Seamus Coleman has been reminding everyone why he's captain for club and country with his form so far this season. Got himself an assist against Crystal Palace to put the icing on another great display.

Centre back: Shane Duffy - At this point we might just have to crown this the dedicated Shane Duffy spot in the team of the weekend. Once again he makes it, after a 7.6 rating for Celtic against Hibernian.

Centre back: Darragh Lenihan - Last week it was his Irish and Blackburn teammate, Derrick Williams, who made our team, this week Lenihan was the standout performer, as Blackburn trounced Derby County.

Left back: Enda Stevens - Sheffield United may be struggling so far this season but Stevens was still very impressive in their defeat to Leeds on Sunday.

Centre midfield: Anthony Forde - The Oxford United midfielder shares his name with an Ulster winning Cavan Gaelic footballer but Anthony Forde, the soccer player, is actually from Limerick. He got an assist in Oxford's 4-1 win over Accrington Stanley. Whoever they are?

Centre midfield: Conor Hourihane - The Aston Villa midfielder has picked up where he left off in the summer, with a really good start to the season. A goal and an assist for him in Villa's 3-0 win.

Centre midfield: Liam Kelly - The second Oxford United player to make it into our team this week, Kelly has been enjoying a good run in the team after extending his loan deal from Feyenoord.

Attacking midfield: Billy Clarke - There are at least 300 Irish lads playing in defence for Bradford City at the minute but the standout Irish player from the weekend was an attacker, in the form of Billy Clarke. He got an assist in Bradford's 2-1 win over Stevenage.

Attacking midfield: Jonny Hayes - We've got two players from the Scottish Premiership in our team for the first time this season. Hayes played brilliantly in Aberdeen's 3-0 win over Ross County, and his assist for the first goal is worth a watch.

Striker: Callum Robinson - He waits over a year for another Premier League goal then two suddenly come just minutes apart, Robinson could have a big role for West Brom this season.

For futher detailed analysis of how all the Irish players abroad got on at the weekend, check out our player ratings article here.

Football
3 years ago
By David Kent
The Balls.ie Team Of A Packed Footballing Weekend
1

Football
3 years ago
By David Kent
Presenting The Balls.ie Premier League Team Of The Weekend
1

Football
3 years ago
By David Kent
Presenting The Balls.ie FA Cup Team Of The Weekend
Previous Next

Team of the Weekend republic of ireland

The Rewind
13 hours ago
By Gary Connaughton
Quiz: How Well Do You Remember The 'Friends' Roommate Quiz?
3

Motorsport
13 hours ago
By Michael McCarthy
Watch: Kimi Raikkonen Goes From 16th To 6th In One Brilliant Lap
39