'I Was Already Taking My Jersey Off When It Left My Boot!'

The clock had just ticked into the 93rd minute at the Aviva Stadium on Tuesday night, with the score at 1-1, when the ball fell at the feet of Andrew Omobamidele.

The 19-year-old centre-back - who was making his first senior international start - stepped forward and hit a super strike toward that arrowed towards the top left-hand corner of the Serbia goal. For a moment, it appeared as though Ireland were about to take an unlikely lead.

"I thought it was in," Omobamidele told RTÉ after the game.

"I was already taking my jersey off when it left my boot! But, the keeper pulled off a good save."

The game was Omobamidele's first time playing in front of a crowd at the Aviva.

"It's nothing like I felt before," said the Norwich defender, who got some assistance from Shane Duffy during his post-match interview.

"It's absolutely amazing. It just gives you that extra bit. Even at the end, when you're after sprinting the whole length of the pitch back, I didn't feel tired because of the crowd. It's my first time experiencing it, and hopefully, there will be many more times to come.

"The nation have to try their best to keep their faith in us. We saw against Portugal, with their world class players like Ronaldo and Bruno Fernandes - we went toe-to-toe with them for the majority of the game.

"This part of the campaign has obviously been disappointing with two draws and one loss but I think we can take a lot from it, and keep moving forward."

Andrew Omobamidele chats to @corkTOD after an impressive start on his first start.
Luckily he had Shane Duffy to coach him through interview 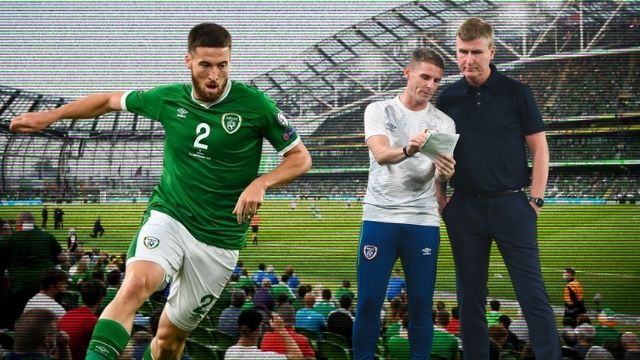