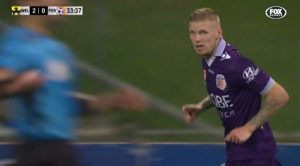 Perth Glory and Wellington Phoenix played out a six-goal thriller in the A-League this morning.

After the New Zealand side raced into a 2-0 lead after 25 minutes, Perth pulled one back 10 minutes later.

It came via 30-cap Ireland international Andy Keogh - his 10th goal of the season. The 30-year-old Dubliner brilliantly controlled a ball from Dino Djulbic on his chest before striking past Glen Moss in the Wellington goal with his second touch.

This was absolutely outstanding. You’d go a long way anywhere around the world to get a better goal than that, technically and a more difficult one.

Especially with his weaker foot. It was a superb first touch and Durante was probably happy he was on his weak foot and that was superb – it was great timing, he kept his eye on the ball and that’s as good as any goal you’ll see anywhere.

Wellington would retake their two-goal advantage shortly after half-time but goals from Adam Taggart and Diego Castro would earn a point for Perth.