Ireland Have An On-Fire Striker You Haven't Heard Enough About

Of all the issues which are troubling the Republic of Ireland at the moment, their lack of goals is without doubt their main concern.

It is incredibly difficult to win games when you struggle to find the back of the net. With the way things currently are, conceding one goal all but guarantees that Ireland will not win a given game.

Many put the current struggles down to the lack of a Robbie Keane type figure in the squad, somebody who guarantees goals at international level. However, such players are an anomaly and not the norm in this country.

It is likely that Ireland's goals will have to come from across the team, meaning getting as many players who are comfortable in front of goal as possible in the squad will be paramount to any future success.

One young forward who is tearing things up at the moment could be part of the solution.

Anthony Scully has been in remarkable form for Lincoln City in League One this season, building upon a breakout campaign in 20/21. At 22-years old, he will surely have to be considered as an option for Stephen Kenny in the next international window.

Heading into this afternoon's game against Cambridge United, Scully had been in fantastic form in the forward. Operating off the left or through the middle, he had scored seven goals in eight games. That includes a few absolute crackers.

It didn't take him long to get into the swing of things today. The forward would register a goal and two assists inside the opening half an hour.

He would then produce another goal and an assist in the second half.

72' Anthony Scully produces a trademark finish as he cuts across the edge of the box and fires it into the top right corner!

This is no flash in the pan. Scully notched 16 goals and nine assists in all competitions last season, suggesting he is very much a player on the rise.

Born in London, he was a highly rated prospect when making his way through the West Ham academy. Despite not being able to make a breakthrough at the club, he is now starting to really find his feet at Lincoln City in League One.

The level he is playing at should not deter Stephen Kenny. Troy Parrott started against Azerbaijan last weekend having only scored three goals in that division since January, while Ronan Curtis is another regular squad member who has not been able to match the production of the Lincoln man.

Whereas other players operating in the lower leagues may have age counting against them in searching for an international call-up, Scully still very much has youth on his side. He will not turn 23 until April of next year.

He has received little hype as of yet, perhaps down to his relative lack of pedigree with Ireland's underage sides. The player won only a pair of caps at U21 level, making his debut at the end of their Euro qualifying campaign in 2020.

Despite this, he looks to have the ability to help ease Ireland's goalscoring concerns if given the opportunity.

We would be shocked if he was not part of the Stephen Kenny's squad before the end of the year. 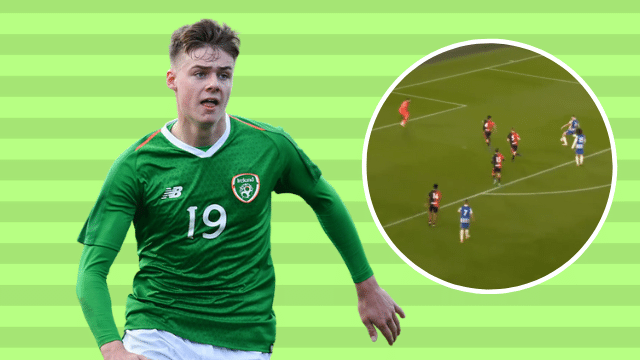