Argentina Boss In The Dark Over Lionel Messi's International Future

In the run up to Argentina's upcoming friendlies with Guatemala and Colombia, Argentina caretaker manager Lionel Scaloni has revealed that Lionel Messi has excluded himself from international selection. 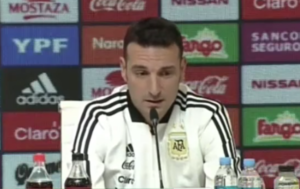 Scaloni was assistant manager of Argentina during Jorge Sampaoli's disastrous World Cup campaign in Russia, and was named caretaker manager of the side when Sampaoli was relieved of his duties, and has stated that he's not sure whether the 31-year-old will return to the squad in the future:

I spoke to him and after that talk, he has not been called up for these games. Honestly, we have not spoken about what will happen in the future.

We all know what he represents for us and we shall see what happens. I have a good relationship with him, it was a good chat that we had and we were very clear. He will not be in this call-up and in the future, we shall see.

Scaloni went on to say that now is a time for 'renovation' following a difficult period for Argentinian football:

We have very clear in our minds that we need to add people to this new adventure. I spoke to the majority of the players and they all gave me their availability. We feel that we need these players right now. I feel it’s the time for renovation. I’m convinced that the time to call up these players is now.

This is not the first time Messi has stepped away from the national team, the Barcelona man quit Argentina after the 2016 Copa America, but rejoined the international setup a year later.

Messi is not the only high profile star left out of the squad however, with Sergio Aguero and Angel Di Maria also missing the cut for the upcoming friendlies in September, with several lesser known players set to be given the chance to impress Scaloni:

See Also: Man Of The Match For Young Irish Midfielder On His Home Rotherham Debut