Presenting The Balls.ie FA Cup Team Of The Weekend

Oof, what a quarter final line up we have in the FA Cup. Chelsea against Man United, Spurs against Millwall and of course, the potential for a non-league semi final line up.

We're all up for Sutton United on Monday night, right? Well, barring some major standout performances, we're comfortable enough with picking the Balls.ie team of the FA Cup last 16.

The Balls.ie Team of the FA Cup Last 16 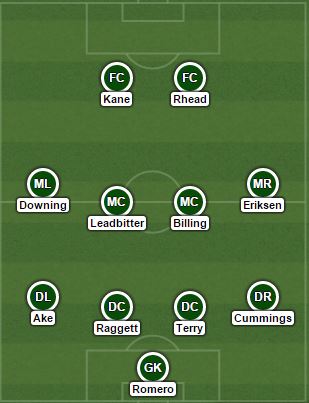 Didn’t cover himself in glory for Blackburn’s disallowed offside goal, but United’s second string keeper did make five important saves as United successfully navigate their way past Owen Coyle’s side.

Shaun Cummings has had a solid enough year for Millwall. He’s also scored twice in the FA Cup, including the winner to heap more misery onto Claudio Ranieri and the Premier League champions. Demari Gray’s pace was neutralized by the right back, with two dispossessions.

There’s life in the old dog yet. The 36 year old had a superb game against Wolves, with four tackles, four successful headers and a 92% pass success rate. For a centre back.

Making his just his tenth appearance of the season, Terry looked as good as he did six years ago. Don’t expect him to hold his place in the side though. If it isn’t broke…

He had to be in here. The defender that’s wrote himself into Lincoln’s history books won a massive seven headers against Sam Vokes to tack on to his winning goal.

Was a regular in these pieces when at Bournemouth and is continuing the good form for Chelsea. Ake and Victor Moses seem to be flourishing under Antonio Conte with the youngster making eleven clearances, 61 passes and having 81 touches which isn’t too shabby for a defender.

A brace of assists for Eriksen as Spurs dealt rather easily with Fulham in the London derby (which apparently is a thing). More passes than any Fulham player, three successful take ons and an almost man of the match performance. He would’ve got it any other day.

Middlesbrough were given an almighty scare by League One side Oxford. Initially, Leadbitter’s goal had put them ahead. Only Stewart Downing had more attempts at goal and a higher success rate than Leadbitter all game.

Coming up a midfield worth fifty two million pounds isn’t the easiest task. Especially for a twenty year old. But Billing becomes the second Dane to get into our team after winning more tackles than any of his teammates.

Not only that, he had an 87% pass success rate as Huddersfield frustrated Pep Guardiola’s Man City.

Stadium was rocking, what an atmosphere 👏🏽 unreal team performance against some of the best, everybody put in a great shift today 👏🏽🔵⚪️

Leadbitter was the engine but as noted before, Downing was the key for Boro to unlock the U’s.

He held the ball more than any of his team mates and covered more yards to boot to add to his shots and pass success rate.

Boro were rewarded with a tie against Huddersfield or City.

Sixteen headers. That’s how route one Lincoln were. Then again, if your striker was almost six foot four, you’d probably lump it up to him too.

If you manage to piss off Joey Barton, then you’re a good guy in our minds. Rhead was a nightmare for Burnley and earned his place in this team.

You score a hat trick – you get in the team of the week.

Team of the Weekend fa cup