2019 will be remembered as a tremendous if torturous year for Irish sport. We saw highs like we never experienced before (Portrush) but our lows (the FAI farce, the Rugby World Cup farce) were pretty damn low. Here's the final part of our countdown of the top 30 moments of the Irish sporting year, going from #10 - 1. There were some historic moments, with a number of firsts for Irish sport.

A year after going into the World Championships injured and failing to make the pommel horse final, Rhys McClenaghan made up for the disappointment of 2018 by making history in 2019.

In October, the 20-year-old from Newtownards became the first Irish gymnast to qualify for a world final. That achievement qualified him for the Olympics in Tokyo.

In the final, it was another historic moment as McClenaghan claimed bronze behind winner Max Whitlock and silver medallist Lee Chih-kai. There was just 0.100 between first and third.

The injury which he had suffered in 2018 was a setback but one McClenaghan and his coach Luke Carson used as an opportunity. They rebuilt his technique from the basics up. It was the mark of an athlete always willing and wanting to learn.

He will head to Tokyo as one of our main medal hopes.

Rhys McClenaghan 🤸🏻‍♂️ has won Bronze at the World Gymnastics Championships Pommell Horse Final. Huge feat to win Ireland’s first ever World medal in the sport 🏅big day too for @GymnasticsIre Would love an expert to show me where he lost a full point on execution 🤷🏼‍♀️🤸🏻‍♂️ pic.twitter.com/b5syWdyUMD

Horses aren’t supposed to return to the Grand National as a champion and win. That’s why it hadn’t been done since Red Run in 1974. But the little star from Cullentra Stables defied both history, and the daunting obstacles around the Liverpool venue, to romp home and claim back-to-back wins in the Aintree showpiece. And it felt like the entire country had a stake in the Gordon Elliott-trained runner, given the whole place went into celebration mode as the horse whipped past the winning post.

When he arrived back in Summerhill there was a homecoming reminiscent of a county final success, and the name has remained on everybody’s lips in the months since. Will he go back to try and win the unprecedented three-in-a-row? Michael O’Leary, the owner, seemed reticent at first but it now seems like the star will return to his favourite hunting ground. More memories to be cultivated.

A punch in the stomach for Irish rugby, the Irish rugby media and Irish rugby fandom at large. Nobody saw this one coming. Hindsight is a wonderful thing, but it’s surprising more people, especially those coaching the Ireland rugby team, weren’t particularly alarmed about the prospect of playing the World Cup hosts, a team whose form was ominous over the past year, a team who had previous when it came to pulling off World Cup shocks, a team who had an entire rugby-rabid nation behind them.

And even though Ireland’s form had been woeful for all of 2019 and we have never delivered in the World Cup, Joe Schmidt elected to give Jonathan Sexton a rest week against Japan and Ireland subsequently received a bodyblow that effectively ended our tournament. Japan played with a wild hunger that humiliated Ireland that day. The All Blacks loss was nightmare viewing but Ireland’s World Cup ended that Saturday morning in Shizuoka. This was definitely the most shocking Irish sports moment of the year.

There is a valid argument that professional wrestling should not be included in a list of great sporting moments but regardless of your opinion on that hot topic, we can all surely agree that what Becky Lynch achieved this year is nothing short of incredible. In fact, her Wrestlemania win was arguably the most significant moment involving any Irish person across all of sport and pop culture.

Yes, wrestling is scripted, we get it! But whether you rise to the top of the card is still down to your own talents, both in terms of athletics and your ability to connect with the crowd, and no wrestler has exemplified this more than Becky Lynch.

Over the past 18 months she has risen to be the star of a $5bn company. A company where women were pretty much an afterthought until Lynch and her colleague broke through the glass ceiling in recent years.

No women’s match had ever closed out Wrestlemania, the biggest WWE show of the year, in its 35 year history. So when Lynch defeated Ronda Rousey and Charlotte Flair in 2019’s main event - all becoming the first ever double Raw and Smackdown women’s champion in the process - it wasn’t just a historic moment for her, it was an extraordinary moment for the entirety of female wrestling and most importantly, the young female fans watching on.

It was the decisive moment in the All-Ireland hurling final, the one that provided the narrative over subsequent days and the one that will sting over the winter months on Noreside. It was a harsh red card, though a red card nonetheless.

On first viewing, it almost seemed like Cathal Barrett had gone down without contact. However, once the replay slowed down the footage it was clear that Hogan caught the Tipperary defender on the chin with his elbow. The Kilkenny ranks were understandably bitter as the decision robbed them of some early impetus. But rules are rules and the stray elbow verged on the side of carelessness. Nevertheless, it instigated one of the debates of the summer - the players in question even getting involved.

“There was absolutely no way it was a sending off,” Hogan said in the days following the game. Naturally, Cathal Barrett took a different slant saying: “It's a head-high tackle so it must be a red.” Barrett also responded to criticism from former Kilkenny defender Jackie Tyrell who claimed the Tipperary man had gone down too easily. “Jaysus Jackie, that’s a bit harsh,” he said the morning after the game. It all leads to a recipe from a feisty rivalry in 2020.

Trailing 3-1 to Canada in a penalty shootout at Donnybrook, Irish hopes of qualifying for the Olympics were fading fast.

The two legs of the Olympic play-off between the sides had both finished 0-0, resulting in the shootout being required.

Ireland's dream was revived when Ayeisha McFerran pulled off two brilliant saves and Beth Barr and Chloe Watkins both scored, taking the contest to sudden death.

Up stepped Roisin Upton to score from the tightest of angles. It was a moment which would became all the more remarkable after the game when it emerged she did so with a broken wrist.

The spectacle was not over though. Amanda Woodcroft had a chance to level it but McFerran stood tall as the Canadian swung and missed.

Ireland were heading for Tokyo.

What a shootout! Here's the moment @IreWomenHockey qualified for @Tokyo2020 👏👏👏

4. The Sunday Times are given permission to publish story about €100,000 John Delaney loan

Sometimes the biggest sporting moments don’t happen in a ring or on a pitch. When the story about John Delaney’s €100,000 loan to the FAI was published in The Sunday Times, few could have predicted the snowball effect that was about to take place.

It came so close to never seeing the light of day. John Delaney took the newspaper to court to stop Mark Tighe’s story from being published, but he was unsuccessful. The judge agreed that it was in the public interest.

Nobody knew how important that decision would be.

What would transpire over the remainder of 2019 was remarkable. The FAI’s failings would come to light, and we sit here at the end of the year with the association on its knees. Football in Ireland is likely to be changed forever, and it all started with this story.

Would we know all we do now without Mark Tighe’s journalism? It’s highly doubtful. It’s likely the FAI would have carried on with their business as normal. In an age where the value of journalism if often questioned, this is an example of the genuine change that can be brought about through that medium.

3. The final round of Katie Taylor vs Delfine Persoon 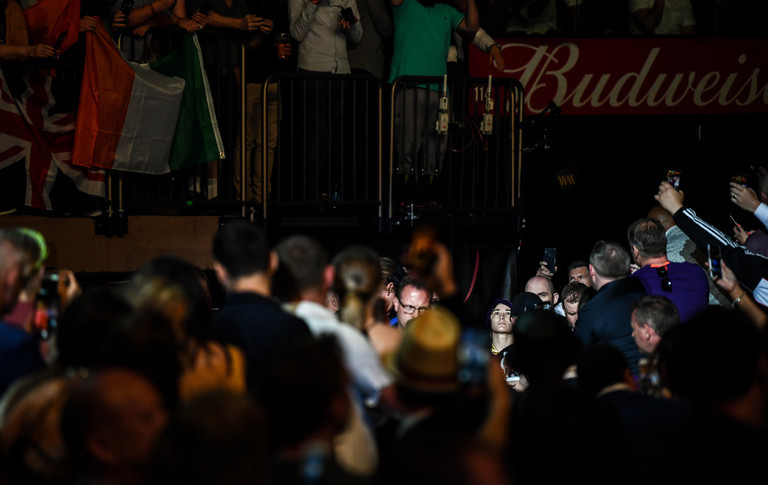 This wasn’t the best round of the fight, which came some five rounds earlier. It certainly wasn’t convincing or comprehensive. Yet it was the biggest moment and a crowning one at that, not just for Katie Taylor and Delfine Persoon but for the entire sport.

Madison Square Garden was packed to the rafters, on their fight and engrossed by the action. Battling, barnstorming, boxing. The fact it occurred in the sport's most iconic arena is fitting. A big fight on a big stage, and an Irish athlete at the heart of it. The result of the fight was controversial, the result of the night was definitive; this was a big deal. 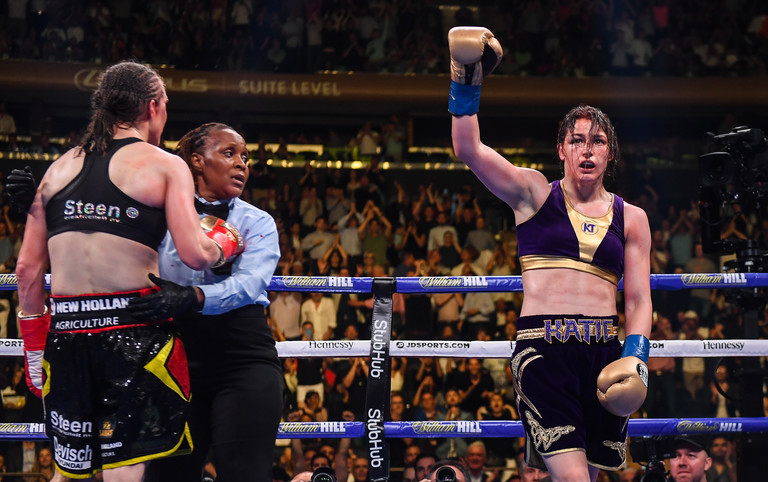 When we sat down to pick out the standout instant from Dublin’s five-in-a-row replay victory over Kerry we could not look any further than Eoin Murchan’s goal.

Sure, the final whistle was the moment when history was made but that whistle was forged when Murchan tore up the field and clinically rifled the ball into the bottom corner. Kerry hung in there for a period after the goal but this was really the turning point. It had the country off their seats and shouting in disbelief.

It was a moment that symbolised everything that makes Dublin the greatest football team of all time. You’re the opposition, you’ve kept the blue wave at bay, you’re level going into the second half. It’s there for the taking...BANG!...you’re finished.

No celebration from Murchan. No thumping of the chest. Just lethal precision. Turn around and sprint back into position. Next ball, please.

1. Shane Lowry makes the long walk to the 18th green

There’s no way we could have picked anything else.

It’s difficult to overstate just how special it is to have Irishman win The Open on home soil. The biggest tournament in golf taking place on our small island, having one of our own walk away with the claret jug was incredible.

To have it be Shane Lowry made it even more so.

There is perhaps no Irish sportsperson as universally loved as the Offaly man, and with good reason. He is an absolute gem.

He’s a hell of a golfer too. Lowry’s performance in this year’s Open was one of the best we have seen in the tournament in recent years. Many thought he might crumble under the pressure of the lead, but he only got stronger.

By the time he made his way to the 18th green on Sunday, he knew he was about to fulfill his lifelong ambition. After being the coolest man in Portrush for the previous four days, he let all that emotion pour out.

The home crowd was on form too. It was spine-tingling stuff.

Shane Lowry takes the walk up to the 18th green. #TheOpen pic.twitter.com/zEXNSgq426

This was Lowry’s first major, but we sincerely hope it won’t be his last. He has the talent to compete with the best of them when he is on his game, and there is a real hope that this win can help him become a consistent challenger in golf’s biggest event.

For now, we can just enjoy this win. We salute you Shane.

TV &amp; Film
1 week ago
By Colman Stanley
Sport Reigns Supreme In Most Watched Irish TV Of 2021
Previous Next