Balls Investigates: The Foul Throw Epidemic That Could Bring Down The Sport

All it takes for evil to thrive is for good men to do nothing.

As we stand here today, in June 2019, football is crumbling before our eyes. If we don't act now, are we any better than the monsters who allow this treachary to occur?

There are a number of ongoing issues that have the potential to change football as we know it.

The VAR debate continues to rage on, and it seems like the technology is here to stay. To be fair, most of the people complaining about it are what you could generously describe as 'dinosaurs', and it has vastly improved the sport as a whole.

The handball rule is another one that has been brought into focus in the past few months. A continuation of the VAR debate in many respects, it is becoming increasingly difficult to play football at the highest level if you still have both your arms.

We have not even mentioned other problematic things such as simulation or the influence of less than creditable agents in the game.

Yet all of these problems pale in comparison to the real issue lingering on football's grizzly underbelly. There is something more discreet, more sinister, that could shake the sport to its very core.

What constitutes a correctly taken throw-in? According to FIFA rules, it's quite simple really. At the moment of delivering the ball, the throw is legal as long as the thrower:

Simple rules. Vital rules. If we turn our back on the procedure to correctly take a throw-in, we are little more than animals.

And yet, we are currently teetering on the brink.

For all the issues facing football, this is one that is rarely spoken about, but could change the game forever. What's worse, referees are ignoring the problem they could so easily bring to a halt.

It has seeped into the game at the highest level. Well, into Ireland versus Gibraltar anyway.

For all the pandemonium that has ensued following our stellar win over the 195th best team in the world, most have conveniently overlooked that this is a tainted victory.

You see for Ireland's second (and result clinching) goal, Mick McCarthy's men resorted to the most underhanded of tactics. What you are about to see next may shock and appal you.

That's right, the throw-in at the start of the move was ILLEGAL. The ball bounced on the sideline, meaning it did not legally enter the field of play.

The referee should have whistled for a foul throw, meaning the ensuing goal should not have stood. Our entire qualification campaign is built upon a pack of lies.

But us Irish are not the only culprits, far from it in fact. You may have seen the footage of Gareth Bale's monster throw-in from Wales' loss to Croatia doing the rounds on social media in recent days.

Impressive? Certainly. A clear act of cheating? You better believe it.

Wasn’t to be for Wales away to Croatia but what an assist this would’ve been from Gareth Bale, an absolute monster throw #EURO2020 🏴󠁧󠁢󠁷󠁬󠁳󠁿 pic.twitter.com/TE3NwNPWI0 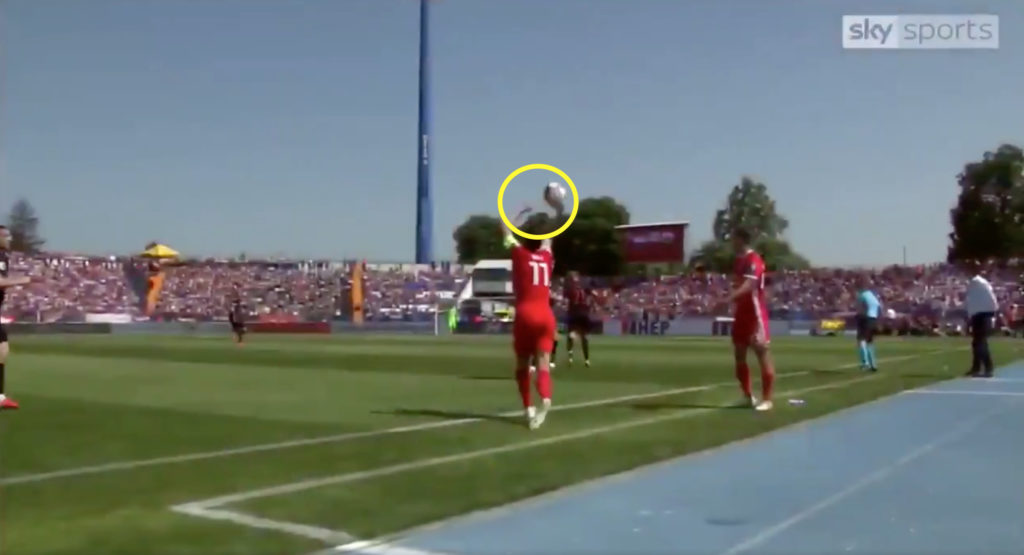 The man only has one hand on the ball when it is released! Have you no dignity Gareth?!

Neither of these infringements were spotted by the referee. Two incidents mere days apart, and that is only the top of the iceberg.

Here's Joe Gomez swindling his way to a goal for England, with his foot clearly on the pitch.

LIKE for FOUL THROW
RT for IT'S COMING HOME
👇👇👇 pic.twitter.com/eTcKNvwdO0

Liverpool's throw-in coach may have thought them many things, but clearly common decency wasn't one of them.

We could go on and on, but we will spare you any further shocks to the system.

Let it be known that is a plague within the sport. Considering the overarching failure of referees to penalise these clear violations, we assume there is some sort of conspiracy involved. It is the only logical explanation.

By all means, go for power in your throw-ins. Launch it up the field, even try something fancy if you want, but for the love of god stay within the rules.

It doesn't have to be pretty. Take this effort from Iran as the perfect example:

How was this not a foul throw!? 🤦🏼‍♂️ pic.twitter.com/nGlcCNuYiJ

Feet planted, forward facing, both hands on the ball, ball behind and over his head. Beautiful. That's how you take a god damn throw-in.

If we are to stop football from crumbling into the ruined remains of what was once a thriving game, we must cut this out immediately. If we don't have proper throw-in, what is the point of it all?

Please, won't somebody think of the children...

Football
14 hours ago
By Gary Connaughton
Quiz: Can You Name The Most Expensive Irish Footballers?
1