When James McClean moved from Derry City to Sunderland in the summer of 2011, it was difficult to know what to expect.

He moved for a fee of £350,000, no small change for a 22-year old League of Ireland player. The path from this country to Sunderland was one well travelled at the time, with the Irish interests in the club well established. However, not all of those moves worked out.

This was also a time when it was thought that Irish players had to move to England at a very young age to have a chance of success. The leap from the League of Ireland to the Premier League was thought to be far too big. 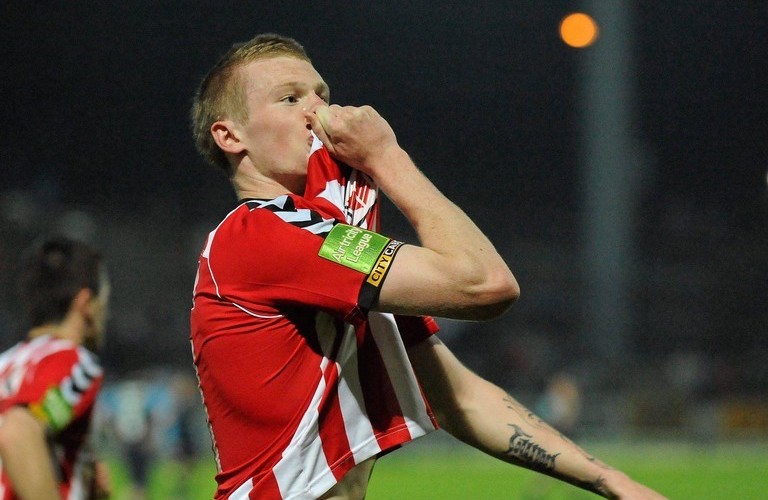 It's fair to say that McClean did little to disprove this theory during his first few months at Sunderland. He never really got a look in, with his only game time coming with the reserves.

Despite this, he was making no shortage of headlines in Ireland. It had nothing to do with his exploits on the pitch but instead with a decision he made off of it.

Knowing all we now do about James McClean, it's difficult to imagine a time when he pulled on a Northern Ireland jersey. He is a proud republican, but when the opportunity came to represent the country at underage level, he felt he couldn't turn it down.

Still, he always harboured ambitions of playing for the Republic of Ireland. He got the process rolling on a potential switch in 2011 and it was confirmed to be in the works on the week he joined Sunderland early in August of 2011.

It was news that was not all that well received by those in the North. McClean had only days before been called up to the senior squad by manager Nigel Worthington. This also came at a time when the practice of players born in the six counties switching to the south was a hotly contested one.

Darron Gibson and Marc Wilson had gone this route in the previous couple of years, while Shane Duffy would also switch around the same time. While they were entitled to do so under the Good Friday Agreement, it was still an issue for football in the North.

Speaking a few months after his switch was confirmed, he said the Northern Irish setup was not a welcoming one for a player with his beliefs:

The IFA has to make decisions if it wants to stop players from the north opting to play for the Republic and the answers are staring them in the face.

Who are the people who make decisions at IFA level and can they really say that it is a good thing for football in Northern Ireland to have the English anthem played before games?

I cannot understand why it is played. Fifty per cent of the people in Northern Ireland do not recognise it as their anthem and among that 50 per cent, quality footballers will emerge.

By the time they do come through, they most likely will have had their minds made up for them by the IFA.

Northern Ireland were quickly becoming tired of the trend that had been developing. They felt that the rule which allowed all players born on the island of Ireland become eligible to the Republic was unjust and put them at a huge disadvantage.

Early in 2012 in response to McClean's decision, Deputy Leader of the DUP Nigel Dodds said something had to be done to stop the country from losing their best players:

Action should now be taken to stop the haemorrhaging of talent from Northern Ireland.

The British and Irish governments should now work to address this injustice which sees footballing talent developed in Northern Ireland, at some considerable cost, lost to compete at international level with the Republic’s team.

No one should be opposed to the idea of talks to resolve this issue, and there is a degree of irony about the demands for free eligibility.

Putting all of this aside, it did not seem that a chance under Giovanni Trapattoni's Ireland would be coming anytime soon. At the time Ireland qualified for Euro 2012 with a play-off win over Estonia, McClean had not even made his debut for Sunderland.

Martin O'Neill was stressing patience for the player at club level, but his opportunity would arrive eventually.

The winger made his debut in the 2-1 home win against Blackburn, playing a fairly nondescript 14 minutes off the bench. Further sub appearances against Spurs and Everton followed. That game at Goodison Park would be the last occasion that season that McClean did not start a game for Sunderland that season.

His was named in the team to play Manchester City, a 1-0 win at the Stadium of Light. He would score his first goal in the very next game in the 4-1 win at Wigan.

All of a sudden, Irish fans were starting to take notice of a player who had been relatively unknown outside of League of Ireland circles only a few months before. After all, our first major tournament in ten years was on the horizon.

Ireland had used a number of wingers in the qualifying campaign, most notably the likes of Damien Duff, Aiden McGeady, and Stephen Hunt. However, the eyes of most supporters were on McClean in the months building up to the tournament. 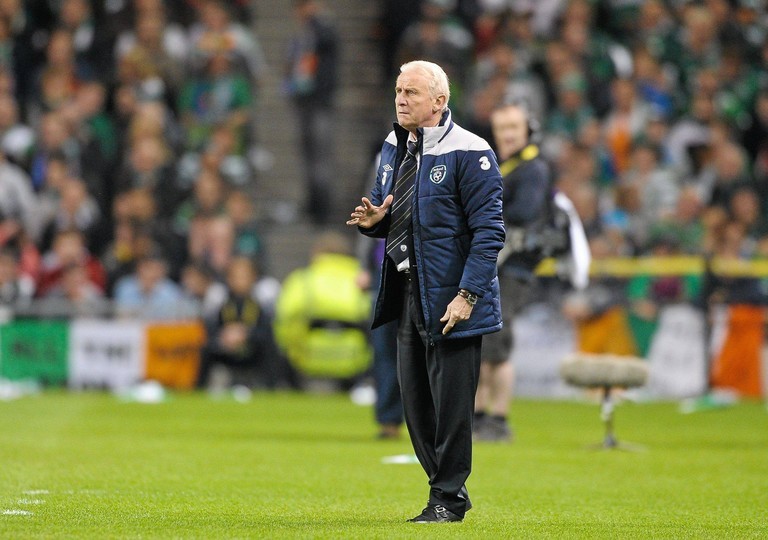 Displaying a trait that has become incredibly befitting of Ireland managers over the past few decades, Giovanni Trapattoni was stubborn when it came to his team selection. He did not bring in new players easily, preferring to stick with those he knew.

Still, with a friendly against the Czech Republic set to take place in February of 2012, surely an opportunity would be given for new faces to impress?

McClean done more than most in the weeks building up to that game. Between January 3rd and February 4th, he registered two goals and two assists in five Premier League games.

And yet, he was not named in the original squad a few days later. Ireland fans couldn't really understand the decision at the time.

Just back from W'ford. Can't fathom McClean exclusion. If Prem Lge mgr had choice of McClean/Duff/S Hunt on current form who would he pick?

James McClean may have a head that looks like it's been stung by a thousand bees, but how he's not in the Ireland squad I'll never know.

Trap, Trap, Trap...what in the name of all that's holy -- leaving out McClean...nice one

The Italian explained his decision by implying this was no time to draft new players into the squad:

I think all the squad deserve to come with us. They believe us and they know us.

We have four or five other names because we have no time to change. One is McClean.

As was typical of his attitude during this period, McClean responded by scoring in a game against Arsenal two days later. Ultimately the calls for his inclusion became too difficult to ignore.

The winger was called up to the squad a few days later and would play 11 minutes off the bench at the Aviva Stadium to make his Ireland debut. 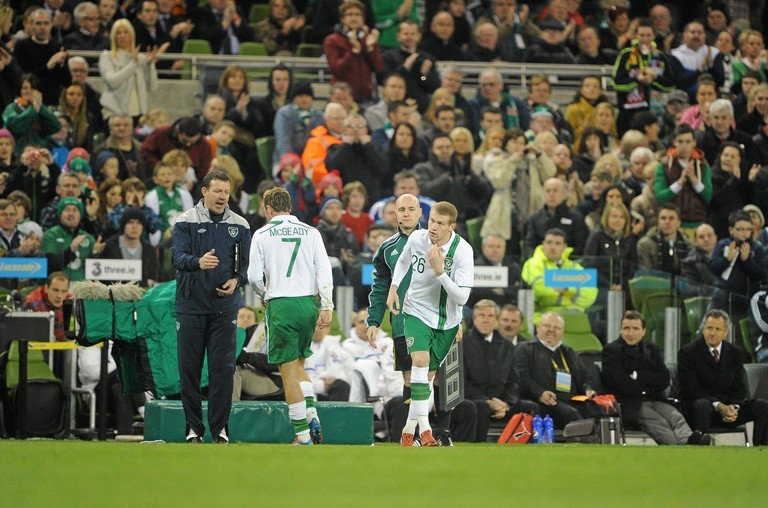 While the goals would not come with such frequency from this point, McClean continued to put in stellar performances for the remainder of the season. By March of that year, he was already being labelled as one of the best players in English football.

As the Euros approached, it was thought the call to include him would be a marginal one. He made the cut.

Unfortunately this would spark what was one of the first instances of what would become a common theme during his time in England.

The player received death threats after the news was announced that he would make the trip to Poland and Ukraine, with messages saying he would be killed if he returned to Northern Ireland. The tweets were deleted in the hours that followed but according to the Belfast Telegraph, but one read:

F*** up your dirty fenian b****** il make sure you get shot when you set foot back into gods country.

Such abuse has become common place in the intervening years, especially after McClean's decision not wear the remembrance poppy.

While both Ireland and McClean had dream of a fairytale tournament, neither would get their wish.

Ireland had a dire tournament, losing all three games in embarrassing fashion. As for McClean, he only saw 14 minutes of action, in the 4-0 loss to Spain.

It quickly became apparent that Trapattoni had been too loyal to the players that had brought him this far, a dynamic which worked against the Sunderland winger. He was a player on fire, one who would have been given a far bigger chance in most other international setups. Ultimately, not handing him a larger role in the team was a missed opportunity for all involved.

Speaking a few years after the tournament, McClean told RTE that he felt he was criminally underused by his manager during the tournament and in the months that followed:

If I’m honest, that knocked me a lot that I didn’t play in the European Championship and it took me a while to recover from that because it was the first time in a long time that I wasn’t being played and I felt that I should have been playing.

During the Euros, I remember thinking that he said at the press conference that I was just there for the experience and I wouldn’t be playing. And then we were 3-0 down against Spain and he throws me on, and I felt a bit insulted really.

Luckily, this did not halt his progress for too long. McClean has become a key player for Ireland over the past eight years, winning 72 caps and scoring a number of hugely important goals. He also was an important part in far more successful European Championships campaign in 2016.

As for his lasting impact on football in Northern Ireland, he has played a part despite never playing for the country at senior level. The IFA have done more to attempt to make Catholics feel welcome and this has translated to a successful period on the pitch.

Certain red flags remain. The anthem is a major sticking point for many players, and some subsections of the Northern Irish support remain less than welcoming for players of a certain persuasion. Still, Windsor Park remains a more welcoming place than it was just a few years ago.

The loss of talents such as Shane Duffy, James McClean, Darron Gibson, and co. ensured this process was rushed along. However, they will continue to lose players to the south, such is the nature of the beast.

One imagines there is little they could have done to keep the former Derry City winger on board. Many things may have changed since 2011, but his attitude to playing for Ireland isn't one of them.

SEE ALSO: The Ireland U21 Team That Stunned Italy In 2012: Where Are They Now?

Football
1 week ago
By Gary Connaughton
Dara O'Shea: The Journey From GAA Prodigy To Premier League Footballer
Previous Next

Football
1 day ago
By Balls Team
Balls Remembers - When Pele Played At Dalymount Park
GAA
2 days ago
By Balls Team
The GAA Players Who've Played Soccer 'Across The Water' XI
Football
1 week ago
By Gary Connaughton
Dara O'Shea: The Journey From GAA Prodigy To Premier League Footballer
Popular on Balls
Football
22 hours ago
By Jonathon Lynam
'He’s Like A Centre Midfielder With The Ball At His Feet'
4