Remember The Time A Dublin Club Attempted To Get Into The Scottish League? 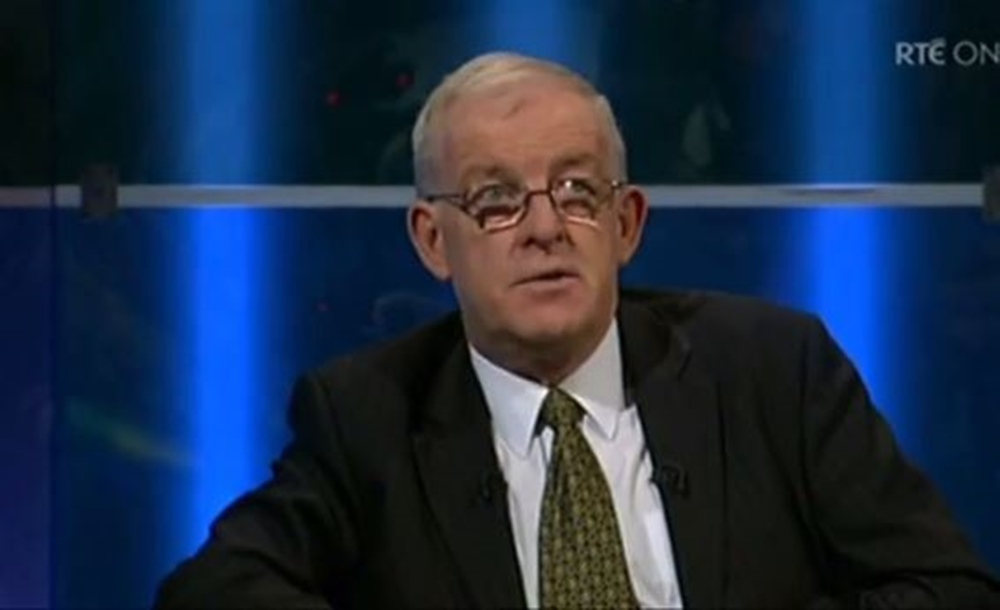 The concerted attempts, back in the 1990s, to get an Irish-based team playing club football in Britain kicked off much earlier in the decade than most people recall.

Doheny & Nesbitts on Baggot Street is more commonly thought of as a rugby pub, but it was from one of its most famous (well, among certain circles) habitues that the idea of planting an Ireland-based club in the Scottish League sprung.

Colm McCarthy was a UCD economics lecturer, a sometime government advisor (usually called upon to advise on cuts in times of strife), a former partner in Davy's stockbrokers (Davy Kelleher McCarthy it was then) and a frequent contributor to RTE current affairs programmes.

Back in the 80s, he was a prominent figure in the part drinking clique, part-journalistic cliche that was the Doheny & Nesbitt School of Economics.

The pub was a favourite of big swinging dicks of all stripes and hues. By all accounts, you couldn't spill a pint in the place without drenching a journalist or an economist or a political advisor. All a Prime Time (or Today Tonight) producer would have to do was wander around the place for a while and ask who was up for appearing later that evening.

In the late 80s, McCarthy advised Charlie Haughey on the cost cutting measures they were embarking upon to bring the public finances under control.

After a busy day, McCarthy used to hang around with Sean Barrett, a Trinity College lecturer and Moore McDowell (brother of Michael) who was out in UCD. It was here, lore has it, that economic policy was thrashed out. The newspapers loved it.

In 'Jiving at the Crossroads', John Waters wrote that all they talked about was economics and football. In fact, they probably gave over as much time to football as economics.

And McCarthy spent the 1990s devoting a remarkable amount of his free time to attempting to bring UK football clubs to Ireland, or as in this case, the other way around.

As we have seen with Milton Keynes Dons, it's the same thing in the end. 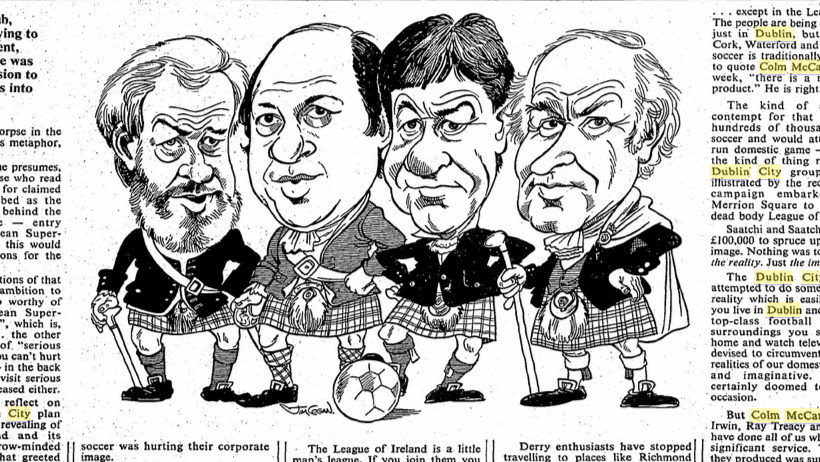 It was their pitch that 'professional club football in Dublin, one of the largest cities in the British Isles, has gone into serious and irreversible decline.'

In Ireland, there was a 'market but no product'.

The humble request was that 'Dublin City' enter the Scottish Second Division.

They anticipated that they would be able to raise £2.5 million were the application successful. It was envisioned that players like Frank Stapleton, Kevin Moran and Mick McCarthy would be enticed to come home to be part of the project.

When it came to the messy question of clubs playing outside their jurisdiction, McCarthy stressed the precedent of Welsh clubs playing in the English League and Berwick Rangers, who although in England play in the Scottish League. And rather ironically, he also cited the example of Derry City moving to the League of Ireland. 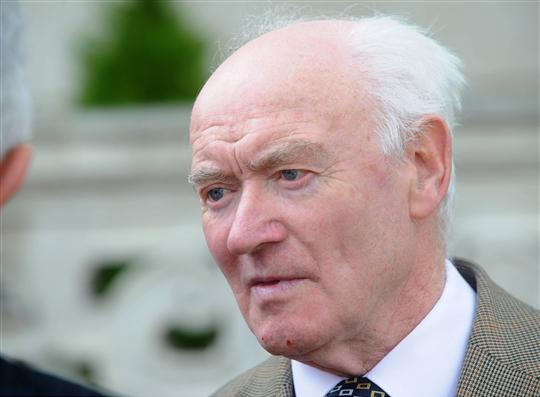 For all the disdain the plan inspired among League of Ireland purists, the backers included some names who now rank among the beloved.

Former Ireland manager and all around Shamrock Rovers legend Liam Touhy and future League of Ireland winning manager, the late Ray Treacy made up the consortium along with McCarthy and Anglo-Irish horse breeding mogul Jonathan Irwin.

The FAI President was not minded to express his opposition to the move in diplomatic tones. Fran Fields emoted that the initiative was 'a stab in the back for the League of Ireland'. The President of the League of Ireland, Enda McGuill both did and didn't comment when he said that he was 'loath to give the project credibility through public comment'.

Unsurprisingly, given his later proclivities, Eamon Dunphy was a vigorous supporter of the move, though on this occasion he had no direct involvement.

As with approximately 75% of Irish journalists in the 1980s, he had fallen out with Vincent Browne by this stage and moved from the Sunday Tribune to the Sunday Independent and an even more high profile column.

Since the abject death of the grand Shamrock Rovers dream in the early 1980s, he had spent a decade or so berating 'the chicken league'. He reserved particular contempt for the scions of administration within the League.

And in his column on the Dublin City plan, he poured scorn on their scorn.

The argument that the Dublin City project constituted a 'stab in the back' for the League of Ireland did not move Dunphy overly much. His considered opinion on that point was that 'you can't hurt a corpse by stabbing it.'

He was also sceptical that the Dublin City idea would undermine the League of Ireland in the eyes of the Irish public.

The idea that the League of Ireland could be rendered any less credible than it is, is amusing not to say audacious.

Outside of the sports pages, the whole thing was treated as a curiosity rather than a proposal with a serious chance of success.

In the opinion pages, Kevin Myers used the opportunity caused by the proposal not to expound upon its wisdom or lack thereof but rather to question the existence of the Scottish Second Division.

'Stenhousmuir' and 'Cowdenbeath', he said, were names dreamt up to convince the English that the Scots were different from them. 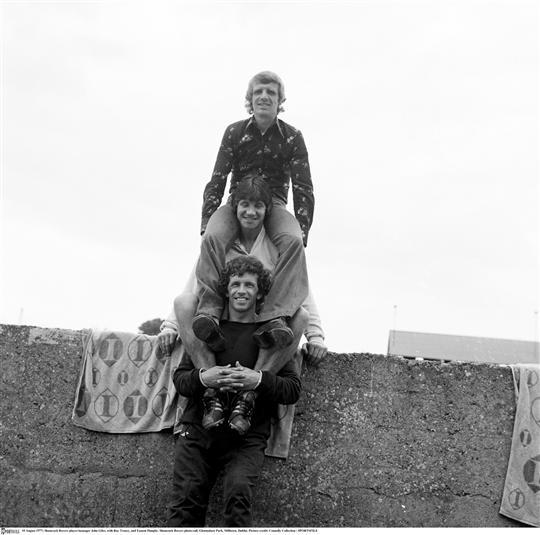 In the end, it was these clubs, which do, by all accounts, exist, which did for the plan. These part-time outfits did not much fancy the idea of a professional set-up from Dublin landing in on top of them.

The plan was shot down swiftly. When it was raised again eight months later, the shooting down was even swifter, if that was possible.

But the idea of an Irish team playing in the UK survived. They had just gone about it backwards.

Four years later, McCarthy alerted Jonathan Irwin, now head of the Irish Sports Council, to the fact that Wimbledon were in need of both a new ground and an influx of supporters.

Irwin wrote to Sam Hammam, the Wimbledon chairman and we know the rest...

You can read about that in greater detail here. 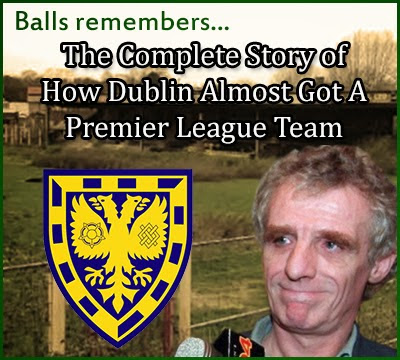