Leeds United are in a serious funk at the moment.

While their injuries issues cannot be ignored, the nature of some of their recent performance will have to come as a concern for the club's supporters.

They were utterly torn apart in the first half against Arsenal this evening, going into the interval 3-0 down and having allowed 11 shots on target in the opening 45 minutes.

The game would ultimately finish 4-1, with Mikel Arteta's side taking their foot off the gas in the second half.

Marcelo Bielsa only knows one way to set up his team, and while it can be very exciting to watch, they are now being consistently battered with some of their first choice XI absent.

Speaking on Sky Sports after the game, Graeme Souness questioned whether the Argentine would be willing to sacrifice some of his approach in order to turn around their recent bad run.

🗣"What's more important to you, is it the style of football you want to play and be on the front foot which is admirable or is it winning football matches?"

Graeme Souness has a question for Marcelo Bielsa for whenever they cross paths pic.twitter.com/7MnQ1eURlG

The former Liverpool captain would go on to wonder how long this approach would be accepted by Leeds supporters, leading to a disagreement with fellow pundit Jermaine Beckford.

Beckford, who knows the city well, said that the fans would never questions Bielsa's methods. However, Souness thinks that will be inevitable if something doesn't change.

Souness: For me, they are being coached in a way where it's all about front foot football. It's admirable and it will get you on the edge fo your seat, but I'm not sure how long supporters will accept it if you keep getting beat 4-1 at home.

Beckford: For any other club I would get that. But with everything Bielsa has done for Leeds and the way he operates in Leeds, not just Leeds United but in the city, he has given the football club and the supporters something so much more than just on a Saturday afternoon playing football.

There is so much more to it than meets the eye. I don't see the fans turning on Bielsa at all.

Souness: The support was fantastic today, but my question is how long does that last?

Beckford: We will see when the regular XI comes back into play, which will hopefully be back in the next few weeks or so, the we will see.

If that was the regular first XI and we saw a performance similar to that or Man City the other day, I would sit back and say 'I get it'.

Souness: But when they've had the strongest XI they're still getting beat. They're still near the bottom.

I think we should be talking about the manager and will that brand of football be accepted by Leeds supporters going forward.

He has nine previous jobs. The most he stayed is two years on average, this is the longest club side he has ever managed. I would suggest that wherever he has been in the past, maybe the supporters of those clubs weren't entirely happy with watching the team play very exciting but getting beat a lot.

Leeds are very new to the Premier League, will they continue to allow it for the next three or four years? I don't think they will. I don't think any team's supporters will.

Bielsa has a huge amount of goodwill built up at Leeds, meaning it would take something extraordinary for them to question the manager.

In saying that, Bielsa has not been shy in walking away from jobs in the past when he felt things were slipping away. We are not at that point yet, although he will want to see a big improvement in the weeks ahead. 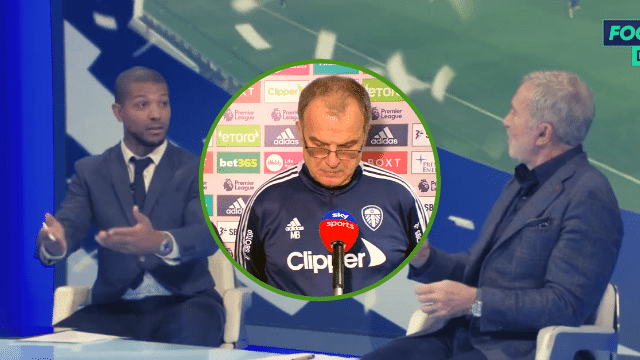