In what is clearly an absolutely pathetic and disgusting attempt to infuriate Celtic supporters ahead of the club's trip to Belfast to face Linfield this week, a banner with a racist message regarding Scott Sinclair has been displayed in Belfast.

The banner was placed on a bonfire in the Avoniel Leisure Centre car park wich according to IrishNews.com is a loyalist bonfire site that is subject to a High Court injunction secured by Belfast City Council as they wanted no further materials to be added to the bonfires.

Images surfaced online and quickly spread as many condemned the disgraceful and utterly stupid banner which has since been taken down. 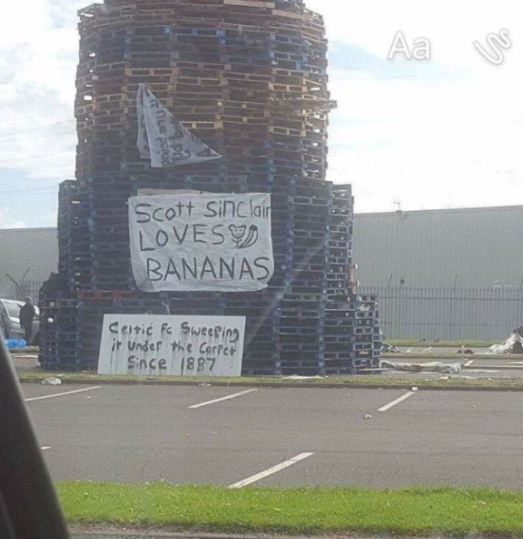 Scott Sinclair was subjected to racist abuse by a Rangers fan last season which saw an outpouring of support for the English winger who responded to the idiotic behaviour with class, and is presumably why he has been singled out once again in this instance.

A statement from the PSNI was released this afternoon after they were made aware of the banner:

We take hate crime very seriously and actively investigate all incidents reported to us. Hate crime is wrong on all levels and the PSNI will do everything it can to ensure that everyone, from whatever background, can live free from prejudice, fear and discrimination.

A disgusting act, hopefully the investigation provides some accountability.

Football
1 week ago
By Gary Connaughton
Report: Lee O'Connor Set To Join English Club On Loan For Rest Of Season
1

Football
1 week ago
By Gary Connaughton
Report: Lee O'Connor Set To Join English Club On Loan For Rest Of Season
Football
2 weeks ago
By Maurice Brosnan
Former Rangers Chairman Fires Back At Celtic Fans 'New Club' Claim
Football
3 weeks ago
By PJ Browne
Line Of Duty Star Missed Mourinho Training Session Due To Paolo Nutini And Prince
Popular on Balls
Football
2 hours ago
By Gary Connaughton
Watch: Keane Vs Carragher Was Even Better Than The Liverpool-United Game
4

Football
6 hours ago
By Gary Connaughton
McCarthy Stresses Form, But Will He Practice What He Preaches In Irish Midfield?