Heartbreak & Cringe: 9 Standout Bits From 'Sunderland Til I Die' Season 2

The second season of Netflix's 'Sunderland Til I Die' premiered on April 1st. The show goes behind-the-scenes of the English club as they aim to gain promotion from League One in the 2018/19 season.

The first season of the show saw the club suffer back-to-back relegations as they fell from the Championship a year after dropping out of the Premier League.

At the time, Martin Bain - a man as close to David Brent as you could get in real life - was the chief executive and American Ellis Short nearly a decade into his ownership of the club.

At the end of that season, new owners arrived in the form of Stewart Donald with Charlie Methven as executive director.

Anyone worried about the loss of Bain from the series need not fret, Methven brings plenty to the table to make viewers cringe.

'You know like those massive raves... A bit Ibiza'

Ahead of the new season, Methven thinks, new owners means new tunes. He wants rid of Prokofiev's 'Dance of the Knights' (what many would know as the theme tune to the BBC's Apprentice) and instead to have match build-up music which will create a raucous atmosphere at the Stadium of Light.

"This is Dance of the Knights, right, which for some people has some associations with glorious times past, for that short period of time at the Stadium of Light when everything was going well," he tells staff in a meeting.

Head of media Oscar Chamberlain punctures Methven's plans, saying, "One thing I would say is it doesn't matter what you play unless you get a new PA system".

There isn't a single bit of this Sunderland 'Til I Die s2 clip that isn't *chef's kiss* pic.twitter.com/2SxSqCeHsf

Still, Methven ploughs on. His idea: Tiesto's 'Adagio for strings'.

Charlie Methven: I don't want people to feel like they're being assaulted but it needs to have a bit of thump to it.

Frankie Francis: You want it to be some sort of club atmosphere, almost like a nightclub.

CM: Yeah, or at least a very large scale one. You know like those massive raves, it's wasn't a nightclub - sometimes it was - but it was quite a lot bigger than that.

FF: You want a Balearic theme, like a big superclub?

"We want this to be a venue and a place where away fans and away players and away managers think when you go to Sunderland, as they say up here, 'You get nowt'," Methven says.

"Everything is against you, the crowd is against you, the music is loud, the atmosphere is massive. It's all set up for the home team. That just hasn't been the case here for the last ten years; what used to be a very intimidating place has become a soft touch.

"If we're going to have a successful season, Sunderland simply cannot have the disastrous home record that they've had in the last ten years - it's got to become a fortress."

And he's going to do that by turning the Stadium of Light into Pacha. 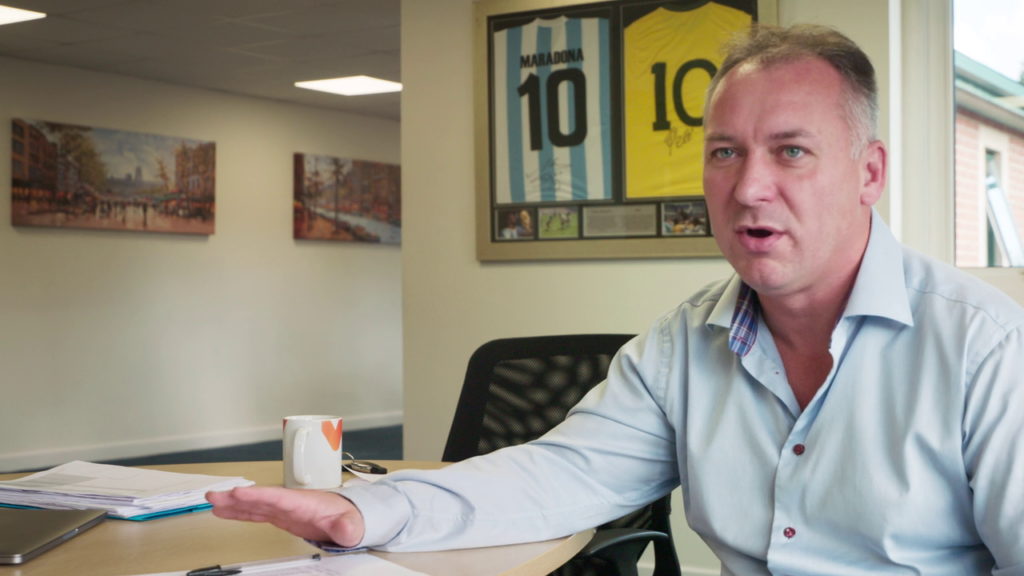 While on a cost-cutting mission, Stewart Donald makes a discovery. The only person using the club's expensive cryo chamber was former CEO Martin Bain.

"And they said, 'Well, Martin Bain went in there for his back occasionally' was the answer that came back. I asked, 'But what players use it?' [They said], 'Oh, no one uses it'.

"There are hundreds and hundreds of examples, just spending money without asking a single question as to why they're spending it."

'The place was an absolute shit show'

"In an ideal world, we'd be here for a quite a while because we both absolutely adore football and we both know that we will never again run a football club as big as this," he says.

"A lot of fans don't realise how bad financially the situation got to. The place was an absolute shit show. The staff didn't understand that and had no conception of it which is really disturbing.

"Up to and including the finance department, they didn't know where the money was. The entire culture was at the end of every month, what we do is we send a bill to a rich man in Florida and he signs a check and that's it. 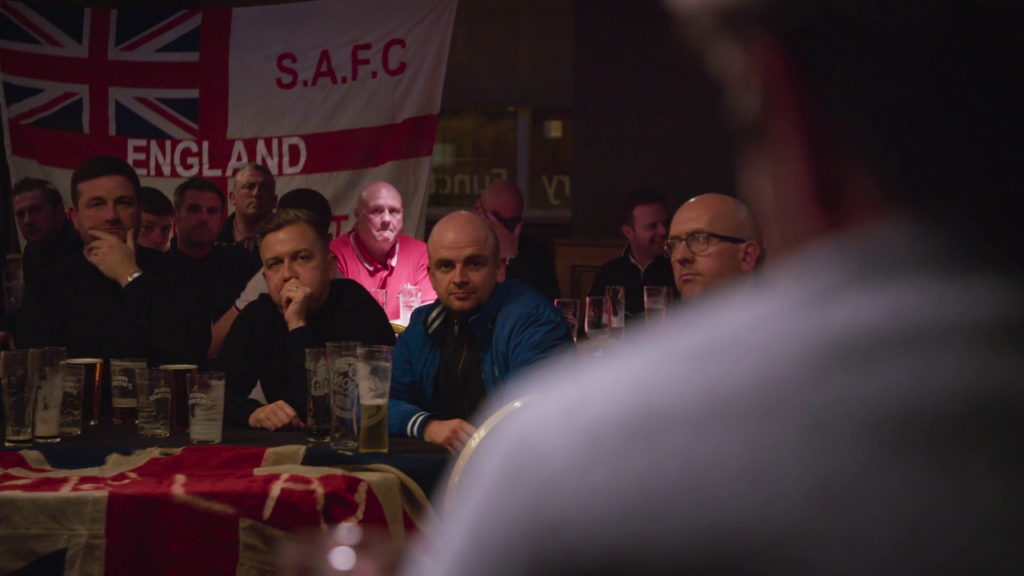 "Our view is that really strong organisations, and healthy, proud organisations can run well and fund themselves. There's a moral point to it: if it's run out of its own revenues, those revenues are your revenues - they're the fans' revenues. And that makes it the fans' club. Once it's being funded by a rich man, it's not your club - it's his club. If you're worried about becoming irrelevant, you become irrelevant at that point.

"When you're a club as big as Sunderland with the potential Sunderland, with the history that Sunderland has, it's up to us to put in place the structures, the philosophies, the mechanisms which drive the revenues up and means that we are properly sustainable.

"Then you'll be able to look at us and say, 'It's our club. We pay for it. You guys administer it but it's our club'. That's where we want to get to."

'Tell them to get a fucking number'

Methven decides the club should aim for the highest ever attendance for a League One game. The match targeted is the St Stephen's Day game at home to Bradford. 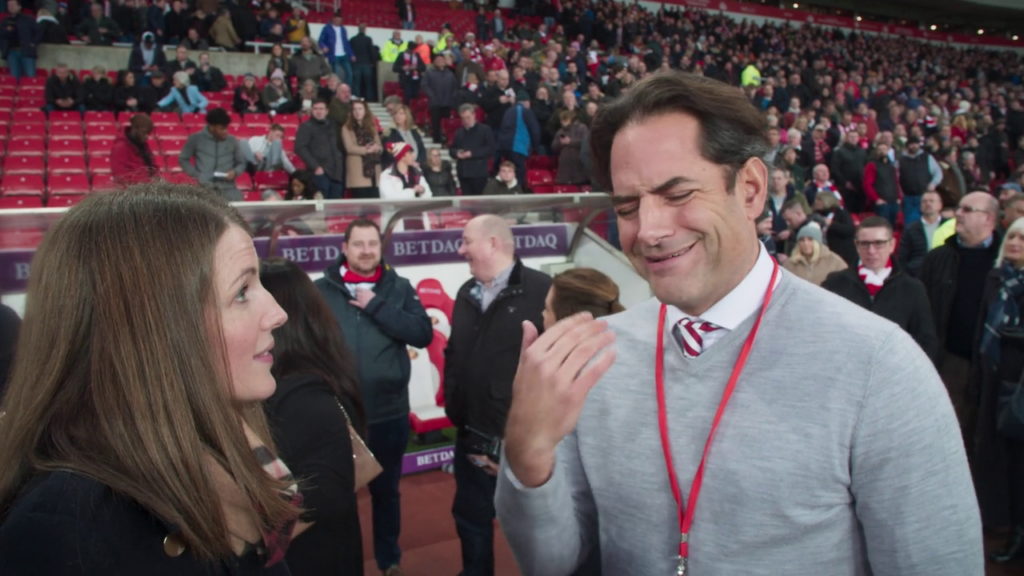 At half-time, with Methven looking to make the announcement that the record - previously held by a 2008 Leeds vs Gillingham game - had been broken, it gets tense between him and corporate communications manager Sophie Ashcroft.

SA: The attendance figure, I don't know at this point whether we'll be able to get it because they're still counting.

CM: Where have they go to?

SA: I'll find out for you. I'll give Steve a call. I know they're working so hard to get it done... They're corroborating the home number with the ticket office.

CM: You've got about five minutes.

CM: No, Sophie, sorry. We fucking get it, and if we're 200 out it doesn't matter. I'm not officially reporting it. I'm not the one sending it to the Football League, that's Brett.

SA: The team are working hard.

CM: Tell them, just fucking tell them. I'm not a corporation, I don't need to be treated like a fool. Tell them to get a fucking number. If it's 200 out, it's OK.

Academy graduate Josh Maja is the star of the first half of the season for Sunderland, scoring 16 goals. The problem: his contract is up at the end of the season and neither the striker or his agent are amenable to signing a new deal with the club.

The big worry is that the agent - who has experience of moving players abroad - could do so with Maja, meaning that Sunderland would get nowhere near his market value. 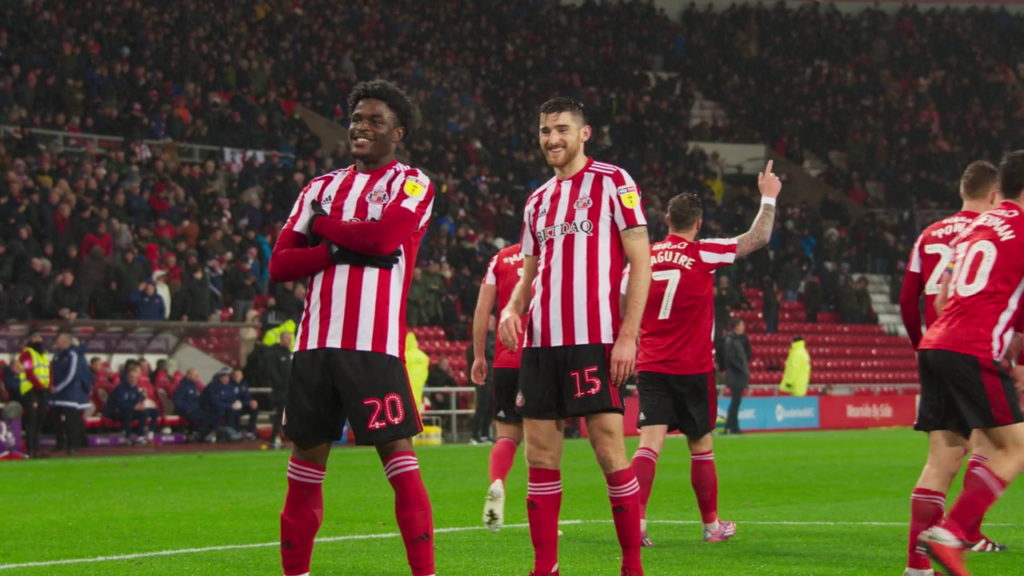 At one point, Maja plays it cool when asked about rumours regarding him moving to another club.

"About who? About me?

"I don't really read newspapers like that. There was? Hmmm. That's interesting."

The player eventually moves to French side Bordeaux in the January transfer window.

"People told me it would play out this way," says Stewart Donald.

"Negotiating with Josh, it's all moving along and Jack [Ross, club manager] called me and said, 'Thanks very much, Josh has come in, picked up his stuff and said he's gone'. You could have told me you'd accepted an offer'.

"And I said, 'Hold on a minute, I haven't done anything. I haven't accepted anything.

"I haggled the best I could. We ended up with I think it was €1.5 million. It's not a great deal but it's the best we could get. A million euros isn't work anything in comparison to promotion."

Towards the end of the January window, the club - and Stewart Donald in particular - get desperate to sign a replacement for Maja.

Will Grigg is their main target but Wigan are playing hard ball in negotiations.  Donald puts in what he says is a final take-it-or-leave-it bid of £1.25 million. 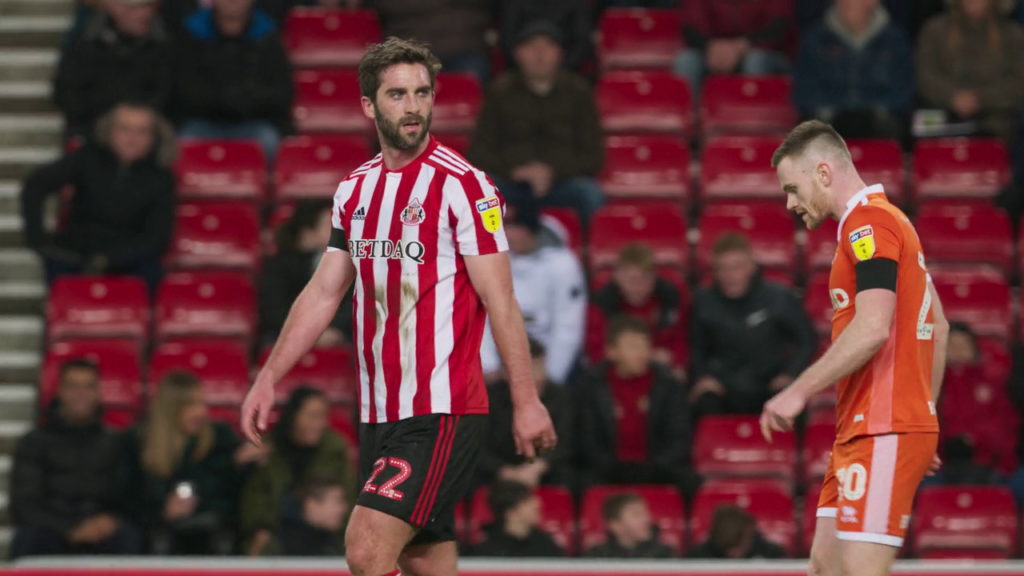 Manager Jack Ross tells Donald: "To best honest Stewart, I know this is not the ideal way to look at it, but see with the offer you've put in, he's not worth any more than that - not a chance."

Despite that advice, Donald goes back with several more offers - six in all. As the window is about to close, at £3 million, he makes Grigg the most expensive signing in League One history.

'I just want to get back onto my idea, 'cause I want to make more money'

The club reaches the final of the Checkatrade Trophy. Supporters see it as a chance to win silverware. For Charlie Methven, it's a chance to make money.

"You can probably end up making a million quid on the day between your ticketing and retail," he says.

"We just want to make sure all our ducks are in a row."

Supporter liaison officer Chris Waters asks if they could introduce a phased ticketing scheme for non-season ticket holders who have been to Checkatrade games. Essentially, ensure those who supported the team in the earlier rounds of the competition would get slightly cheaper tickets.

"Love the idea," says Methven, "but I just want to get back onto my idea 'cause I want to make more money.

"We must be seen to be fair but at the same time, we must act in a businesslike way and make as much money as possible because that means the business can flourish."

'His missus had a real bite at me as well' 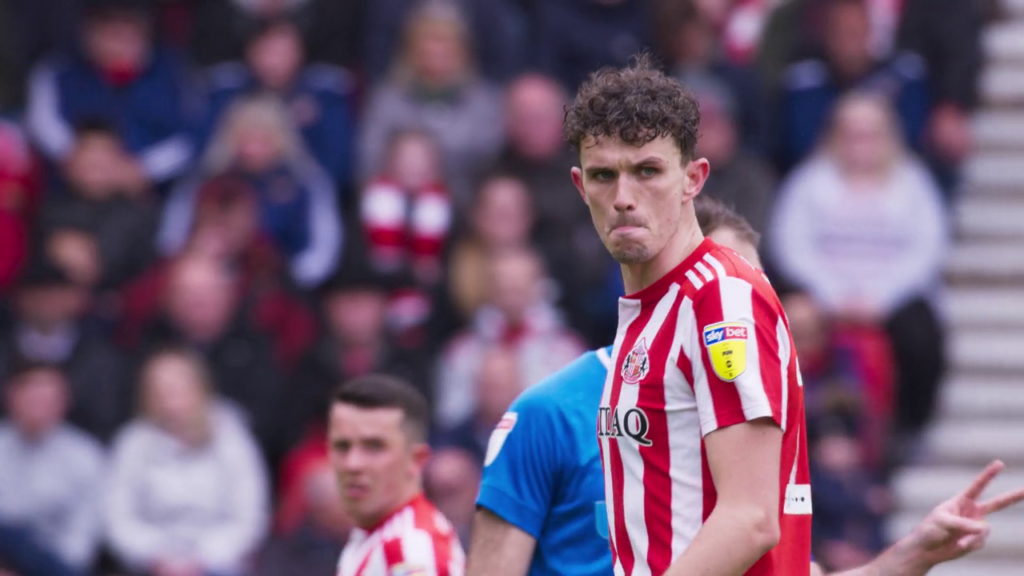 "I was in Tesco yesterday with my missus and new-born baby," says centre-back Tom Flanagan at the beginning of the final episode.

"A bloke came up to me and started slagging me about the game on Saturday.

"It was just completely out of the blue and I said, 'Excuse me?' and he just said, 'What happened Saturday?' I was like, 'Just one of them games'. He said, 'It's not fucking good enough, is it?'

"And then his missus had a real bite at me as well.

"They're looking at you like you're not even trying. And you're thinking, 'Well, actually, I am trying'. So, it's difficult."

'I'm fucking heartbroken. I feel like crying in front of you'

After Sunderland lose the playoff final to Charlton through a 94th minute goal, supporter Michelle Barraclough cuts a forlorn figure starting with her husband at Wembley. "Why is it never us celebrating? Why is it never us?" she asked. 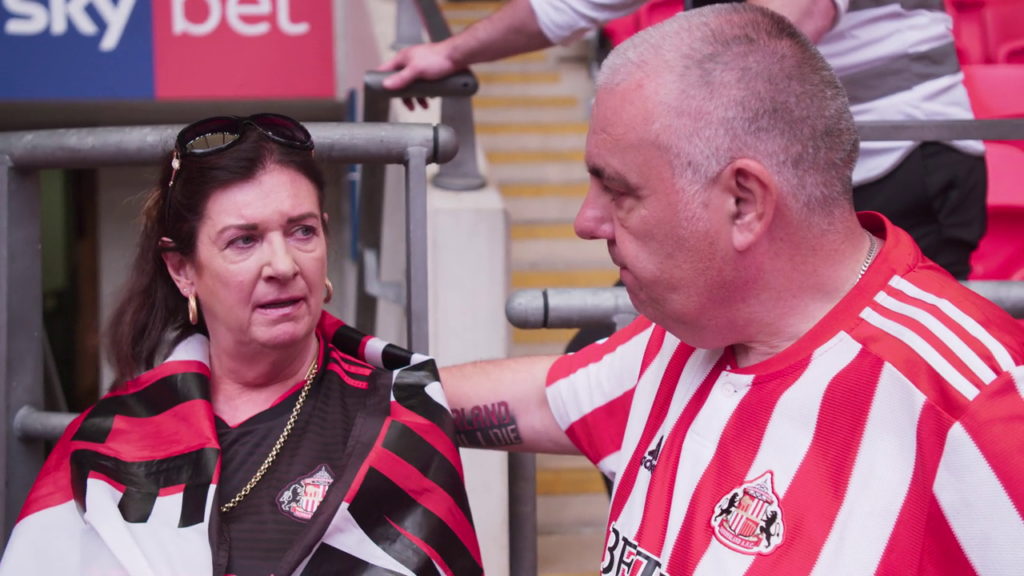 Another supporter meets Stewart Donald while leaving the stadium.

"I shook your hand the last time," he tells the owner.

Quiz: Name Every Nation Republic Of Ireland Has Played Against

Quiz: Can You Identify These 14 People From Netflix's 'Tiger King'?

Football
8 months ago
By Andrew Dempsey
Troy Parrott And Gavin Bazunu Shine On Another Promising Night For The Irish In League One
Football
8 months ago
By Andrew Dempsey
Report: James McClean Set To Join League One Side After Stoke Contract Terminated
Football
2 years ago
By Maurice Brosnan
Six Irish Managers Abroad Who Could Have A Big 2019/20 Season
Popular on Balls
GAA
3 days ago
By PJ Browne
Mayo's Padraig O'Hora Using Football To Promote His Real Passion
Rugby
1 day ago
By Colman Stanley
'That Pace, That Intensity, That Organisation' All Black Legend Has High Praise For Leinster
GAA
1 day ago
By PJ Browne
Jim McGuinness's Gut Tells Him Dublin Will Win The All-Ireland
The Rewind
2 days ago
By Eoin Harrington
Watch: Brilliant Dermot Morgan Dublin Segment From 'The Travel Show' Resurfaces