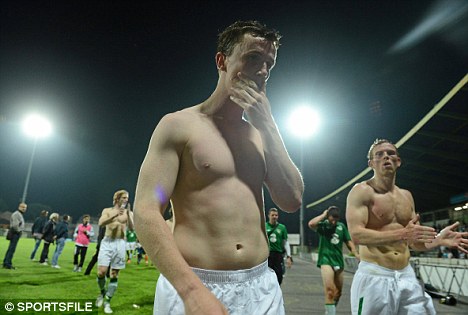 In the face of some bogus treatment by Giovanni Trapattoni, Kevin Foley proved himself to be a true professional in the last 24 hours. Not only did he manage to keep his composure and not leave Montecatini immediately after receiving the news yesterday that he'd been dropped for Euro 2012 - which came a half hour before the UEFA 23-man squad deadline - but he somehow soldiered through 45 minutes of football.

‘The lads have been great with me, but there’s nothing I can do about it. It’s hard to take. I sort of feel betrayed. It’s just one of those things but it feels like a kick in the b***s.
‘I wanted to play tonight, I wanted to prove a point, that I was fit to play. I could have trained last week and been involved in the game, but he said there was no rush, that they could wait for me to train in Italy. So I trained in Italy for two days and felt great and then all of a sudden he pulls me this morning just before the end and told me I wasn’t in the squad. That was hard to take.’

And there's Paul McShane walking in his shadow. Sport is cruel.