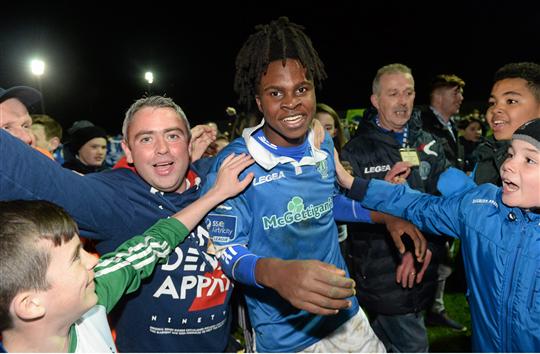 Finn Harps got a dramatic extra-time winner against Limerick on Friday night to claim promotion to the SSE Airtricity League Premier Division.

Trailing Limerick 1-0 from the first leg of the promotion/relegation playoff at Markets Field on Monday, Harps got a first half equaliser through Michael Funston.

Here's fan footage of the goal thanks to Daithi Ramsay.

Final whistle blown, Banda went into the crowd to celebrate with his mother.

BJ Banda ran into the crowd to celebrate with his mother. We love this! @FinnHarpsFC . #UTH #PremierLeague pic.twitter.com/muc2eBQXtl

This was the commentary for the goal on BBC Radio Foyle.

And the post-match celebrations.