The authorities heading the search for missing Cardiff City striker Emiliano Sala have revealed that a body can be seen on video footage taken from the wreckage of a plane, thought to be the one the Argentinian and pilot David Ibbotson were travelling in when they lost radar contact on January 21st.

The Air Accident Investigation Branch located the stricken Piper Malibu N264DB four miles of the Guernsey Coast yesterday morning, and having deployed a remotely operated vehicle to examine the seabed, they have been able to confirm details.

Tragically, in video footage from the ROV (remotely operated vehicle), one occupant is visible admist the wreckage.

The AAIB is now considering the next steps, in consultation with the families of the pilot and passenger, and the police.

As well as releasing this statement, the AAIB have also released still imagery taken from the search vehicle, showing the fuselage of the aircraft, with '264DB' clearly visible to the naked eye. 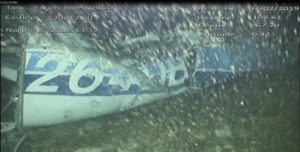 Sala signed for the Bluebirds on January 19th for a club record transfer fee, somewhere in the region of £15 million and had returned to Nantes to settle personal affairs, before boarding the private plane to head back to Cardiff on that Monday evening.

An initial search and rescue operation was called off, only three days after contact was lost, which led to a huge crowd funding effort raising more than £250,000 to enable a private searach to take place.

That process got underway over the weekend with the plane located by a team led by marine scientist David Mearns.

Mr Mearns confirmed that the search vessel FPV MORVEN had found the plane via Twitter.

Wreckage of the plane carrying Emiliano Sala and piloted by David Ibbotson was located early this morning by the FPV MORVEN. As agreed with the AAIB they moved the GEO OCEAN III over the position we provided them to visually identify the plane by ROV. #EmilianoSala

The families of Emiliano Sala and David Ibbotson have been notified by Police. The AAIB will be making a statement tomorrow. Tonight our sole thoughts are with the families and friends of Emiliano and David. #EmilianoSalas #NoDejenDeBuscarAEmilianoSala

Cardiff City have yet to comment on the latest update provided by the AAIB in this morning's statement. The Welsh club paid emotional tributes to their player in last Tuesday's game against Arsenal at the Emirates, and again on Saturday, when Neil Warnock's side were able to overcome Bournemouth at a highly charged Cardiff City Stadium.

Goalscorer Bobby Reid held aloft a t-shirt with Sala's face emblazoned upon it, when he put the Bluebirds i front from the spot.

Speaking to TalkSport, Mr Mearns said that identifying the body had still not taken place.