Brave Dundalk Crash Out Of Europe Despite Spirited Display

“They say the teams reflects the managers – but if that’s me then I’m in a fucking dark place.” – Dundalk interim boss Jim Magilton after his side lost 5-1 away to Bohemians in May 2021.

At the time, Dundalk were a mess. No manager. No plans. And there was even a bit of supporter unrest to pile onto that misery.

But incredibly, almost three months on from that nightmare at Dalymount Park, they have pulled themselves up from the rubble on that occasion.

Although, they could not make it a Hollywood ending as they crashed out of Europe at the expense of Vitesse Arnhem in the Europa Conference League.

It is no secret that European football is the be all and end all at Oriel Park given the vast rewards on offer with it all.

With that in mind, perhaps it was no surprise that they would improve themselves for European competition come the summer, however.

And this Dundalk side, are well used to the European stage. Whether its Tallaght or at the Aviva, they have seen most, if not all of it before.

Few of them, however, would have ever experienced exactly what they went through during the first couple of months of the 2021 League of Ireland season.

Whether it was the bizarre pre-season press conference that saw Filippo Giovagnoli usurped from his position as manager ‘in name’, or it was the mixed messaging from the boardroom, this group of players could not have envisaged what was to come.

And after coming through what looked to be a dismal start to the season after ending Shamrock Rovers’ record-breaking unbeaten domestic record, the wheels came off again.

Funnily enough, Dundalk started that game well, but once they fell a goal behind, that was it. While it was 5-1, it could have been so much more. 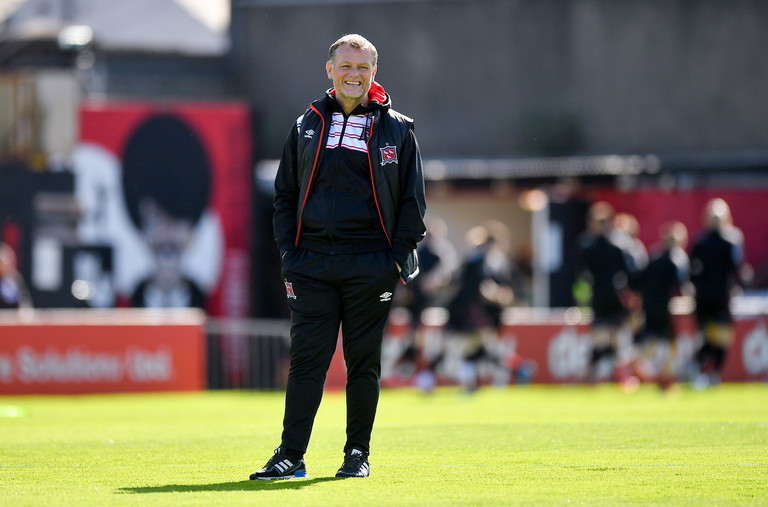 “We need a clear out. This place needs a clear out,” Magilton said after that game in Dalymount.

“You need to have good players who can handle that pressure of playing for us.

“You have to have players who can do that, and I think at the minute we don’t have them.”

It became apparent that Jim Magilton was not going to be manager at Oriel Park after that humiliation, but we would still have to wait for a name to be mentioned.

Jim McGuinness was linked, as was Robbie Keane. Mark Kinsella too. But they went with a familiar face in Vinny Perth who returned to the hot seat he vacated in August of last year.

And while the league form has remained patchy, Perth’s return has brought stability back to the club, albeit not in the way they would have been used to under former boss Stephen Kenny.

And that return to stability almost yielded its reward on fine summer's night in Tallaght.

But even then after that, longtime servant Chris Shields would leave the club to join Linfield.

Patrick McEleney also confirmed his intention to leave, signing a pre-contract with his hometown club Derry City. Surely that’s no way to prepare for a possible European run?

Welsh side Newtown were seen off with ease over two-legs. And then they came through a scare against Estonian side Levadia Tallinn, winning 4-3 on aggregate to set up a tie with Dutch side Vitesse Arnhem.

With Dundalk being the seeded side in that game, it was a cruel draw for the Lilywhites, and few gave them any hope of coming through the first-leg alive. But alive they were.

And they were not just alive. They were swinging and landing against their Dutch opponents.

We even had one of the great League of Ireland goals in Europe from McEleney to bring the tie back to Ireland on a knife-edge.

OH MY WORD! That is special from Patrick McEleney! 😲@DundalkFC have come from behind to lead against Vitesse, and what a goal it was from McEleney!

Unbelievable skill, composure, and audacity to pull off the finish. WOW. 🤯

It could have been so much better if Dundalk had held out at the death before Lois Openda equalised in the 89th minute, but it was job done.

They had hope. And compared to back in May on that scarring day in Dalymount Park, it was more than they could have ever hoped for.

While it may take a while for Dundalk to return to its heyday under Kenny, football is a fickle game. It does not take much to get a fanatical town behind you once again.

So much so that they sold out their 1,500 strong allocation for their second-leg against Vitesse.

To put that into context, they had failed to sell 1,000 tickets for their last visit to Tallaght for the clash against Levadia.

Expectations were high, and a noise reverberated around Tallaght Stadium as kick-off approached in Dublin 24.

This was Dundalk, and this is exactly what it can be like when success and excitement go hand in hand.

Vinny Perth's charges went into the game as rank underdogs again against their Dutch opponents,

And they made three changes from their first-leg draw in Arnhem, with the main talking point being the omission of David McMillan in place of Patrick Hoban. It was not a bad replacement, however.

Vitesse, on the other hand, made two alterations themselves from their 2-2 draw at home against the Lilywhites, with one enforced.

Lois Openda missed out after being brandished with a red card late on, with Oussama Darfalou coming in to take his place.

But they were once again able to call upon the services of Danilho Doekhi, a transfer target of Glasgow Rangers.

By no means was this a Legia Warsaw that Dundalk were coming up against, but this was a stiff, stiff test for the Lilywhites.

Aware of this from the start, a strong Co. Louth support travelled down in their droves looking to rattle their visiting party from the start, beginning during the warm-ups.

The Vitesse players were unable to even take shots on the keeper without being jeered for their misses.

That noise ratcheted up another notch as the players made their way out onto the pitch, with excitement reaching fever-pitch.

And that noise looked to have yielded its reward after just 40 seconds through a Michael Duffy goal.

The returning Hoban clipped a ball across the pitch, where Michael Duffy was on hand to beat Makus Schubert at his near-post.

That was lift-off, well it was for a brief moment until the flag was raised for a marginal offside call.

Perth's charges did their level best to continue that relentless start, with Hoban then just about unable to get a touch on an inviting Duffy cross into the box.

Of course, it was not as if Dundalk were all over Vitesse at that point. They did have to withstand a couple of early scares, with Sonni Nattestad on hand to clear with a typically booming clearance to relieve the pressure that was building.

Not that was a flash in the pan either. The hosts, perhaps egged on by a vociferous home crowd, looked a real threat going forward.

Patrick McEleney went close, as did the powerful Nattestad, but neither could break the deadlock.

Then, however, Tallaght went silent. Nikolai Frederiksen had a shot that was blocked by Andy Boyle, with Matus Bero on hand to bundle it home.

1-0. And that early promise looked to have seeped away.

If it was quiet then, it was about to get even quieter moments later. Vitesse broke down the Dundalk right flank to make it 2-0, and all but end the game as a contest.

Sondre Tronstad fed the ball to Yann Gboho who peeled off his man, making no mistake while bearing down on Abibi.

Who knows, maybe Dundalk had little right to compete with their Dutch opposition given their domestic troubles, but it was the hope that killed them.

So much so that Cameron Dummigan had a cross into the box, that Schubert made a mess of, with nobody on hand to halve the deficit.

And that, in a nutshell was the story of the half. Dundalk could not score, nor could they defend. Vitesse on the other hand could score. That was the difference.

Football is a fickle game, and it was on show no more than in a second-half that looked to have lost its way a little bit, before Dundalk halved the deficit with just over 20 minutes to play. 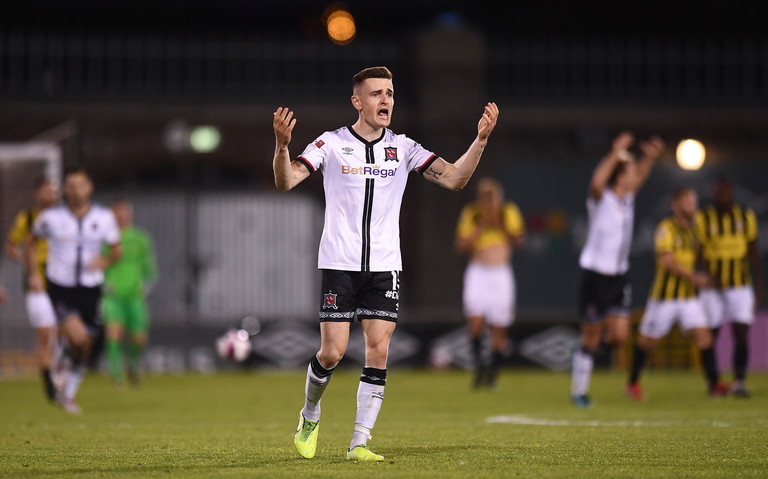 Duffy was felled by Tronstad in the box, earning his side a penalty that Hoban would convert. At last, hope again for Perth's side.

No messing from Pat!!! pic.twitter.com/Mxpy72MsNN

This felt like Hollywood movie stuff. We've seen this script before. Hopelessness turns back to hope, and then into unbridled joy. But unfortunately it was not to be, in the end.

McMillan did his best to turn it intio joy with a bolt from distance that flew wide as Vitesse began to wilt.

Duffy then forced a smart save from Schubet, before Latvian international Raivis Jurkovskis saw his header saved on the line by the increasingly pressurised Dutch netminder.

But at this stage, the clock was going against the hosts. And even then, there was one last chance for them to bring it into extra-time.

Sub Daniel Kelly turned on a sixpence to put the ball into the six-yard box, but Hoban could not get his foot to the ball in time.

And that was that, unfortunately for Dundalk.

But by God, was this a performance to be proud of, despite the heartbreak at the end as they look to lay the seeds for a more stable future. If they do that, they have a right chance. 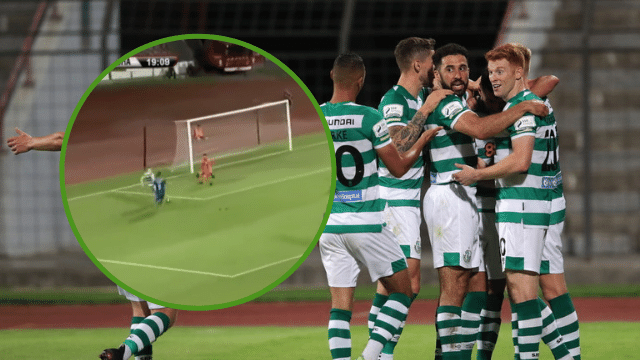 Football
3 days ago
By PJ Browne
Marc Bircham Says He Heard About Waterford Sacking On Twitter
Football
3 days ago
By PJ Browne
Waterford Sack Marc Bircham Just Days Before Massive Playoff
Football
2 weeks ago
By Donny Mahoney
Shamrock Rovers Serve 'Indefinite Bans' To Two Fans Over Fireworks Incident
Popular on Balls
Football
1 day ago
By Gary Connaughton
Hargreaves Thinks United Are Overlooking The Obvious Candidate For Next Manager
Football
1 day ago
By Gary Connaughton
Roy Keane Once Tipped Off Ronan O'Gara About Oncoming All Blacks Onslaught
Football
12 hours ago
By Gary Connaughton
Frank Lampard Has Weighed In On That Old Gerrard & Scholes Debate
Football
14 hours ago
By Eoin Harrington
Just Who Is Ralf Rangnick And Why Did Manchester United Want Him?