This World Cup continues to bewilder. Last night the tournament favourites were dumped out by a Roberto Martínez managed side. Brazil bowed out 2-1 against Belguim as Neymar and co. were left to reflect on another World Cup knockout at the hands of European opposition.

After returning from injury and showing promise against Mexico, Neymar flattered to deceive last night. The PSG Striker seem preoccupied with trying to win a penalty instead of playing football. His behaviour and diving had been scrutinized after a Swiss broadcaster tallied up the total time he spent on the floor. 14 minutes, as it turns out.

"Two goals, little brilliance and simulations" was the headline on Brazilian daily Lance. It was accompanied by a picture of the 26-year-old grimacing and covering his face. He was once the golden boy of Brazilian football, but the same publication continued by asking why 'Neymar's generation' was failing.

In the immediate aftermath of the game, head coach Tite did his best to ensure the blame was not placed at Neymar's door.

I do not want to put anyone in doubt. I do not want to talk about individuals. I understand soccer as an overall context. I think we dominate and create more opportunities: 27 shots against nine in total. Belgium's effectiveness was getting goals with fewer chances.

However, Spanish journalist Diego Torres of El Pais suggests Neymar's lifestyle impacted his contribution: 'Neymar pretended to live all year as if professional football bored him and reserve the emotion and mental energy for the decisive duels of the World Cup. '

In Folha, Neymar's decision-making and dive were highlighted as indicative of Brazil's failings.

You need to dribble. but Brazilian players make the error of thinking it's the best plan even when faced with two or three markers. That's what led to Neymar diving near Toby Alderweireld, asking for a non-existent penalty.

O Globo, also focused on this aspect of Neymar's game as well as the team's creative failings.

Neymar had plenty of chances to shine, but made poor decisions. And Brazil still lacks a Kevin De Bruyne – a true star midfielder, who plays from one box to the other.

As for Extra, their front page opts for of the most memorable sh0ots of the tournament, with a brief description: 'Neymar no chao,' translated as Neymar on floor. 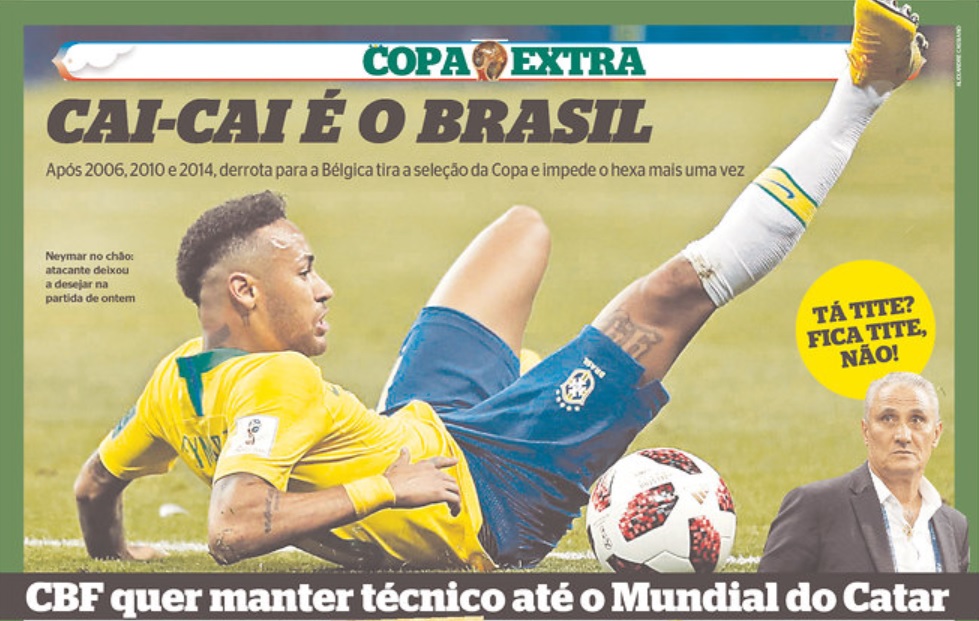 Overall there is no hysteric reaction akin to the 7-1 disaster of 2014. Neither is the entirety of the blame laid at Neymar's door, Fernandinho comes for widespread criticism with Lance awarding him a 2.5/10. For Brazil and South America, the sad reality is that it will now be at least a 20-year stretch of solely European winners.