Souness Is Wrong: The Super League Disaster Starts At Home

Firstly, I must begin this piece by stating on the record that I am an American, though I have lived in Ireland for 17 years.

As an American with strong interests in the sporting culture of this island and the one beside us, I've been stunned and disgusted at the events of the 72 hours in English football. I was a fan of the Boston Red Sox in 2002 when John Henry and his FSG colleagues rode into town on a white horse and revived the city's chronically mismanaged baseball team. If ever there was such a thing as benign billionaires, it was these guys. FSG did a similar salvage job in Liverpool. Up until the pandemic, most Liverpool supporters seemed relatively content with how the club was run.

But there's no sugarcoating this. In terms of inspiration and execution, The Super League has been an unmitigated disaster unrivalled by anything we've ever witnessed in 21st century sport. FSG and the Glazers - as the owners of the UK's two leading football institutions - must bear special responsibility here.

However, in the aftermath of the collapse of The Super League, American billionaires have become a convenient punching bag for the chronic mismanagement of English football. These billionaires do not need defending, and The Super League was an example of American naivete at its dumbest and most dangerous, but it's truly disappointing to see foreigners become scapegoats when the real enemy to English football lies within.

If you watch Sky Sports's coverage of the revolution over the past week, you could easily think that these American plunderers arrived in the country under the cover of darkness, and that the existential threat of greed is a relatively novel concern for the sport of English football.

The worst of this guff was spouted by an emotional Graham Souness on Sky Sports last night, who made an unexpected claim of British exceptionalism when talking down on the Super League. "We’re not America... Britain’s a proper country," he said.

Souness going in above the knee: ‘We’re not America ... Britain’s a proper country’ pic.twitter.com/3AygPFeB0L

This is not so. No proper country would have voted for Brexit. We'll admit that Britain has its share of great institutions - like the BBC, the NHS and doubledecker buses - but I can't stand here and let the country of my birth be the fall guy for the UK's thirty-year long debasement of its own national sport. If Britain was truly a proper country - if the likes of Boris Johnson and his Tories chums valued football as much as they claimed to this week - then the people who run its football leagues and enforce its laws would have stepped in years ago to protect it.

Instead, the Premier League stood idly by as its top clubs were taken over by oligarchs and petrostates. American billionaires didn't pounce out of a helicopter at the Emirates and Old Trafford like Navy Seals to stage a coup of the Premier League's biggest 'franchises'. They were invited in the front door by both the Premier League and, tacitly, by the UK government. Thirty years of outrageous greed and avarice got the Premier League to this place. Americans merely had the gall to make more money out of it.

We've heard so much about these invaluable football 'institutions' over the past week, but only five clubs of the 20 Premier League clubs are majority owned by Britons. Since the days of Thatcher, the British government has routinely shown contempt for working people. Talk to supporters of Wigan or Hull or Bury about greed in football.

This past week, Sky Sports has become the voice of the people. It's made for great television and the arguments from Neville, Carragher et al against the Super League cannot be countered. However, we cannot act as if Sky Sports and its billions of pounds have not played a role in bringing English football to the precipice it finds lurching back from today.

That said, it was interesting to see Jamie Carragher question Sky's role in the creation of the Premiership.

Carragher calling out SkySports for the hypocrisy👏🏻👏🏻👏🏻 pic.twitter.com/lVCFVAGgUS

We have a phrase in America. Don't hate the player, hate the game. The furore over The Super League presents an opportunity for the football family to confront uncomfortable truths, and possibly even heal. The Premier League needs reform and regulation. There needs to be a distribution of wealth across of all of Europe's football clubs. If the solution is Blame America and run the Yanks out of town, then who'll be blamed when the whole thing comes crashing down in a few years time? 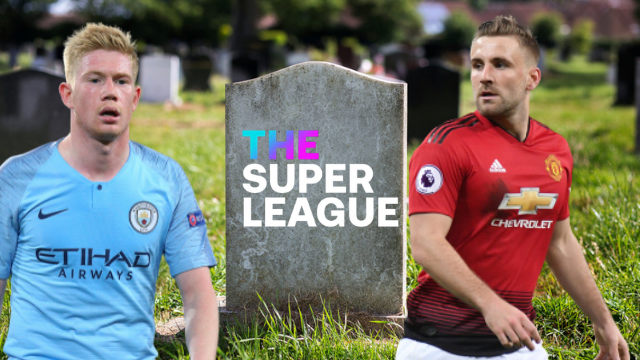