This Time Last Year, We All Became Bundesliga Fanatics

This time last year, we were all starved of sporting action as the world slowly emerged from lockdown numero uno. There hadn't been a Premier League game since the 9th of March. The GAA was nowhere to be seen. The Six Nations was months away from its conclusion. And then, in the middle of May, came a glimmer of light from an unexpected source - the return of the Bundesliga.

German football has never exactly been the biggest on these shores. Sure, everyone knows who Bayern Munich are and just how good they are. There was also a general level of familiarity with Borussia Dortmund, especially after their 2013 Champions League final appearance.

But beyond that, there really wasn't much of an appreciation for the Bundesliga, with the Premier League dominating the overseas football market in Ireland. When last May came around, though, everyone was suddenly a Bundesliga fan.

On May 16 2020, football made its grand return, when Borussia Dortmund hosted Schalke in the first Bundesliga game post-lockdown. And with it began the biggest German football craze these parts have ever seen.

The Dortmund-Schalke rivalry is known as the "RevierDerby" - and you'd better believe Irish football fans were suddenly experts as to why that was. There'd barely been a mention of Union Berlin outside of Germany, but all of a sudden we were analysing their first top flight season with vigour.

Fantasy Premier League was replaced with Bundesliga sweepstakes or with "last man standing" challenges where you were desperately resisting the urge to waste your one Bayern Munich pick early on.

The Bundesliga's popularity didn't wane after the first weekend, as the Premier League wouldn't return until June 17. It would be August before we had Leinster and Munster back in rugby action, and October before we had inter-county GAA. When Bayern took on Dortmund in the title decider in late May, it felt like a massive sporting occasion.

At a time when there was no other sport to watch, the return of the Bundesliga was a glimpse at the light of the tunnel. If you'd told us then that we'd still be waiting for fans to fully return to stadiums one year on, maybe our optimism would have dissipated. But it's hard to forget just how fanatical we all got about a league we'd shown very little interest in previously.

In a strange way, this shot of Erling Haaland celebrating after scoring the opening goal of the RevierDerby is a poignant snapshot of the year of 2020. The year of empty stadiums and social distancing. But, alongside all of that, there was a strange comfort in knowing that no matter how different or unnatural it looked, there was at least a welcome distraction on the telly.

And that all started last May when we all became Bundesliga fanatics for a few weeks.

We doubt half as many overseas viewers will be watching Dortmund's trip to Mainz this evening as there were watching the RevierDerby this day last year. But it's nice to look back on the month or so last year when the Bundesliga took over all of our sporting interest, and when everyone had something to say, or a favourite German team.

SEE ALSO: The Return Of Fans Was The Best Thing About A Memorable FA Cup Final 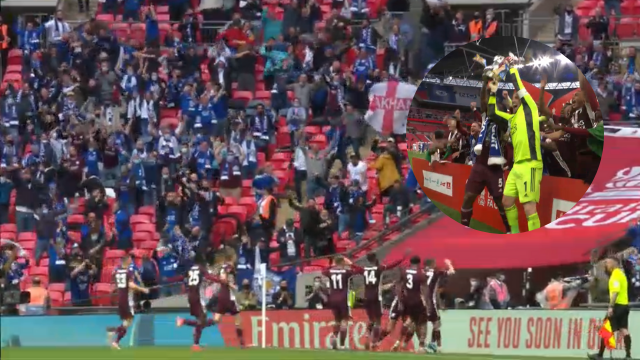 Football
2 weeks ago
By Eoin Harrington
Philippe Coutinho's Most Iconic Barcelona Moment Came When He Humiliated Them
Football
1 month ago
By Jonathan Byrne
Bellingham Not Happy With Referee After Bayern Loss
Football
1 month ago
By Jonathan Browne
Bayern Munich Vs Barcelona To Be Played Behind Closed Doors
Popular on Balls
GAA
2 days ago
By PJ Browne
Insane Drama As Late TJ Reid Goal Sends Ballyhale Into All-Ireland Final
Rugby
1 day ago
By Colman Stanley
Yesterday Was Not The First Time Wayne Barnes Sent A Player Off For Getting Lippy
Rugby
23 hours ago
By Colman Stanley
Champions Cup Predictions And Permutations For The Irish Provinces
The Rewind
2 days ago
By Jonathan Byrne
The Definitive Ranking: Deli Items Ranked From Best To Worst