While there has been a steady confidence at Old Trafford that he has been building a good side, United have not come close to challenging for the league title or in top European competition under his tutelage. That is something that has to change during this campaign.

Many have compared the Norwegian's progress at United to that of Jurgen Klopp during his early days at Liverpool. The former Dortmund manager took a number of years to turn Liverpool into Premier League and Champions League contenders after arriving at Anfield.

On tonight's Monday Night Football, they compared the stats from both Solskjaer's and Klopp's first 99 league games in charge of their respective clubs.

The stats were largely similar, with the one difference being that Solskjaer's net spend was a mammoth £350million more than his counterpart's.

📊 Klopp and Solskjaer after 99 games in the Premier League at their current clubs. pic.twitter.com/3NI04z18hM

Despite this, Gary Neville felt that United were very unlikely to go out and win the league this season unless they spent £150million to sign Harry Kane.

The former England right back was of the opinion that coming ahead of all of Manchester City, Chelsea, and Liverpool would be probably be a bridge too far for his former club without signing someone of his ilk.

🗣"I think they will still be short, why are they not going in for Harry Kane this week." @GNev2 answers whether Manchester United are one of the title favourites this season. pic.twitter.com/gLKnDQzTNr

Jamie Carragher believes that it is this very attitude that means the comparisons between Solskjaer and Klopp are useless.

He felt that the United boss needed to be compared to the exploits of City and Chelsea due to the vast sums of money they have spent in recent years. Carragher also said that the club's supporters would have no such doubts about the team's chances this season if they had a different manager in charge.

🗣"Kane coming in would be a differentiator." @GNev2 and @Carra23 debate what Manchester United must do to compete for the Premier League title this season. pic.twitter.com/leZZ409G8q

It seems whenever I listen to Gary, Roy [Keane], or Manchester United fans, the answer is always 'go and spend £100million on someone'. That is always the answer every time I am on the show: go and blitz the transfer market.

You're talking about Chelsea going and buying Lukaku, and all of a sudden on the back of yesterday and their start to the season, it's 'Chelsea are going to win the league, them or City'.

I think if Pep Guardiola, Jurgen Klopp, or maybe Thomas Tuchel had Manchester United's squad, they would feel they could win the league. I really believe that.

You're comparing Liverpool and Manchester United. Yeah it's a similar sort of trajectory and that Solskjaer has done a really good job.

Why don't you compare it to Man City and Chelsea? Liverpool didn't have the revenues to compete and go for the league right away.

There's no way Thomas Tuchel goes into Chelsea and they accept that he will have three or four years spending that type of money.

Manchester United not winning the league this year or finishing third or fourth, that can't be acceptable.

There is no doubt that United's trophy haul in recent season has been nowhere near good enough when you consider the amount of money they have spent.

As a result, the doubts about Ole Gunnar Solkjaer's ability to lead this team should come under questions. We will have a more definitive answer on this issue by the end of the season. 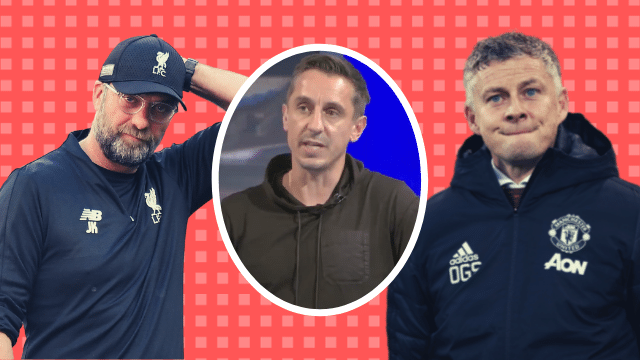 Football
6 days ago
By Gary Connaughton
Frank Lampard Reveals Ruthless Nature Of His Sacking At Chelsea
Football
2 weeks ago
By Donny Mahoney
Rio Ferdinand Explains Why He Called For Solskjaer To Be Sacked
Football
4 weeks ago
By Eoin Harrington
What Exactly Is The Role Of Football Pundits In The Social Media Age?
Previous Next