Things certainly aren't right at Celtic at the minute. While the club are in a difficult position in terms of missing players, their performances as of late have been well short of the mark.

The Aberdeen game this afternoon was the latest example. The game would finish 3-3, and while Aberdeen did rescue a point with a stoppage time penalty, Celtic can certainly have no complaints about the result.

The away side's defending was a concern throughout the 90 minutes. They conceded a penalty just before halftime, with Olivier Ntcham needlessly bringing down Lewis Ferguson in the box.

Lewis Ferguson makes no mistake from 12 yards after being brought down by Olivier Ntcham.

Callum McGregor equalised in the second half, but it was another defensive error that allowed Aberdeen to retake the lead.

This time it came from Shane Duffy, with the Ireland international failing to deal with a routine ball down the left flank.

ABERDEEN BACK IN FRONT!

Hedges follows up Cosgrove's shot and bundles it over the line!

Leigh Griffiths gave Celtic supporters a timely reminder of what he can offer to the club when he got them back on level terms.

It was a cracking finish from the Scotland striker, who had only been introduced a few minutes earlier.

Celtic have turned this game on it's head!

Ryan Christie got his side's third of the game from the penalty spot to give Celtic the lead a couple of moments later, but there would be late drama.

A very clumsy tackle from Callum McGregor resulted in a third penalty of the game, with Lewis Ferguson tucking away the spot kick.

ABERDEEN EQUALISE AT THE DEATH!

Lewis Ferguson despatches his second penalty of the day. It ends three goals a piece here at Pittodrie!

This result that Celtic have now gone three games without a win, while also potentially conceding more ground to Rangers in the title race.

Speaking after the game, Neil Lennon said he had to try and ignore the current criticisms coming from those outside the dressing.

I can't control that. You aware of it, but there's nothing I can do about that, people will have their opinions.

You just have to accept it, look at what you've achieved before and what you can achieve, carry on as strong as you can. 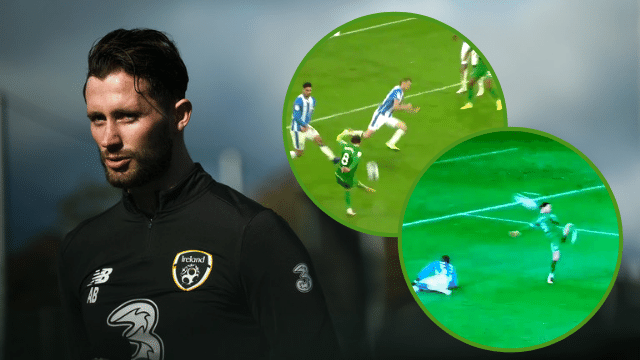 Football
1 day ago
By Emmet Bradshaw
Anthony Stokes Is On Trial With Shamrock Rovers
Football
1 week ago
By Gary Connaughton
Report: Celtic Eyeing Move For Experienced Premier League Goalkeeper
Football
2 weeks ago
By Gary Connaughton
The Unknown Ange Postecoglou Actually Has The Pedigree To Be Successful At Celtic
Popular on Balls
Football
20 hours ago
By Eoin Harrington
Sadlier And Duff Powerfully Put The Boot Into UEFA Over Rainbow Flag Stance
GAA
23 hours ago
By PJ Browne
'I Look At My Nephews - They've Bulked Up, They've Got Stronger'
Football
18 hours ago
By Donny Mahoney
Leon Goretzka With Pointed Goal Celebration Right In Front Of Hungarian Supporters
Football
18 hours ago
By Eoin Harrington
A Mad Night At The Euros Turned Into A Very Good Evening For England