After nearly 350 games in nine years, five League of Ireland titles, three FAI Cups, and three League Cups, as well as two treks through the Europa League group stage, Chris Shields will be leaving Dundalk after one final game next week.

The 30-year-old Dubliner has signed a three year deal with Linfield . His departure from Oriel Park signals the end of an era for Dundalk. He was signed by Sean McCaffrey in 2012, but Stephen Kenny took over soon after and made Shields club captain. The club would go on to enjoy a period of unprecedented success since winning the league in 2014, just two years after his arrival. Now, he bids farewell to a club in transition, and as one of the last links to the glory days of the Kenny era.

Dundalk FC can confirm that Chris Shields will leave Oriel Park at the end of June.

We would like to express our gratitude to Chris for almost 10 years of service.

A captain, leader and club legend, we wish him and his family the very best of luck. https://t.co/qyGAB7hJVF pic.twitter.com/DbaVmClZsq

While Shields has one more with the Lilywhites to go, against Derry this Friday, he tweeted out a farewell to Dundalk on Tuesday evening. It's fair to say it's among the greatest goodbyes we've ever seen, and a mark of the character of a man who's led the club through some incredible times that will never be forgotten.

A fond farewell to the pubs, and especially the take-aways of the town, as much as the players, staff and fans.

So after nine and a half years, I've called time on my Dundalk FC career. This was one of the toughest decisions of my life but one that was best for myself and my family. Since 2012 I have lived and breathed Dundalk football club and hopefully that has shown in every time I have put on the jersey.

My time has consisted of immense success and many times that will live long in the memory including league and cup wins and amazing European journeys. I was privileged to captain the club to an FAI Cup and a Europa League group stage and I will be proud of that forever.

I've fell in love with the town itself not just the club. In a town that consists of mainly pubs, take aways and coffee shops it was always going to be a match made in heaven. With that a special thanks to the Avenue Inn, brus, Courtney's, ridley's and even in a dark time, crime time Charlie's. The culinary excellence that are the take aways isn't spoke about enough. The standard is sky high and the smell of curry sauce coming from the Roma should be bottled and sold.

To all my managers Sean, Darius, Stephen, Vinny, Filippo, Shane, Jim and Vinny again I'm personally thankful for as I've learned something from each one of them. My teammates through the years have consisted of some top top players and even better people. And to them I would like to say you are welcome.

Lastly I'd like to thank the fans, you have made many a special night in oriel and beyond extra special. I'm very lucky to have so many special moments to choose from but the last minute equaliser in Alkmaar will always be stand out. Bodies and limbs everywhere. The amount of messages and well wishes are near impossible to get through, I'm truly overwhelmed. Now is a time more than ever to support the lads and management as I see the hard work everyone puts in every day. We will get back to where we belong. Dundalk may have lost a player but have gained a lifelong fan now

Ps. Don't let your kids climb all over my statue at oriel, it's a mark of respect not a fucking jungle gym

Dundalk reappointed former manager Vinny Perth earlier this month after the club have endured a tumultuous time since his sacking last year. The club currently sit in 7th place in the Premier Division, but have been in decent form of late since a surprise 2-1 victory over Shamrock Rovers in May. It is unclear whether the departure of their captain signals a cost-cutting surge between now and the end of the season.

SEE ALSO: Anthony Stokes Is On Trial With Shamrock Rovers 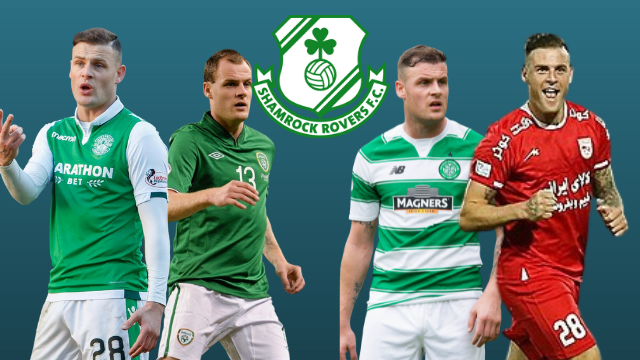