Chris Sutton Rips Todd Cantwell For Reaction To Being Subbed

Chris Sutton says he "didn't like" the way Todd Cantwell reacted to being substituted during Norwich's 2-0 defeat at home to Aston Villa.

The Norwich midfielder was replaced by Ireland international Adam Idah after 61 minutes on Tuesday evening.

"It was a big opportunity tonight, he didn’t take it and, you know, he’s hardly high-fiving Adam Idah there," former Norwich player Sutton told BT Sport.

"Going off down the tunnel, I don’t know who he thinks he is, I really don’t.

"He hasn’t performed well in a Norwich jersey for a long, long time. He’s getting above his station there. He came back out. And we all get frustrated, we’ve all been hooked off but you have to think about the team.

"That shows, maybe, there’s not a togetherness in the dressing room.”

"I didn't like the Cantwell thing... I don't know who he thinks he is!"

"He hasn't performed well in a Norwich jersey for a long time, he's getting above his station."@chris_sutton73 thinks that Todd Cantwell should have reacted better to his substitution vs. Aston Villa ? pic.twitter.com/t3F0ytXijz

23-year-old Cantwell did have a poor first half but improved in the second before he was substituted with Norwich trailing 1-0. The game was just his eighth league appearance of the season.

"I think it was really poor," said Sutton.

"He needs to kick-start his career again and the best place to do it is on the pitch. Show what you can do. In the first half, he wasn’t good enough.

“Slightly better, we saw him make runs in behind a couple of times in the second half but not good enough. I wasn’t surprised he was hooked." 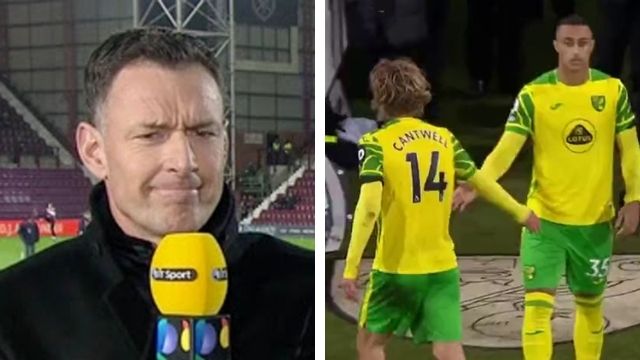