You'd be hard pressed to find someone who doesn't think Harry Kane should have been sent off for his challenge on Andy Robertson during Sunday's clash with Liverpool.

Sky's pundits were baffled that Kane did not see red, and now former Premier League referee Mark Clattenburg has added his voice to that chorus.

Speaking to BBC Radio 5 Live, Clattenburg said he could not understand the decision and claimed that referee Paul Tierney was "not doing his job" if he did not deem the tackle a sending off.

The clash between Spurs and Liverpool on Sunday was an instant Premier League classic, with end-to-end football, top quality saves and goals, and a little bit of controversy.

That last part was meant to have been eradicated by VAR but, even with the help of the video officials at Stockley Park, Sunday's referee Paul Tierney somehow saw no reason to send Spurs captain Harry Kane off for his wild tackle on Andy Robertson.

Should Harry Kane have seen red for his tackle on Andy Robertson? 🤔 pic.twitter.com/T2ik4tfxj2

Kane flew in studs up on the Liverpool full-back, and was lucky only to see yellow for the challenge. It was reported in the game's aftermath that the reasoning for Kane staying on the pitch centred on Robertson's foot lifting off the ground.

"To hear that Robertson has to have his leg planted alarms me, because if he does that he's not walking this Christmas," said Clattenberg, who served as a Premier League referee for 13 years.

If you don't believe this is a clear and obvious error about Kane, you're not doing your job correctly.

VAR cannot get this wrong. Referees can, because they have a split second. VAR have all the angles, he's got all the slow-motion, he can see the point of contact.

If they are saying that his leg has to be planted, which is a new one to me, if the leg was high, the studs were showing, it's reckless, he's lunged. For me, he's endangered the safety of the opponent.

Clattenburg is not the first to speak in bewildered tones about the refereeing in Sunday's clash. Sky pundits Jamie Carragher and Jamie Redknapp were also confused by the Harry Kane call - as well as a stonewall penalty which Liverpool were denied.

Meanwhile, Liverpool manager Jurgen Klopp was less than pleased with the refereeing, as he spoke in rather heated style to referee Tierney at the full-time whistle.

Though Kane would stay on the pitch and help Spurs to claim a 2-2 draw on Sunday, Robertson was not so lucky. Just minutes after scoring Liverpool's second, he was sent off himself for a wild kick on Spurs player Emerson Royal.

Some punters, including former Liverpool player Jim Beglin, suggested that the lenient treatment on Kane may have been down to the fact that he is captain of the English national team.

SEE ALSO: Alan Shearer Went In On Ciaran Clark On Match Of The Day Last Night 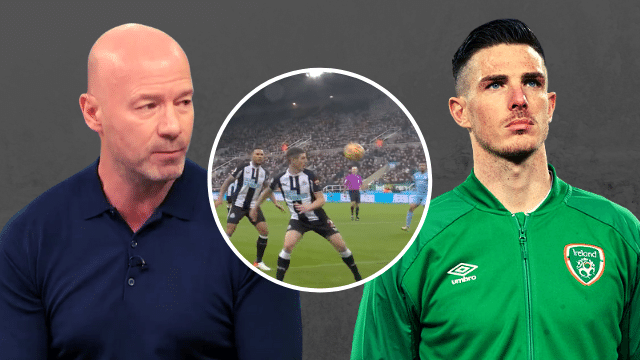