Ireland U21 and UCD forward Colm Whelan is making quite name for himself at both home and abroad.

Just minutes into his Ireland U21 debut, the in-form striker scored his first goal for Jim Crawford's side.

His goal, at the time, put the Boys in Green into a 1-0 lead before they were pegged back by Luxembourg late on in a 1-1 draw.

What a moment for @colmwhelan2000 💚🇮🇪

The @UCDAFC striker and @SSEAirtricityLg First Division top scorer nets for the U21s against 🇱🇺 just minutes after coming onto the pitch ⚽️🔥#COYBIG | #IRLU21 | #WeAreOne pic.twitter.com/ZXERB3IktT

But Whelan's rise to prominence on the international front comes as the UCD forward continues to impress on the domestic scene.

Plying his trade in the First Division, Whelan has 15 goals to his name in 19 league appearances for the Students.

And that follows on from his tally of 15 goals in the same amount of games last season as UCD missed out on promotion in agonising fashion.

Since making his move to Belfield from Waterford's U19s, Whelan has scored 36 times for UCD out of 41 games.

Hailing from Thomastown, Co. Kilkenny, Whelan began his career with Thomastown United until U16 level.

And in turn, his insistence on playing in the League of Ireland means he joins a select few who have opted against playing hurling in favour of football.

He then earned himself a move to Waterford at U17 level. While at the RSC, Whelan helped the Blues on their way to winning the U19 league title in 2019.

That was after he impressed at U17 level for the South-East side before then earning himself a move to UCD.

Since moving to UCD, the 21-year-old has caught the eye on several occasions, earning plenty of praise in the process.

Colm Whelan: The Kilkenny Man Bucking The Trend At Home And On International Stage

None more so than from his own manager Andy Myler who often heaps praise on his lethal marksman.

"From our point of view, Colm [Whelan] is a fantastic talent," Myler said in April. "He's a great kid, a lovely fella and a really good professional.

"He has all of those elements you have in a football player. I said it someone before that even if he didn't score goals he would play senior football sheerly because of his work-rate and other contributions.

Between the Stripes LOI podcast available on Apple, Spotify & all good providers.

"We've got really high hopes, and Colm can be whatever he wants to be in terms of football. He is a really grounded fella as well.

"He doesn't get carried away with doing well or badly. I am really hopeful for him for [the] future and long may it continue."

Whelan has bucked the trend somewhat in terms of the stereotypical Irish footballer.

Rather than looking to go to England at an early age, he opted to stay at home and complete his education.

A student in Grennan College in Kilkenny, the Thomastown native is now studying City Planning and Environmental Policy in UCD.

And despite his goalscoring exploits in the League of Ireland, Whelan is a remarkably grounded figure.

His priority is goals, and that is certainly showing on both the domestic and international front.

Speaking after his Ireland U21 debut, Whelan's humble self came to the fore.

"I was only buzzing to be on the pitch, let alone to score. It felt unbelievable," he said. "I couldn't believe that it went in to be honest, I didn't even see it go in to be honest.

"I was over the moon for it to do so and I just ran off celebrating."

For now at least, his focus is on his time at UCD. And that, in fact, is no surprise.

"I'll just keep working hard when I go back to UCD and hopefully I will be in the next squad."

SEE ALSO: 'I Was Already Taking My Jersey Off When It Left My Boot!' 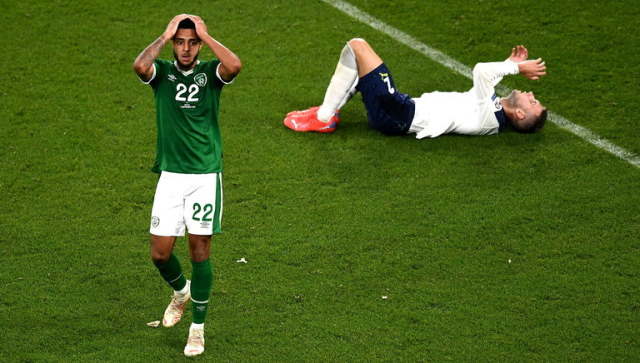 Football
11 hours ago
By Gary Connaughton
Watch: Roy Keane Pulled No Punches On Burnley After Their Relegation
28