A man in form.

Stephen Kenny has plenty of worries ahead of the upcoming international window. The likes of John Egan and Darren Randolph have already been ruled due to injury, while there are also concerns over the fitness of players including Aaron Connolly, Adam Idah, and Caoimhín Kelleher.

However, one thing he won't be concerned about is the form of Conor Hourihane.

Having spent the first half of the season sitting on the Aston Villa bench, he opted for a move to Swansea in January in order to get some first team football.

His form since has been sensational. Heading into today's game against Luton Town, the Cork man had scored four goals and registered one assist in ten Championship appearances. Certainly not a bad record for a midfielder.

Hourihane wouldn't take long to get back amongst the goals this afternoon, finding the back of the net inside three minutes after a perfectly timed run into the opposition penalty area. Keep an eye out for the pass from Ryan Manning to start off the move.

Swansea take an early lead at an extremely wet and windy Kenilworth Road!

Republic of Ireland assistant manager Keith Andrews was certainly pleased with his contribution in the commentary booth.

Hourihane would be replaced in the 65th minute as Luton Town piled on the pressure, but Swansea would manage to hold onto the lead as they moved into second place in the Championship table.

They look likely to be promoted based on current form, holding a three-point advantage over Watford in third place. Ryan Manning also put in a very strong performance and certainly put his hand up for selection for the upcoming squad.

Hourihane's form will be hugely encouraging to Stephen Kenny ahead of a couple of key World Cup qualifiers later this month. What's more, he is also doing it in a role that is has been a big issue for Ireland in recent times.

The 29-year old has mainly acted as a deep-lying midfielder at international level, something that hasn't always suited him. He can struggle when asked to deal with runners from the opposition midfield at times.

At Swansea City, Hourihane has played further up the pitch with obvious positive results. This freedom allows him to get into the box far more frequently, with timing those type of runs one of the strongest aspects of his game. Today's goal was the perfect example.

It was notable how often the likes of Adam Idah or David McGoldrick found themselves isolated in forward areas in recent international games, with too large of a gap between the forwards and midfielders in transition. This could be one potential solution.

Ireland may not be able to deploy him in such a role in every game, but the option to do so should certainly make them a bigger goal threat. After all, the side have only scored one goal during the Kenny era.

Hourihane certainly has the ability to help them end that barren run. 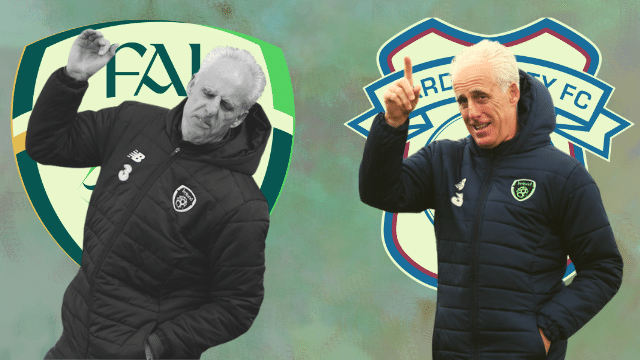