We're living through strange times. And while it's sometimes easy to despair at the buffoons leading countries in the English-speaking world, there have been plenty of times since the death of the George Floyd that have proven ordinary (and extraordinary) people can actually change the world.

Take Marcus Rashford. Over the past few weeks, the 22-year-old has engaged directly with British politicians to campaign on an issue of conscience - free meals for poor children - and today, the Tories caved in. The public good won out.

Footballers were such an obvious target during the start of the Covid-19 crisis, with many conservatives calling on them to take voluntary pay cuts. Rashford's intervention in the issue proves what athletes can do when they engage directly on important issues.

Unsurprisingly Rashford has been the toast of social media today.

A hero. An inspiration. One of our own.

We are so proud of you, @MarcusRashford ❤️ pic.twitter.com/haAb0m2I4u

Well done @MarcusRashford making a difference of the pitch with providing free schoolmeals and the government backing you also! Good luck with the restart on the pitch this weekend with @ManUtd.

And the inevitable Katie Hopkins tweet merely proved Rashford was on the right side of history.

England and Northampton rugby player Courtney Lawes also congratulated Rashford. Though, he also included a suggestion - that child poverty could be prevented by people being married and financially secure before having children - which has understandably raised plenty of ire. Lawes subsequently deleted the tweet. 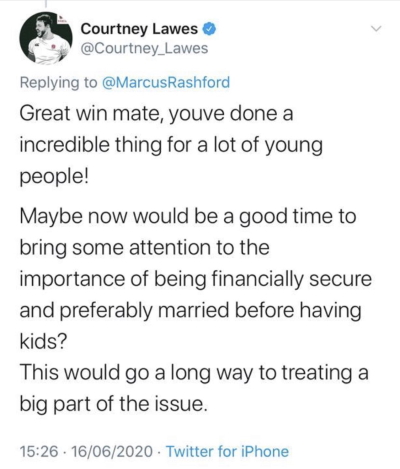 The links between sports and social change should not be overlooked. How many followed Colin Kaepernick by taking a knee over the past month? A Manchester United striker has changed Tory policy this afternoon. Long may it last.

See Also: 'Roy Keane Cut One Of The Other Lads In Two, He Thought It Was Him'

Rugby
2 months ago
By Jonathan Byrne
Marcus Rashford And Maro Itoje React To UK Minister Mixing Them Up
The Rewind
4 months ago
By Eoin Harrington
Jason Sudeikis Powerfully Explains Why He Wore 'Jadon, Marcus, Bukayo' T-Shirt
Football
4 months ago
By Michael McCarthy
Marcus Rashford Shouldn't Have To Be A Good Guy To Expect Not To Be Racially Abused
Popular on Balls
Football
1 day ago
By Gary Connaughton
Hargreaves Thinks United Are Overlooking The Obvious Candidate For Next Manager
Football
1 day ago
By Gary Connaughton
Roy Keane Once Tipped Off Ronan O'Gara About Oncoming All Blacks Onslaught
Football
12 hours ago
By Gary Connaughton
Frank Lampard Has Weighed In On That Old Gerrard & Scholes Debate
Football
14 hours ago
By Eoin Harrington
Just Who Is Ralf Rangnick And Why Did Manchester United Want Him?