Irish-Portuguese Phenom Cristiano Fitzgerald Has 'Ireland In His Heart'

But the Boavista man is not alone in being part of a proudly diverse representation for the national side, both at senior and underage level.

Cristiano qualifies through Limerick father Jimmy Fitzgerald, who emigrated to Singapore in the late 1990s. It was there he met his wife, Joyce, a French national.

Speaking to Portuguese outlet Mais Futbol (h/t Emerald Exiles on Twitter), Cristiano spoke about how his father came across his namesake in 2003, and how it stuck with him.

Jimmy was sat in front of the TV in Singapore, watching Manchester United's 2003/2004 season opener against Bolton Wanderers.

While the 4-0 score line didn't suggest a game that would go down in much memory, the debut of an unknown Portuguese commodity sparked Jimmy's interest.

"My father had never heard of him, but he heard the name and called my mother," Cristiano explained. "'What do you think of the name Cristiano?'."

Cristiano Ronaldo makes his debut for Manchester United vs Bolton Wanderers, coming on in the 60th minute.

His mother shared a mutual admiration for the name, and three months later Cristiano Michael Fitzgerald was welcomed into the world.

"What's funny is that they had no idea Cristiano Ronaldo would become so famous. He was just a Portuguese kid making his debut for United. My parents chose well."

While 'that Ronaldo fella' has gone on to win Champions Leagues, Ballon D'Ors, European Championships and the likes, Fitzgerald's youth career isn't a million miles off CR7's.

Cristiano Fitzgerald is currently playing his club football in Portugal at Boavista. His family moved to Porto in 2017 from Singapore.

He turns 18 on Wednesday and will be watching his U19 teammates take part in the UEFA Championship qualifiers against Montenegro and Bosnia-Herzegovina.

He plays for Portuguese side Boavista

What a name 🇮🇪🙌🏻 pic.twitter.com/f3xjZY6vFg

Fitzgerald explained how he had to move on from playing club football in Singapore to go further with his career, and Europe was his first choice.

"My family started to realise that for me to achieve my dreams, and to be a professional footballer, I would have to move to Europe," he said.

"We chose Porto because we had been on vacation in the city and we were delighted. We loved the place and the people. It's the perfect place to live."

Now in his fourth season at Boavista, Cristiano Fitzgerald spent time playing with their Under 17s but is now a feature for the Under 19s team.

Since he's moved to the Mediterranean country, Fitzgerald says he speaks a little Portuguese. It won't stop his hopes of progressing through the Boavista ranks.

"I'm at an incredible club, the stadium is beautiful and the fans are passionate. Good thing my parents chose Porto," he said.

"Here I have the beach most of the year, the weather is great. In Ireland and Singapore it is not like that."

Cristiano told Mais Futebol his routine is simple. A morning spent in school allows him to be on the training pitch by lunchtime.

He does gym work and video analysis after ball training, before returning home to his family where he lives with his two brothers.

He says his siblings are also keen footballers, with brother Julian playing for Boavista U15s and other brother Dean U17s for Leça in the city.

Why represent Ireland? Despite residency rules leaving him eligible to play for France, Singapore or Portugal, he said his heart lies with his father's country.

"I have Ireland in my heart. My father is from there, he was a good player of hurling, a traditional Gaelic sport, and every summer I go to my grandparents' farm in Limerick, where I'm with my cousins."

Fitzgerald is looking forward to one day being able to represent the Republic of Ireland on the biggest stage of them all.

"The atmosphere (at the Aviva) is fabulous. The goal of all Irish footballers is to one day be able to play at Dublin's Aviva Stadium. "

Fitzgerald says his two favourite players, Callum Robinson and Gavin Bazunu, will cause Portugal problems on Thursday. But has he met the visitors' biggest star yet?

"I never spoke to (Cristiano Ronaldo) but I have a shirt signed by him. My father got it through a friend. It says: 'From Cristiano to Cristiano, I wish you all the best'."

"I'm extreme, I use the right foot and I love it. Of course, I dream of being like him one day. I was only sad when he scored two goals against my Ireland, even though the game was over."

See Also: 'A Massive Honour': Will Keane Proud To Reconnect With Irish Roots 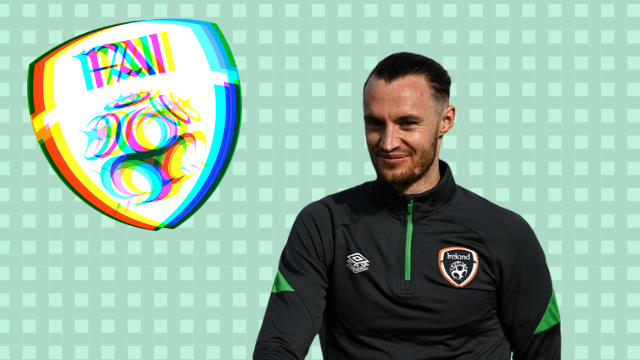 Football
4 years ago
By PJ Browne
Flag Waving Fan Causes VAR Chaos In Portugal
Popular on Balls
Football
4 hours ago
By Eoin Harrington
Juan Mata Questions Manchester United Management After Dire Season
Golf
2 days ago
By Gary Connaughton
Padraig Harrington Glad He Didn't Have To 'Make A Decision' On Saudi Golf League
Football
1 day ago
By Gary Connaughton
The Frank Lampard Love-In After Everton's Survival Was Downright Bizarre
GAA
2 days ago
By PJ Browne
'It Came At An Awkward Time. I Didn't Think It Would Be So Bad'