After a slightly calamitous, and at times hilarious, rain-soaked trophy presentation placed a bow on arguably the most entertaining World Cup in recent memory, few could argue that France were not worthy winners. Once the sporting aspect of the competition was out of the way, Instagram compiled some engagement figures to tell us all who the real winners of Russia 2018 were.

No prizes for guessing that despite a 2nd round exit, and a slightly flat on-field performance (first game hat-trick against Spain aside) Cristiano Ronaldo topped the social media charts by picking up a cool 5.8 million new followers during the tournament, bringing his total to over 135 million.

This was the largest increase in 'follower growth' for any player in the tournament, with Neymar following in second with an increase of 5.1 million. The Brazil striker will be delighted to learn that his on-field histrionics have at least boosted his online pulling power, if not delivered him a World Cup winners medal and a place among the greats in Brazilian football history.

The PSG star also managed to score a huge victory over club teammate and rumoured rival Kylian Mbappé, who was only sixth on the Instagram charts. The 19 year old France star will need to up his game in time for Qatar 2022 and stop focusing on things like winning the World Cup, scoring in the final and being named young player of the tournament if he has any chance of surpassing the mighty Neymar Jr. and challenging CR7 for the coveted top spot.

The rest of the top 10 has a strong South American make-up, with Philippe Coutinho & Leo Messi in third & fourth respectively. They along with Mbappé are followed by Marcelo, Gabriel Jesus, James Rodriguez, Paul Pogba and curiously Pablo Dybala, who barely kicked a ball in Russia.

Surprisingly there was no place in the top 10 for the social media savvy Antoine Griezmann. Having been a key part of the winning French team, he sacrificed celebrating with his teammates to instead cry directly in front of the cameras after both the semi-final and final, yet was unable to break into the top spots. 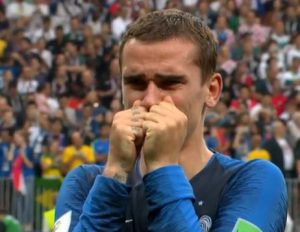 Other notable absentees from the list include Dejan Lovren, who's Instagram following fails to reflect his self-confirmed status as one of the best defenders in the world. Thoughts should also be spared for Iranian throw-in taker Milad Mohammadi and 'kicking ball off post into own face's Michy Batshuayi, both of whom can count themselves very unlucky.

I dont know but I deserve the Golden Post 😘😘 https://t.co/FJvhcV6Vzp

Finally found the perfect depiction of how my PhD is going! 😂 #Batshuayi #WorldCup #Belgium #PhDlife pic.twitter.com/pLUDTwyfl8

This hability is absolutly necesary for #PES2019