Museum hoped to provide boost to island of Madeira 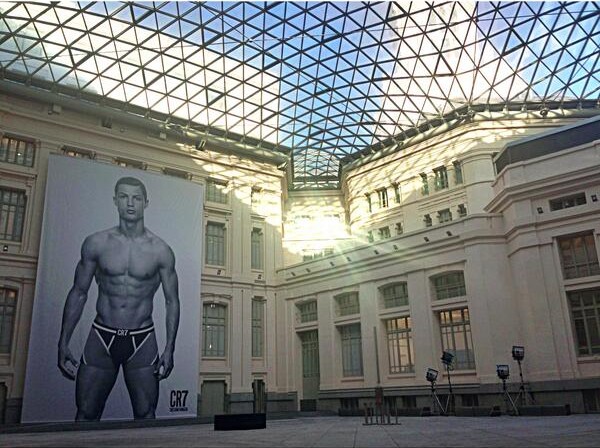 Photo from the launch of Cristiano Ronaldo underwear line (Twitter)

Cristiano Ronaldo has announced that he is opening a museum dedicated to all things Cristiano Ronaldo. The museum will be located in Funchal, the capital of the Portuguese island of Madeira, where the Real Madrid superstar grew up.

From the AFP, via Yahoo:

The 28-year-old Real Madrid player will use the museum to showcase memorabilia from his hugely successful career, which began in the 1990s on the island of Madeira.

Ronaldo said he would be there in person on December 15 for the opening of the museum in Madeira's capital Funchal, which will showcase memorabilia including footballs, photographs and trophies.

It is unclear whether that memorabilia will include his Balon D'Or runner-up trophies or whether they've been hidden away in disgust at only being considered second best.

The museum is hoped to provide a boost to Madeira tourism and it appears to be a matter of time before the whole island is rebranded as Ronaldo-land.

"The museum is a dream for Cristiano. He wants to give something back to Madeira and he came up with the idea along with his mother. It's a family project.

"He also wants to invest in other ventures in future on the island. This museum is just the start."

Football
8 months ago
By Michael McCarthy
How Did The Big Names Vote At The FIFA Best Awards?
2

Football
5 months ago
By Balls Team
Watch: Cristiano Ronaldo Scores Winning Header After Extraordinary Leap
Football
8 months ago
By Michael McCarthy
How Did The Big Names Vote At The FIFA Best Awards?
Football
1 year ago
By Aonghus Ó Maicín
Watch: Son Of Cristiano Ronaldo Scores Seven Goals Before Half-time
Popular on Balls
Gaming
22 hours ago
By Gary Connaughton
The Euro 2020 Video Game Is Now Available To Download For Free
9

Football
21 hours ago
By Gary Connaughton
Who Knew That Ireland Were Twice Crowned World Football Champions?
38

The Rewind
22 hours ago
By Gary Connaughton
Quiz: How Well Do You Know Rachel Green?