During Damien Duff's time at Chelsea, weekly nights on the town were still a regular occurrence for players.

The Dubliner wanted to join an English clique of players on nights out but didn't as they referred to themselves as 'The Bulldogs'.

"Even when we were playing 60 or 70 games a season, we were out together on the town and pissed," Duff told Si Ferry's Open Goal podcast.

That's half the battle as well. It builds a good bond between everyone.

The English lads, I never wanted to be part of them. They always called themselves 'The Bulldogs'; it would have been Bridgy, Lamps, JT, a couple of the English physios. Eidur [Gudjohnsen] was involved in it. Becasue of the Irish thing, [I thought] 'I want to be part of your group but you're not calling me a bulldog'.

We'd be out all the time. A few of the foreign boys would flip in and flip out. They'd go out, not drink and feel good the next day whereas the British, Irish and Icelandic lads would go out and get absolutely lamped. This was every week. It was the norm.

Prior to joining Chelsea, Duff had discussions with both Manchester United and Liverpool about moves. He even met Alex Ferguson at the house of Man Utd kitman Albert Morgan.

"It nearly happened with both," said Duff.

"Chelsea was never on my radar. Ideally, it would have been Man U, Liverpool, great clubs with Irish connections.

"I met Alex Ferguson and spoke to him. When you spend time with him and talk to him about football, you want to play for him. I think I just cost too much and they got better wingers than me in the end.

"I met him in the kitman's house. I think Fergie did all his business in Albert's house. Albert picked me up at the airport and brought me there.

"I didn't say a word for two or three hours. I was still a baby, 21 or 22. I just stared at him. I was probably dribbling as well. Ma made me wear a shirt and tie, as Irish mothers do. I was suited and booted. I looked like a dick, probably. That's probably why he didn't sign me. I was just dribbling looking at him."

When Duff got the call from Chelsea, he took it while lying in bed with a hangover.

"Most footballers in the four to six weeks over the summer, they'd always be dying of a hangover. Initially, when I got the message, I was dying of a hangover. Me with my heebie-jeebies, I don't think I returned the call for two or three days. I just needed to sharpen up.

"I hummed and hawed over the move for a couple of weeks. I flew down to London, two or three times. I met Claudio Ranieri once. I remember him saying that I'd play 99 per cent of the games. That always stuck out with me. I was always thinking about the one per cent. I wanted to play the one per cent as well."

Duff covered his entire career in a podcast stretching to nearly two hours. (It is well-worth a listen.) There are a few other stories of note.

Damien Duff on helicopter rides to Dublin with Michael Owen

"Mo's a good guy. He was amazing before his real injury problems. I just think that when he was at Newcastle with me, his body couldn't take the load of being a footballer.

"It was aimed at him a lot: If you play somewhere, you should live there. He was down in Wales an awful lot with the chopper.

"I benefited a few times. He'd head down to Wales and I'd jump in with him. He'd head across the water and drop me in my Ma and Da's back garden. You'd be 12pm finished training in Newcastle and having a cup of tea with my Ma two hours later."

"I was a devil for always doing extra [training] throughout my career. I wish I didn't work as hard. That might sound strange but it's probably why I walk with a limp now.

"I was just about to go in for a knee operation and we were playing Man Utd a month later. Jose Mourinho goes 'Take your time, whatever, no problem, but be fit for Man Utd'.

"I got myself back in a record 18 days from a knee cartilage operation. For the next 12 days I was just battering it, pitch runs, everything.

"Two or three days before the game, just cool as hell - I'm a straight guy but you'd near-on fancy him - he comes up to me, 'Duffer, too much water kills the flower'. I walked off the pitch. I always reference Jose's line."

Damien Duff on sprinting to a Europa League game

"I still hadn't got used to London traffic and Fulham were playing Shakhtar Donetsk. I was going to be 20 minutes late for the meeting at 6:30pm for an 8pm kick-off. I was like, 'You're a clown. I was absolutely rattled'. I just pulled in on the A4, this little slip road and dumped my car.

"I was two-and-a-half to three kilometres from the ground and had 12 to 15 minutes to get there. I had to sprint.

"Shakhtar Donetsk had Willian, Eduardo, Fernandinho. They were bopping. I didn't even need to do a warm-up. I came into the meeting sweating, panting.

"I was a bit leggy in the game. I didn't jump out of my slot a lot. We didn't have the ball a lot that night. Roy [Hodgson] would keep you organised. It suited me that we were playing them. We didn't have to do anything proactive. I was just shuffling all night."

See Also: Footballers You (Probably) Didn't Know Were Related To Each Other 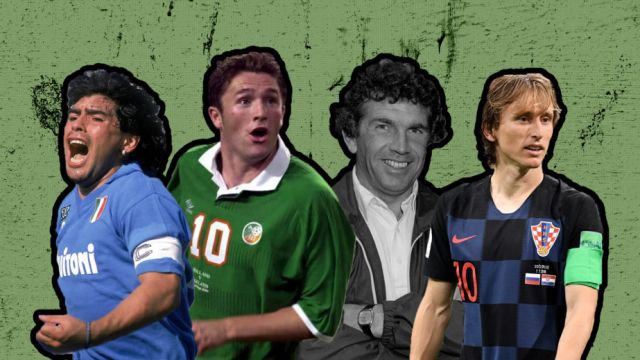 Football
3 days ago
By Colman Stanley
Deja Vu For Chelsea As Liverpool Win The FA Cup On Penalties
Football
5 days ago
By Luke Delaney
How To Watch The FA Cup Final: TV Info, Kickoff Time, Team News
Football
1 week ago
By Eoin Harrington
Referee Ovrebo Admits Chelsea Should Have Had A Penalty In 2009 Semi-Final
Popular on Balls
GAA
2 days ago
By PJ Browne
Cusack Has Little Sympathy For Gearoid Hegarty After Red Card
Football
7 hours ago
By PJ Browne
Man Arrested For Headbutting Billy Sharp After Playoff Semi-Final
GAA
1 day ago
By PJ Browne
GAA President Explains Why Tailteann Cup Won't Be All-Ireland Curtain Raiser
Football
3 days ago
By Eoin Harrington
Alan Shearer Says Roy Keane "Ran Away" From Him After Famous Clash