'The Stuff That Was Done To Us, You'd Get The Sack Or Go To Jail Now'

Looking back now, Damien Duff feels people would be behind bars if the type of treatment which he received at Blackburn in the mid-90s was replicated today.

Duff joined the club as a 16-year-old, making his Premier League debut at the end of the 1996/97 season.

"When I think back to the stuff that was done to us, you'd get the sack or go to jail now.

"The first week I was there, the young Irish boy I went over with, it was his birthday and he was thrown in the back of a car blindfolded with his underpants and a pair of runners on.

"I was made to get in the car with him, I guess to look at it. He was dropped about three or four kilometres away up on the hill; blindfold off and make your own way home.

"If you didn't do your jobs right, you'd be stripped naked and made run around the training ground.

"I wouldn't change it, it's character building, I'd call it. You know, fuck it, if you did it now, you'd go to jail [for] some of the stuff that happened to us.

"When I got into the first team squad, they were horrible to me but in a nice way, they knew what they were doing. I still had to do my jobs then. The likes of Sutty (Chris Sutton) would muller me all the time.

"I was on first team dressing room duty; instead of going for a shit in the toilet, he'd just leave a shit in a bag in the middle of the floor. I'd be picking up his shit in plastic bags.

"I cleaned Tim Sherwood's boots. I'd be lining out with him on a Saturday but during the week, I was scrubbing his boots. Every morning I'd hear his Cockney accent, 'Duffer, you cunt' because I didn't do a good job, I guess. One night I left them in the sauna which didn't go down too well with him.

"It was character building but some of the stuff, you wouldn't get away with now." 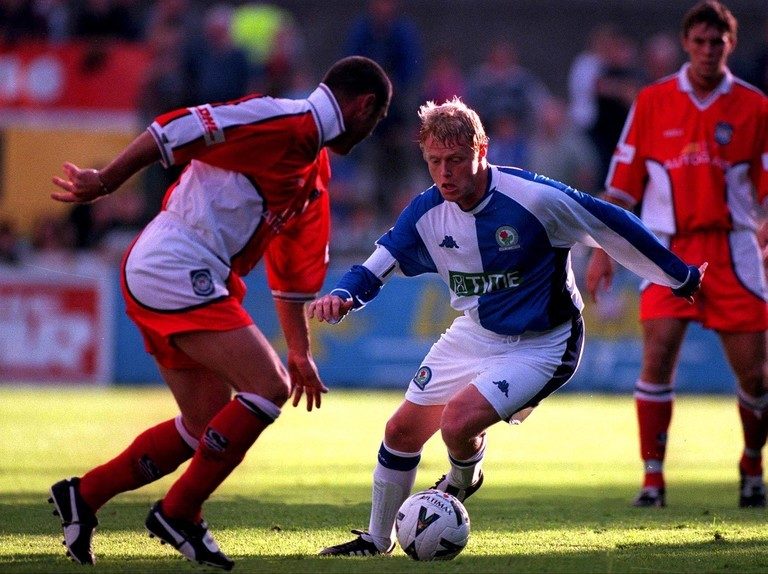 When Duff left Dublin for Blackburn, his mother - tears in her eyes - told him he could come back whenever he wanted. Duff told her not to worry, that he wouldn't be back.

Blackburn's academy players lived on site at the training ground in what was an old hospital.

"We lived up in the hills in Blackburn," said Duff.

"It was two haunted houses up on a hill overlooking the pitches. You'd leave the training ground once a week to go to college on a Wednesday. The only other time you'd leave was if there was an away game. That was once every fortnight.

"You were well drilled to not answer people back. There were first year and second year apprentices. If a first year even answered a second year back, you were going to court. There were 20 or 30 people in the room and you were up guilty or innocent. You were more often than not found guilty just for answering someone back, even politely.

"You could find yourself in an ice bath with cups of piss thrown on you. Did I answer people back? Absolutely not. I went under the radar for two or three years."