Damien Duff has been on top form during Euro 2020. His analysis and player knowledge has been top class at times, but his one liners have arguably been even better.

He was at it again before the England-Scotland game this evening.

While Duff would begrudgingly admit that he was happy to see England do well at Euro 96, that was the last time he has cheered them on.

When asked for his prediction ahead of the game, he said he was desperate for a Scotland win. He also found time to throw a dig at two members of the English squad, saying it was difficult to choose who to support because of the Irish representation on both sides.

"A great friend of mine, an absolutely brilliant coach"

I'm going to go with who I want to one and not who I think will win.

I have to say, it's a difficult one with three Irish men involved tonight, obviously off the English team there's Declan Rice and Jack Grealish, and we have Steven Reid in the Scotland set-up.

He's a a brilliant coach and I love him to bits.

Reid, who played alongside Duff a number of times at international level, is currently a member of the Scotland backroom team under Steve Clarke.

It's fair to say Duff was letting his heart rule his head when it came to making his prediction.

Damien Duff: “Steven Reid is a Scotland coach, love him to bits, so I’ll go for Scotland.”

Damien Duff really doesn’t give a shite does he?! #ENGSCO #EURO2020

Damien Duff is becoming a legend pundit. 3 Irish men involved in tonight’s games, Rice and Grealish for England and Reid as coach for Scotland. 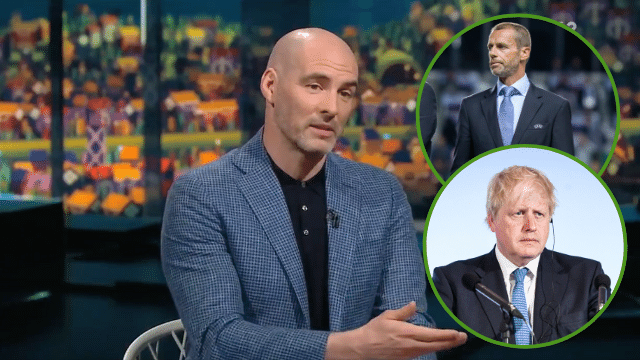