It was a serious night to forget for Liverpool fans on Tuesday night, as they went down to a limp 3-1 defeat to Real Madrid in their Champions League quarter-final first leg. Damien Duff and Richie Sadlier were on punditry duty for RTÉ for the game, and they did not mince their words when discussing the Liverpool performance.

There was a lack of energy from Liverpool from the beginning of the game, and Trent Alexander-Arnold and Alisson Becker both made poor mistakes for players of their quality. Sadio Mané and Andrew Robertson - both world-class players - were also anonymous on a poor night for Liverpool, who now look unlikely to be playing Champions League football next season.

Former Chelsea and Ireland winger Duff was asked whether a 3-1 defeat might even be seen as a good result for Liverpool, given the fact they will take an away goal back to Anfield despite such a poor performance.

Considering how bad Liverpool were, yes. They were awful. It’s the worst I’ve seen them all season, and it’s been a bad season. Would I give them a chance? Yes I would, if they were going back to a full Anfield and they were playing at their full-tilt like what they did to Barcelona a few years ago. But going off tonight, you’d say no way, it’s tie over.

I’m very black and white with football, you’ve a good chance of winning a match when you bring quality, energy, desire, emotion even – they lacked four of them things tonight. Granted, it’s at a training ground it doesn’t even feel like a quarter-final looking at it, Real Madrid albeit the better team.

But it’s like Liverpool showed up for a training match on a Monday morning. Few lads hangovers, few lads ate too much breakfast, few lads didn’t do their pre-activation, didn’t get their massage. They were horrific. Like, so, so bad. I don’t know how they come back from that.

Duff had talked up Liverpool's chances in the buildup to the game, but he was clearly taken aback by the lack of quality from a team that has won both the Champions League and the Premier League in recent seasons.

His fellow pundit Sadlier was just as cutting, suggesting this was the lowest point of what has been a very poor season for the defending Premier League champions.

You can’t all of a sudden recreate form, or recreate your work level, or recreate all of the qualities that you just mentioned that aren’t there, just because it’s a change of competition. This team has been – I’ll say “underperforming”, compared to the standards they set in the last two or three seasons.

On the one hand, you say it’s unfair to criticise them for not being able to sustain clearly unsustainably high levels of performance, but they’ve looked shocked to bits in some games this season. In the first-half, that was the lowest I think that they’ve reached – and bare in mind, this is a team that got battered by Aston Villa that day. Tonight, they were terrible.

Trent Alexander-Arnold's form has been under scrutiny and was again at the forefront of the post-match discussions after his mistake in the first half led to Real's second goal. He was the target of more criticism from Duff, who suggested that he agreed with Gary Neville's assertion on Monday Night Football that Gareth Southgate will not pick him for England's Euro 2021 squad.

You know, you hear so much the last couple of weeks – listen, I hate hammering young lads. Phillips, is he going to have a Liverpool career? Possibly not. But… “Arnold has to go to a World Cup, he has to go” – does he have to go? He doesn’t defend, he absolutely doesn’t defend, you could argue he’s given away two or three goals tonight.

He’s unbelievable on the ball, the most technical player you’ll see around, but defending wise…he seems like the last thing on his mind is 'I have to defend the ball'.

The overarching theme of the conversation, though, was that Liverpool simply weren't good enough and that their performance was unbelievable given the heights of their achievements over the last two seasons.

Next Wednesday's second-leg is one of the most high-stakes game Liverpool have played in recent years, though it still seems quite incredible that their season has fallen apart as much as it has. If Duff and Sadlier are to be believed, things could get worse before they get better. 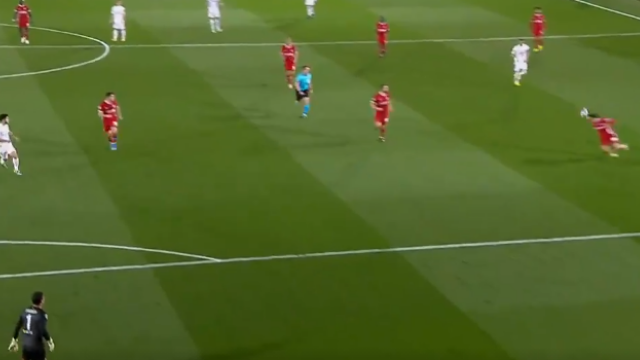