Stephen Kenny Wants To Do Things His Way, And Damien Duff Is A Big Part Of That

After it was announced that Stephen Kenny would take over as Ireland manager with immediate effect late last week, one of the first questions that emerged was what would with Robbie Keane.

Ireland's all-time top goalscorer had been part of the backroom staff under Mick McCarthy, juggling this with his role as assistant manager with Middlesbrough. What's more, the FAI had tied him down to a four-year contract, a rather odd decision when it was known that a change of management was on the horizon.

Many expected that Kenny would find a role somewhere for Keane, but when his backroom team was confirmed, he wasn't present.

Questions remained as to the reason why, but those were answered this afternoon. Speaking to the press for the first time as Ireland manager, Kenny confirmed that it was simply down to the fact that he wanted to bring in his own backroom team.

To be honest, I have the height of respect for Robbie Keane, what he has achieved in his career is incredible. We don’t know each other that well, any time we have had conversations with each other we’ve got on fine, we’ve got on very well.

As the manager you must have the right to pick your own backroom team, and it’s important there isn’t blurred lines in the roles, clearly defined roles are important.

That’s what I’ve learned from my own personal experience. Keith Andrews has been my assistant for the last year and a half and we have developed a strong relationship and a good rapport and way of working together.

Damien Duff has come in and I’ve obviously watched Damien’s coaching career, but at Celtic he has played a pivotal role in terms of a potential treble for them. He is quite a creative and inventive training ground coach with great preparation, and attention to detail and high work ethic.

That’s about selecting my own team, who will complement each other.

The addition of Andrews was an expected one, with the former Blackburn midfielder having acted as assistant manager to Kenny during his time with the U21s. The news that Damien Duff was also on the coaching ticket was more surprising.

Duff has been blazing a somewhat unique trail in coaching in recent years. While other big name players have stepped straight into big management jobs after hanging up their boots, he took the rather modest position as a coach with the Shamrock Rovers U15s.

A role with the Ireland underage team at the same grade would follow, before the opportunity to coach the Celtic reserve side popped up. He went to Glasgow, and when Neil Lennon returned to the club, he made Duff part of his first team coaching staff.

Those who have worked with the Dubliner rate him highly. Stephen Kenny has seen his coaching ability firsthand. He was observing the Pro Licence course that Duff was part of, where he was selected as the pick of the bunch by his peers: 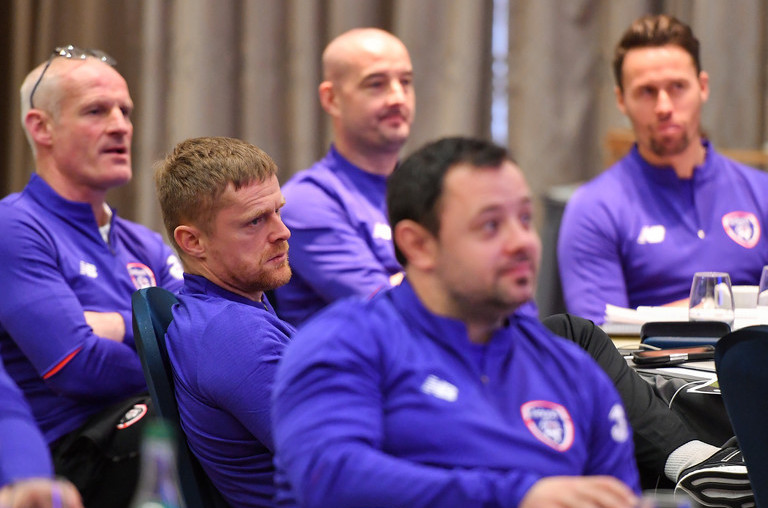 Damien done his Pro Licence initially. He started at the bottom by going in with the U15s at Shamrock Rovers, and the U15 international team as well, so he worked very hard for a long time.

He obviously did his pro licence this year with the FAI. Niall O’Regan, the head of coach education, asked me to come in at times and observe.

Damien was selected by the group to go to Switzerland to put on a session for all the other people who were doing Pro Licences in Europe, from all the pro licence groups in different countries.

He was the one selected from the Irish group to put on that session for everyone. He was brilliant.

The thing about Keith and Damien, with technology changing so rapidly so has the job, they’re two modern-thinking coaches who both worked at club football and in the international setup.

That year at Celtic will be of huge benefit to him, because they’ve had good results in Europe this year. He’s had to adapt tactically to all of those games. I feel he will be a very good addition.

As suggested in his decision to leave Robbie Keane out of his backroom team, Stephen Kenny will want to do things his way as Ireland manager.

He said that while playing time at club level is important, it will not be the deciding factor on who makes the team. After all, not all situations are equal at that level. Should Troy Parrott be punished for being one the books at one of Europe's top clubs?

That is just one example. Context is important, something not always accounted for by previous managers. Ultimately, Kenny said he cannot let the decisions of other managers at club level dictate the way he picks his team:

Well I think it's important that you don't let other people dictate your team as well, and sometimes they do by putting...

Just because somebody gets an opportunity  and another player doesn't, does that mean he should be rated above the player who didn't get an opportunity?

I don't want to manage the Irish team based on a table, a mathematical table based on who's got the number of appearances for a certain club and then therefore they should be in the team rather than someone who has less appearances for a different club. So I don't want to manage like that. I want to have a clear vision of what I want and what players fit into what I want.

Football
1 week ago
By PJ Browne
'Brighton Have Been Fantastic. Graham Potter Is A Brilliant Football Man'
Previous Next

Football
6 days ago
By Donny Mahoney
The Depressing Stat That Captures The Extent Of Ireland's Goalscoring Woes
Football
6 days ago
By Balls Team
'It's Hard To Believe That We Didn't Score'
Football
1 week ago
By PJ Browne
'Brighton Have Been Fantastic. Graham Potter Is A Brilliant Football Man'
Popular on Balls
GAA
36 minutes ago
By PJ Browne
Cork Senior Football Final Postponed Until At Least Early March
1