Poland were disappointing in their 2-1 loss to Slovakia at EURO 2020 today, but there was one incident which caught the eye of Damien Duff in the RTÉ studio.

Poland's Gregorz Krychowiak saw red in the second half after a very harsh second yellow, and Duff suggested that the VAR rules should be removed in the aftermath of the game.

Krychowiak was booked in the first-half for stopping a Slovakian counter-attack with a jersey pull - though the contact was minimal. It was the second yellow that drew the ire of pundits, as a collision after a mistimed challenge drew a booking from the referee.

The incident killed the momentum Poland had built at the start of the second-half, and the decision was a very soft one.

Damien Duff was part of RTÉ's panel for the game, and the former Chelsea and Newcastle winger said that VAR's role should be expanded to allow officials to take another look at sendings off for second yellows.

I thought it was massive. Obviously they started like a house on fire in the second half, Poland.

They probed for ten, fifteen minutes and I think it's sixteen, seventeen minutes later the sending off happens. I think it absolutely kills the game for Poland, it's difficult at any level playing with ten men.

That's where my issues with referees and VAR...VAR can get involved in goals, penos, mistaken identity, and direct reds.

But, for me, they should be allowed get involved in indirect reds - as in, when there's a second yellow. Because it's absolutely nonsense that he was sent off for that.

No issues with guys that play tennis or things like that - because that ref has clearly played tennis and never played football.

That's where people who play football understand. That is never a yellow card in anybody's life. Just a little body check...the first one, definitely...it's gone to a red.

That's where VAR for me - and the ref's decision with his naked eye - has to be so much better. It's influenced the way the game has gone. Three points at stake, European Championships, it's ridiculous.

It's hard to argue with Duff on this one. Though Poland offered little attacking threat to the game, the red card undeniably hurt their chances of winning and, in reality, it shouldn't have been a sending off.

As Kevin Doyle pointed out in the RTÉ studio, this is (thankfully) the first VAR controversy of the Euros, but it raises serious questions about whether the role of video technology should be expanded.

The refereeing will certainly be something to keep an eye on for the rest of the tournament. 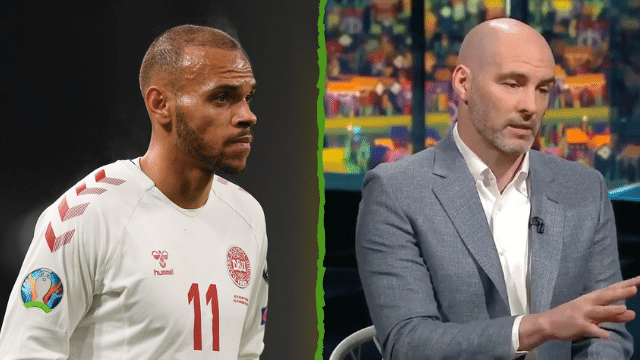