Every single club in Europe's top leagues needs to be on the lookout for their players being snapped up by Chinese sides, this is a fact we are being forced to come to terms with in 2016.

We've seen some high-profile players like Gervinho, Ramires, Ezequiel Lavezzi, and Jackson Martinez make the move to the lucrative world of Chinese football, and it looks as though it's only going to get bigger and bigger as truly staggering amounts of cash are being offered, for example the 'set-for-life' contract offered to Odion Ighalo before he had even kicked a ball in the Premier League.

With that in mind we searched to find a bit more information about the league, and in doing so we realised that we know very little about what the teams actually look like when they are playing, so we set about finding a shop that sells the jerseys, but that seemingly doesn't exist if you can't comprehend Chinese.

Instead, we dug a little deeper and found every jersey in the league uploaded to a Football Manager fan site, and these bad boys are just incredible.

Here's a team-by-team breakdown of all the jerseys, all of which are made by Nike due to an exclusivity sponsorship:

Imagine an Ireland jersey in that green with white and organge on the shouder design.. Nevertheless, those of you looking for some boys in green to cheer on should look no further than Beijing Guoan.

The sponsor ruins it a little bit but the home is still a beaut.

Nothing too spectacular here, but it's could double as a Chinese naitonal team jersey which will no doubt mean it's gone down well with fans over there.

Again there's not too much going on, another clean effort, but the focus must go to that bad-ass logo on this one.

That home jersey is a showstopper. Guangzhou Evergrande are probably the best known team worldwide for their recent adventures in the transfer market, so hopefully this goes on sale somewhere close to home soon because I want it. Bad.

Another cracker of a home jersey here is made even better by that sponsor.

We have no idea what it says, but much like everyone who has a Chinese lettered tattoo, we think it looks really cool.

Come on you boys in Greentown.

Does exactly what it says on the tin this one. 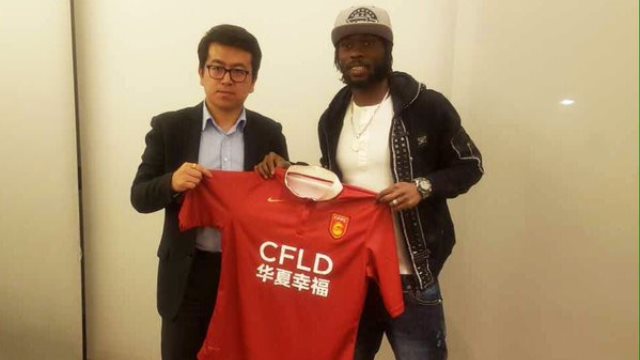 The only images we could find of this jersey involved Gervinho holding it up. Odd.

Still, it's another China themed one, and it's not bad.

That's one of the better Nike teamwear designs, and the two shades of blue makes for a very nice looking home jersey.

The away isn't bad either, fair play Jiangsu.

The AS Roma-style crimson and orange makes it difficult to design a poor jersey.

They just go so well together, and Liaoning is no exception.

Simple yet effective again, which draws attention to an extremely cool logo and sponsor.

The Might Ducks taught me that 'Greenland is full of ice, and Iceland is very nice', so no confusion as to why this jersey isn't green here.

A nice effort for a very oddly named team.

Cracking two-tone red stripes on the home, as plain as it gets on the away.

Another great club badge, they're all just so majestic.

Probably the most basic, and underwhelming, of all on the list.

Are there enough Shanghai teams though?

Harchester United fans eat your heart out for that away jersey!

So there's the full set, which one is your favourite?

Sadly, they seem to be incredibly difficult to purchase, but that just makes them even better for the football hipsters out there, lets be honest. You won't see too many of these down at your weekly 5-a-side.

Big thanks to Wichai over on the FMSite forums for providing the graphics.

SEE ALSO: 10 League Of Ireland Jerseys That Showcase The Beautiful Madness Of The 1990s

SEE ALSO: What Does The Gear You Wear To 5-A-Side Say About You?