A feeling of pride with a hint of outrage might go a long way in describing how how Danish players and fans are feeling this morning, but even that hardly does it justice.

Ultimately, most agree, whether England were due a bit of luck or not, that the referee and VAR made a mistake in awarding England an extra-time penalty that decided the game Euro 2020 Semi-Final last night. It's a hard one to accept for Danish players and their coach, who, while under the cosh, didn't look like conceding at Wembley, and were just 16 minutes from penalties when the contentious decision was made.

“It's a bitter way to leave the tournament,” Danish boss Kasper Hjulmand said. “The way we lost makes it harder to understand why we lost.

“I have to be careful with what I say. We have an amazing group, and we definitely can do something great again. Maybe it is easier for me to say how I feel in a few days.”

Speaking after the game, Denmark and Barcelona forward Martin Braithwaite told Mundo Deportivo: “We have to swallow that. We are proud, but also incredibly disappointed in the way it happened.

“I don't think it was entirely fair, but I have to be careful what I say.”

He added: “Now, I am disappointed, but we [had] many excellent experiences and we are very grateful for the support we have received.

“It has been moving and something we have never experienced.”

One of the heroes of the tournament for Denmark, defender Jannik Vestergaard wasn't as guarded as his teammate.

A penalty kick during extra time must be clear. I saw it live very close and have seen it a few times since, and I don't think there was a shred of a penalty kick.

Danish midfielder Daniel Wass also made it clear how he felt.

It was a huge refereeing error. The disappointment is even greater when it is the referee who decides the match.

Former manager Åge Hareides, him of the Danish team that tormented Ireland for four years, was also very bullish about the refereeing decision that decided the game, saying that Denmark would not have received a penalty in the same situation.

No, it wasn't (a penalty). I don't think England would have been punished in a similar situation at Wembley. It's hard to tell if there's any contact at all. Denmark would not have received it.

Former players were also on hand as pundits. On Danish TV live from Wembley, the mood was anger, with Brian Laudrup calling it "a huge mistake"

Euro 1992 winner and the father of the man of the match last night Peter Schmeichel was  also angry about the referee's decision.

He made a really big mistake on the penalty and this will be debated for a long, long time. It's a hard one to take because it's not a penalty.

I would have been much more relaxed and acceptable if they had scored one of the many chances that they created but unfortunately the referee made a big mistake in my opinion.

"This will debated for a long, long time!"

A tough night for @Pschmeichel1 who is convinced that the referee made a mistake on the penalty. #beINEURO2020 #ENGDEN #EURO2020

“I know in your opinion (points at other pundits in the studio) and everyone's opinion, my phone has not stopped going off, everyone else is saying it's not a penalty so I'm quite sure that I'm [right in saying that].”

As well as players, pundits and coaches, the Danish press were also left dumbfounded by Dutch referee Danny Makkelie’s decision.

Copenhagen tabloid DK claimed, "The Whole World Rages" and led with the UEFA investigation into the laser beamed into Kasper Schmeichel's eyes during Harry Kane's penalty. Ultimately though, they talk of pride in an incredible tournament, and "a nation that has fallen in love with Hojberg, Maehle and co."

While there is coverage for the incident in all of the Danish press, naturally, none of them have lost sight of the incredible achievement of their team over the last month.

If only we could be so philosophical.

SEE ALSO: The Sterling Dive Was Far From The Only Dodgy Aspect Of England's Penalty 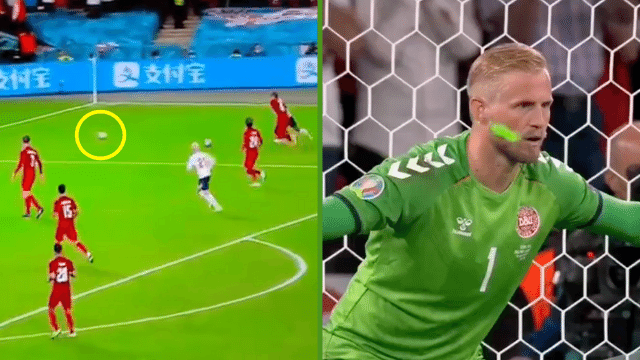 Football
1 week ago
By Eoin Harrington
How To Get ITV In Ireland For The FA Cup Final
Football
2 months ago
By Eoin Harrington
Watch: Christian Eriksen Makes Heroic Return To Football For Brentford
Football
3 months ago
By Jonathan Byrne
'I Won't Change My Style Of Play' Christian Eriksen Relishing Brentford Debut
Popular on Balls
Football
7 hours ago
By Eoin Harrington
Juan Mata Questions Manchester United Management After Dire Season
Golf
2 days ago
By Gary Connaughton
Padraig Harrington Glad He Didn't Have To 'Make A Decision' On Saudi Golf League
Football
1 day ago
By Gary Connaughton
The Frank Lampard Love-In After Everton's Survival Was Downright Bizarre
GAA
2 days ago
By PJ Browne
'It Came At An Awkward Time. I Didn't Think It Would Be So Bad'