Danny Crowley backed Gavin Bazunu to recover from a mistake which allowed Rotherham to take the lead against Portsmouth on Saturday.

With the game level at 1-1 in the second half, Bazunu failed to deal with a shot from well outside the box. In the resulting scramble, Michael Smith backheeled the ball to the net.

"Gavin is a young player, goalies will make mistakes no matter what age they are," said Portsmouth manager Crowley.

"He’s been brilliant for us. He makes a mistake, but it is the response off the back of that that is disappointing for me.

"I just thought we went under. We didn’t show anywhere near the durability and the resilience you need to show in that moment of disappointment. It wasn’t our time to score but a bad time to concede but these things will happen. You have to overcome this."

After taking the lead, Rotherham scored two more goals in quick succession as they won 4-1.

"I just think it is a shot from distance that was really easy for Gavin to claim," Crowley continued.

"He might have just misread it, he might have been looking to catch it and then counter too quickly. I don’t know, I’d have to ask him.

"We obviously, like always, go through it in forensic detail. He then thought he got away with it, it bounced around the box but we didn’t, they scored.

"[Gavin's] been excellent. Good teammates dig their mates out of difficult moments.

"When you make a mistake, you are hoping that they are going to go and respond for him but we weren’t able to find the inspiration to do that.

"He’s a boy who is incredibly focused, very, very professional, got an unbelievable mindset and made a mistake. He’ll get over it.

"He is a tough boy and he’s on a pathway to success, there is absolutely no doubt about that. This won’t be the first mistake he makes and it won’t be the last. That is for sure." 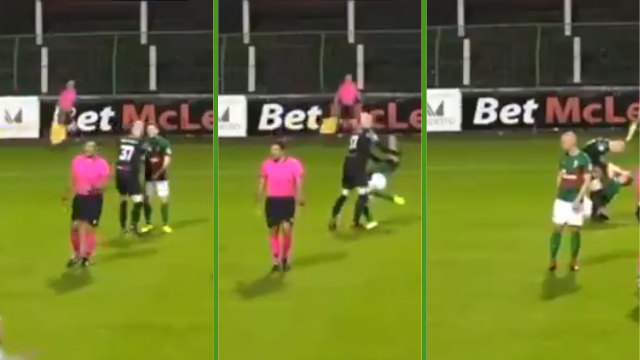 Football
1 hour ago
By Gary Connaughton
The Most Expensive Irish Player At Every Age From 18-35
Football
2 hours ago
By Jonathan Byrne
Report: Lampard Everton Frontrunner After Bizarre Pereira Sky Interview
Football
3 hours ago
By Jonathan Byrne
8 Footballers Who Waited Years To Be Recalled To Their National Team
Popular on Balls
Football
2 days ago
By PJ Browne
Ireland's Lee O'Connor Says It Was An 'Easy Decision' To Leave Celtic
Football
1 day ago
By Eoin Harrington
Quiz: Name Every Player To Score In A Champions League Final
Rugby
1 day ago
By Colman Stanley
Roy Keane Made Quite An Impression On Eddie Jones And The England Rugby Team
52