Having Began His Career With A Broken Back, Darragh Lenihan Now Enjoys Weight Of Responsibility

If Darragh Lenihan played in any other position, odds are he would have a lot more than two caps for his country. The Blackburn player has been in excellent form over the past two years or so, and you could certainly argue that the timing of his rise has been somewhat unfortunate.

Centre back is a position that Ireland are well-stocked in, perhaps more than any other area on the pitch. Shane Duffy has been our most consistent performer in recent campaigns, while John Egan, Ciaran Clark, Kevin Long, and before that, Richard Keogh were all mainstays in the squad.

Not only that, but the past 12 months or so has offered little opportunity to blood new players. Mick McCarthy was not given any friendly games to get a proper look at his options prior to the Euro 2020 qualifying campaign. Lenihan has also been ruled out due to injury on a couple of occasions.

While others may count him unlucky, he doesn't really see it that way. Speaking to Balls, he said his aim is just to control what he can control:

I don’t think so (that he has been unlucky). The position I’m playing in is a very tough one to get into in the Irish team, you have the likes of Duffy, Egan, Clark, Kevin Long, who are all playing in the Premier League.

I just need to play well for my club, put in the performances there and hopefully catch the eye of Mick McCarthy and his coaching staff. That’s all I can control. If I get picked then great, but if not I will just keep working hard and try to force my way into the squad.

Despite only having two caps to his name, Lenihan has already made a small piece of history. Prior to his debut against the USA in June of 2018, a Meath man had never played in a senior international for the Republic of Ireland. The Dunboyne native became the first.

It was something he became aware of in the buildup to the game, but it was very much at the back of his mind when he replaced John O'Shea in what would be the former Manchester United man's last ever international game.

"I think I was made aware of it when I got called up to the Irish team and made the final squad, someone text me telling me I could be the first Meath man to represent Ireland," he recalled.

"Obviously I’m proud of that, but it wasn’t something I was thinking about. I just wanted to do the best I could.

At 25-years old, the defender has slowly established himself as a key player at Blackburn. Despite his relatively young years, it is a club he knows very well. 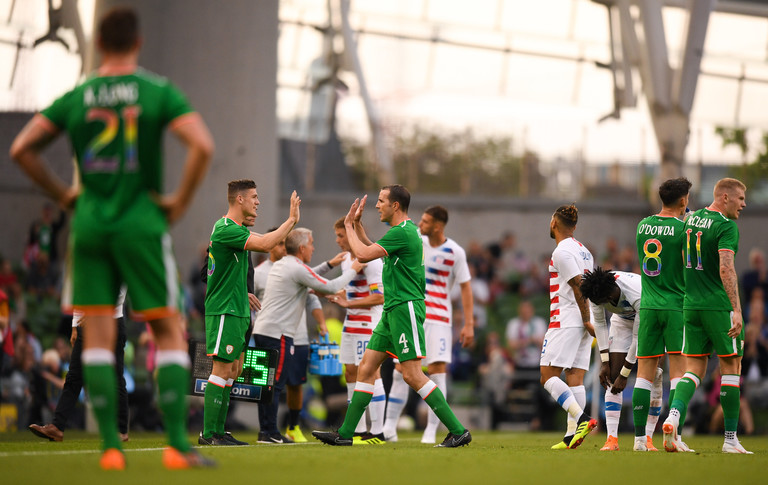 Lenihan became a highly touted recruit during his teenage years at Belvedere, drawing interest from a number of clubs in the UK. Some of that interest resulted in trials, travelling over to spend time with both Derby County and Middlesbrough in the summer between transition year and fifth year.

Neither felt like the right fit. While contract offers would come from both suitors, he took the decision to pass on both. That wasn't an easy thing to do, especially when nobody knew if similar offers would come again later down the line.

Ultimately, his parents told him to be patient.

"My parents said ‘if you’re not happy with it, you should just stay in school for another year and see what happens next year’. That’s what I did," he explained.

"The following Easter I signed a pre-contract with Blackburn and I moved over in June...

"I just liked the setup at Blackburn, I was really impressed. The head scout that brought me over on trial and the education welfare office flew over to Ireland to speak with the principal in my school.

"They were showing a big interest. I found at the time that that went a long way, that they were willing to do that. I thought ‘yeah, they're the one for me’."

It wasn't all plain sailing from here. Far from it, in fact.

After saying goodbye to his schoolmates in June of that year, he would be back a few months later. After being at Blackburn for only five weeks, he would suffer a major injury that would keep him out for ten months.

Unable to train, he would temporarily return to the school he had left only a few months prior. Not that he minded all that much continuing his education. Lenihan would even complete his leaving cert the following year whilst in England, something he would recommend all young players in a similar position attempt to replicate.

It was quite hard actually at the start. Within five weeks of going over I was diagnosed with a double stress fracture in my back, so I was out for the first ten months.

I actually went back into school in Dunboyne for eight weeks.

With that particular injury you’re not able to do anything for the first eight weeks, so Blackburn said I might as well go back into school. So I said goodbye to everyone in June, then I was back in with them in September.

It was a bit weird, but it was just one of them.

I’m thankful that I have the leaving cert behind me. Touch wood I won’t need it, but the option is there!

I don’t know about the percentages of how many people from Ireland make it in the first team environment. I think it’s a big thing now to get your education.

Not only that, but in my time there wasn’t as good of a pathway in the League of Ireland as there is now. There’s the U17 and U19 leagues, more of an academy system to help push into the first team.

He remains very much in touch with those back home, but the rigorous nature of the Championship schedule doesn't allow him to travel back as often as he likes.

He did make it back for Dunboyne's county championship win in 2018, picking out his brother Donal on the pitch after the victory over Summerhill. 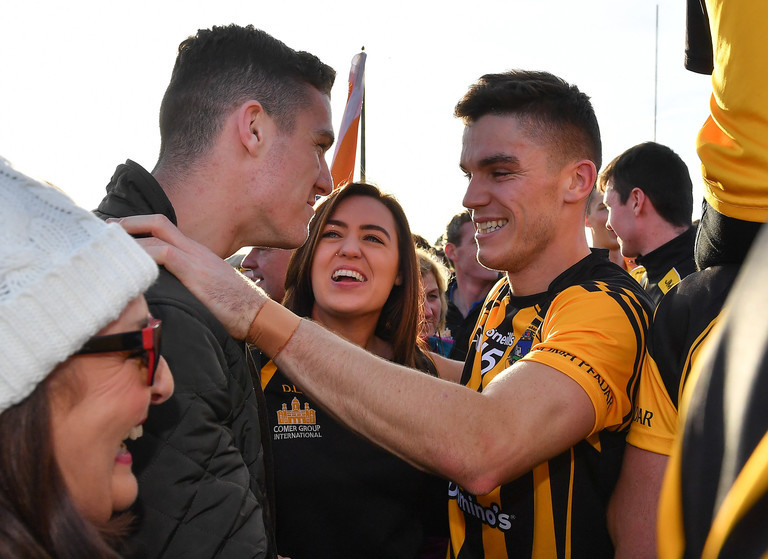 He chuckled at our suggestion that he could return to GAA down the line after his career in England has finished, saying it was something he would love to do if the 'body allowed'. For now, the focus is very much on achieving promotion to the Premier League.

Blackburn find themselves in the thick of the promotion race after a strong run over the past couple of months, with a spot in the play-offs the goal. This period has coincided with perhaps the best form Lenihan has shown up to this point in his career.

He has popped up with a few goals and also sported the captain's armband the team for most of their games. He is a natural leader having also captained the Ireland U21s in the past and he said he thrives on the extra responsibility.

"I think it improves my performance having that extra responsibility. Not only that, but you’re not only thinking of your own, but everyone else’s as well to keep encouraging them and keep positive, especially in bad times.

"I do like that type of responsibility, but we have other senior pros in the club who have been brilliant for me, helping me develop my game. Fingers crossed we can keep it going for the next couple of months."

Despite being very much focused on challenges at club level, no Irish player can help but let the mind wander at what the next few months may hold on the international scene. It has the potential to be a historic period, with the prospect of a major tournament on home soil a unique opportunity. 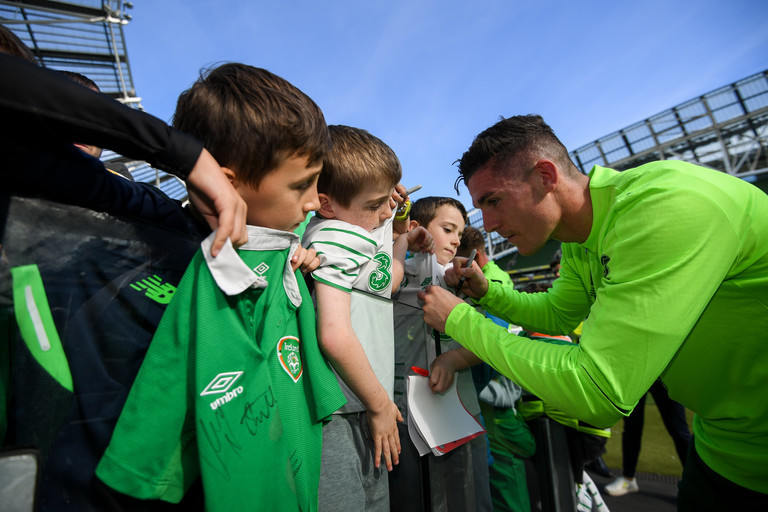 For a player on the fringes of the squad in recent times, this is also a chance to nail down a place in Mick McCarthy's plans.

Lenihan had likely played himself into a place in the squad regardless, but the injury to Ciaran Clark means he has been moved even further up the pecking order. He looks like a near certainty to make the plane to Slovakia, something he admits he hopes comes to fruition.

Even if he does not see any playing time, the defender says that spending time around quality players can only improve him. In the likes of John Egan and Enda Stevens, he can find two examples of how you can go from a squad player to key member of the team in a reasonably short period of time.

As is always the case, he just wants to get better. Anything that comes with that is a bonus.

If you’re playing with good players everyday you’re going to get better, kind of see what they’re doing right and what you can learn from them.

At the moment they’re doing very well at club level, hopefully I can get picked for the next squad...

The Championship is a tough league to get out of, Sheffield United did really well last year with a good Irish contingent in the squad. It’s something we are looking to do now and get to the play-offs and potentially get promoted.

They’ve done ever so well, so hopefully we can do something similar. I just have to do well for Blackburn and if Mick McCarthy is impressed, hopefully he can bring me in.

As for a potential appearance at Euro 2020 in Dublin, Lenihan is unsurprisingly keen on the idea.

"It would be an amazing experience, not just for the players, but for the whole country and all the fans. Fingers crossed we get two positive results next month and can get through."

SEE ALSO: Scouting Slovakia: What Ireland Can Expect In Next Month's Playoff