'If I Was In That Changing Room, I Would Be Annoyed With Players'

David Meyler chose to focus on what he saw as the positives following Ireland's defeat to Finland in the Nations League on Wednesday.

"When Stephen came in, he spoke about playing this possession-based game," the former Ireland international said on Sky Sports after the match.

"I've always come with the attitude that I wouldn't be afraid to say what I'm going to say here to the player [in person]. If I was in that changing room tonight, I would be annoyed with players and the chances [they've missed].

"Ronan Curtis, you've got to score. Aaron Connolly has the ball, he's got to pull it back for Daryl Horgan. Those small details which will take us on a level or two.

"If we get the decision making in the final third right, we will score goals. The chances are there, we are creating. It's just about who's going to be the man to step up, take that responsibility and put the ball in the net."

Fredrick Jensen was once again the thorn in Stephen Kenny's side. Just as he did in Dublin last month, he grabbed the only goal in a 1-0 victory.

"I think that game was there for the taking.

"There were positive signs. Again, we're beating the same drum, it's about goals. We have to find a way. We had some great chances and we have to start taking them.

"It was a good performance. There are things you would like to change.

"There were a lot of young faces in there, a couple of international debuts. 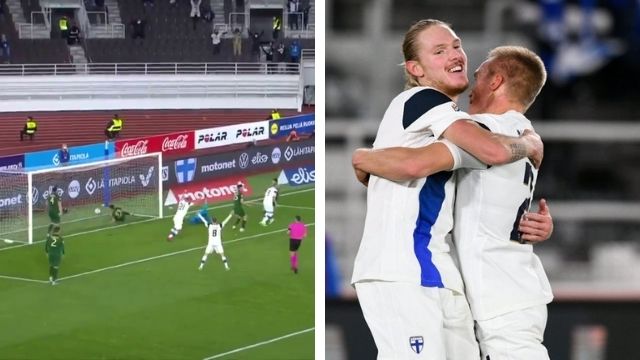 Football
4 months ago
By Balls Team
Here's The Last Irish Football International From Every County In The Country
Football
2 years ago
By Maurice Brosnan
Former Ireland Midfielder David Meyler Takes First Steps Into Coaching
Football
2 years ago
By Mark Farrelly
'Cally Kept Saying She Was OK - She Knew What It Meant To Me To Play For My Country'
Popular on Balls
Football
3 hours ago
By Eoin Harrington
Juan Mata Questions Manchester United Management After Dire Season
Golf
2 days ago
By Gary Connaughton
Padraig Harrington Glad He Didn't Have To 'Make A Decision' On Saudi Golf League
Football
1 day ago
By Gary Connaughton
The Frank Lampard Love-In After Everton's Survival Was Downright Bizarre
GAA
2 days ago
By PJ Browne
'It Came At An Awkward Time. I Didn't Think It Would Be So Bad'