The Cork native played the full 90 minutes as her side defeated the Portland Thorns to seal the title. Goals from from Jessica McDonald and Debinha were enough to hand the team a 3-0 win, gifting the club their first ever NWSL championship.

O'Sullivan was voted the team's MVP by her fellow players at the end of the regular season, and she has now added an American crown to the league titles she has already won in Ireland and Scotland.

Having moved stateside with Houston Dash, the switch to North Carolina has been a resounding success for the player. She had this to say on Twitter: 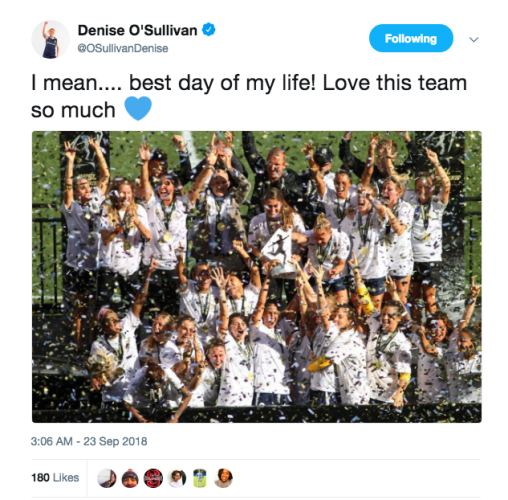 It has been a hugely successful season for the Courage, having already claimed the Women’s International Champions Cup and the NWSL Shield earlier in the year.

O'Sullivan has played a huge part, anchoring the team in a holding midfield position. At 24-years old, she has the potential to carry out the same role in the Republic of Ireland team for the next decade.

She has already made over 50 international appearances, and will be hoping to lead the Irish team to a place in the 2021 European Championships.

For now, she can enjoy her achievements in what is perhaps the most competitive women's league in world football.