Having hauled themselves out to earn a glimpse at the light, Southampton then let go of the rope and plunged back into the mire this afternoon. They led Chelsea 2-0 after an hour of their Premier League tie this afternoon, only to collapse in the space of eight minutes and slump to a 3-2 defeat.

The first Chelsea goal was scored by Olivier Giroud but assisted by Marcos Alonso, who shouldn't have been on the field to do so. In the first-half, Alonso inexplicably stamped on the back of Shane Long's knee, with the onlooking Mike Dean doing....nothing. 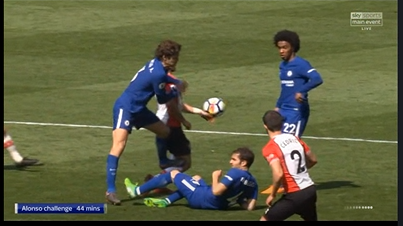 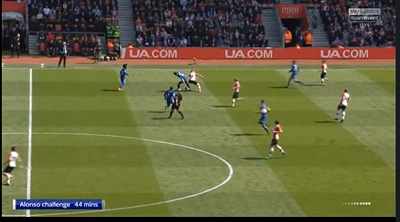 At half-time, Denis Wise was extremely critical of Dean.

It's a joke by Mike Dean. He knows what's gone on, and he's turned a blind eye to it. He'll turn around now and say he hasn't seen it. If he didn't see that, he shouldn't be refereeing and he needs glasses. Simple as that. It's a red card.

At full time, Sky did their usual shtick of turning to former Premier League referee Dermot Gallagher, once again sequestered in his underground bunker. (He may have been there since the start of the season).

While admitting that it was a red card, Gallagher refused to be overly-critical of Dean.

Meanwhile, in the background, Wise and Matt Le Tissier struggled to compress their bewilderment.

Gallagher - I do think it was a red card offence.

Kelly Cates - Why did Mike Dean not give it?

Gallagher - I think he is probably too close. I think he has got the wrong angle.

Gallagher - The FA will ask him if he's seen it, he clearly hasn't or otherwise, he would have given a foul.

Galllagher - It's something he hasn't seen.

A clip can be seen on reddit/soccer.