Dick Advocaat On Notorious Photo Of Himself, Louis Van Gaal And Nude Models

Old sparring partners Louis Van Gaal and Dick Advocaat meet on the touchline this afternoon. It is anticipated that there will be a dearth of painted nude models at Old Trafford today but who knows? Maybe some enterprising stripper will take the opportunity to advertise a local body painting service. What better day to do it?

Needless to say, Dick Advocaat was asked about the famous photo, which has become an internet legend, of both himself and Louis Van Gaal, then managers at PSV Eindhoven and Ajax respectively, posing with a pair of models whose bodies were painted in the team's strips.

Much of the commentary on the photo has centred on Van Gaal's left hand, which dangles perilously close to the Ajax painted model's rear end. While Advocaat's face is determinedly businesslike, Van Gaal patently looks happy to be there. 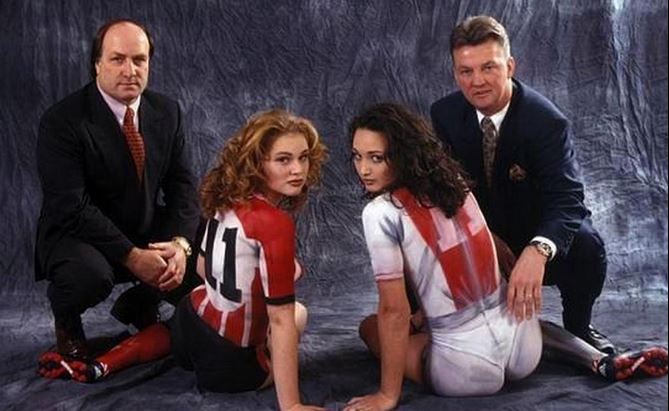 Advocaat insists the nature of the photoshoot was as surprising to the two managers as it was to anyone else.

It was PSV v Ajax I believe. We were quite surprised when we came in. I can remember it. They were already painted unfortunately.

Photoshoots have moved on since the days of the mid-1990s...