'I Didn't Know Whether I Was Going To Be Arrested': Fan Tells Of Heavy-Handed FAI Treatment In Serbia

Emmet Malone of the Irish Times reported on Tuesday regarding at least two Irish fans being stopped and searched by an FAI representative while entering the Red Star Stadium in Belgrade on Monday evening for Ireland's World Cup qualifier against Serbia.

The objective was to prevent the display of a banner voicing disapproval of FAI chief executive John Delaney. The banner featured Delaney looking down on eight Irish players - all members of Ireland's Euro 2016 squad - who were wearing the League of Ireland jerseys of their former clubs. The banner was captioned with Delaney's infamous 'problem child' line about the League of Ireland along with '#DelaneyOut'.

Last week Zeno Kelly, one of the fans searched, sent a picture of the flag taken at Three Carrots Irish bar in Belgrade to Balls.ie. 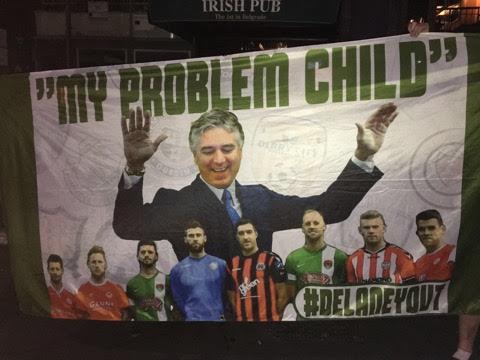 Now two days removed from Ireland's draw in Belgrade, he spoke to Balls' own Gavin Cooney about his troubles in gaining entry to the fixture, and the heavy-handed treatment he received from an FAI official:

I arrived up to the entrance designated for away fans and patted down by the stewards and my ticket stub taken as per usual. Then Joe [FAI Head Of Security Joe McGlue - as reported by the Irish Times] was standing a few feet behind, came over and told the steward to not allow me in and give me back my stub and told me to stand to one side as he wanted to talk to me and had informed both the stewards and police not to permit me entry.

I asked one of the riot police for clarification, to the response that one of your guys in charge is saying to not allow you in, pointing in Joe's direction. For approximately 15 minutes he left me there without saying a word - genuinely not knowing whether I was going to be allowed access or Joe have the riot police take me away. A few lads went up remonstrating to him for me in intervening period.

When he did come over he said "I was always going to allow you in after paying all the money to come here" before questioning me about where the flag was. I hadn't brought it as I was well aware he may try that trick. He finally let me in when he discovered this.

Whatever about trying to intimidate me, to do it so publically in a country where there is no tolerance for trouble with matchday cops is a ridiculous abuse of power at a match the FAI have no jurisdiction. Not to mention being sidelined like a criminal makes me look like I was causing trouble to other Irish arriving which couldnt be further from tbe truth.

My main concern now is that he'll turn me away in Moldova or Vienna as he has shown he has the power to do so at away games, which to me is completely inexcusable so I am likely to go to my TDs when I get back.

On Wednesday afternoon, Kelly also spoke on Radio One's Liveline with Joe Duffy to talk about what happened in Serbia:

I approached where there Irish fans enter, separate from the home fans. I went up, the first steward was there to pat you down. He patted me down, patted my friends down and let us on through. The second ticket inspector is where they take the ticket stub.

When the girl took the ticket stub, an FAI representative stepped in behind her and said 'Can you please give that stub back, he's not getting in. He needs to stand to the side, I need to talk to him.'

I was recognised. That FAI representative would know me from down the years going to matches. Rarely would he be at the turnstiles where the Irish fans are going in. He is often on the pitch. He'd be seen but not on the turnstile behind the ticket inspector. It was fairly strange but I'd seen him before.

I was stood behind the ticket inspectors and a riot policeman was there too. The FAI representative had retreated inside so I was standing there not knowing what was going to happen. I didn't know whether I was going to be arrested - obviously that was the worst case scenario but I didn't know what he was doing or what the issue was.

The search was a futile one. As he indicated to us earlier, knowing that a check for the banner was a possibility, Kelly decided against bringing it to the game.

It's a light-hearted banner. There's no aggression in it. I was left there for 15 minutes and the riot police told me 'your man has said we can't let you in. You have to stand there until he comes back'. He came back 10 or 15 minutes later and he said 'Zeno, I was always going to let you in because you've paid all your money to get here but where is the flag? Do you have any flares on you?'

I decided not to bring the flag to the match because I had a feeling that once the FAI knew I was over there, they might aim to take it off me.

Monday was not the first disagreement between Kelly and the FAI. Last year, he had his season ticket revoked. Kelly believes this was because he was one of a group of fans who formed a 'Delaney Out' message during Ireland's Euro 2016 qualifier against Gibraltar in Portugal last year.

That was because in Faro last year, there were about 10 of us who had 'Delaney Out' in white t-shirts, one letter per t-shirt. I was one of them and because I was recognised by this FAI representative maybe I was singled out. I feel I was singled out.

The FAI claimed that the revocation of his season ticket was because Kelly had been 'promoting the use of flares'. This was something which Kelly argued against.

The FAI said they had been monitoring social media and I said 'What did I put on social media? They said 'You were promoting the use of flares and as flares are illegal at home matches this is the reason'.

Kelly did post online mentioning flares but denies promoting their use.

That was in June or May, I can't remember [when he posted one line mentioning flares]. It was four games later [when his season ticket was revoked] - after the England match, Scotland match, the match in Faro and the match at home to Georgia. The match in Faro was only four days before that, so read between the lines there.

You can listen to the discussion on LiveLine here.