How To Dive Like Diego Costa: A Frame By Frame Analysis Of The Art Of Bastardry

A player who clearly has excellent ability, especially in terms of positioning and finishing, yet rather than lying in bed the night before a game and visualizing how his goals will come the next day like many top strikers claim to do, you get the impression that he thinks about how he's going to act like a dick to the opponents he faces.

And he's the best being a bastard. His goal is to help his team win and make every single fan of the opposition despise him, even if he makes some of his own fans turn on him in the process.

On Sunday against Arsenal, a fast-paced and open game was completely changed by a dive, as Per Mertesacker was sent off for suggesting a tackle be made on the Spanish international. Here's how it happened, as it happened. 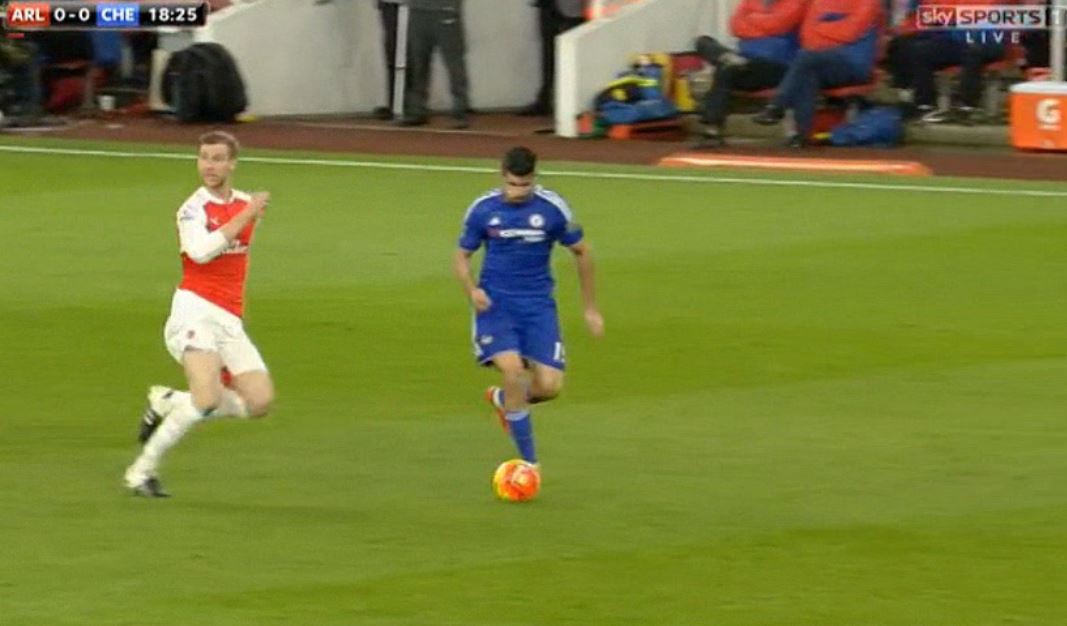 Mertesacker's amusing look to the linesman in desperation gives Costa the signal. A last-ditch tackle is incoming, it doesn't matter how successful it is or how much contact there is, he's hitting the deck.

At this point Costa is probably thinking of the worst pain he has ever suffered in his life in order to capture the same facial expression and seal the deal. 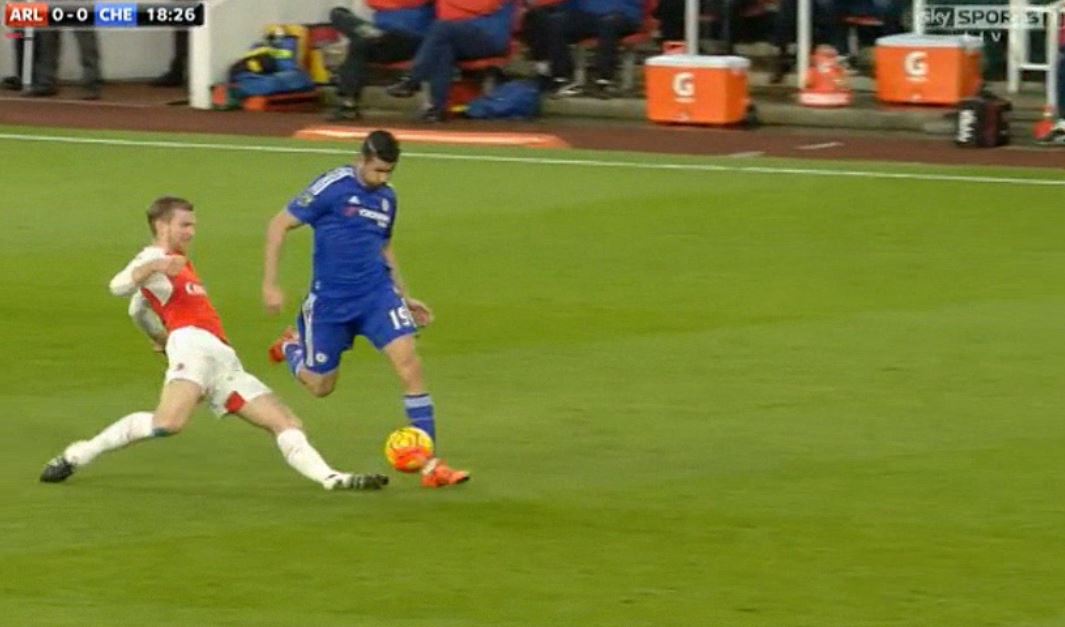 When Per lunges, Costa knows that now is the time to push off and it's time to start the descent.

Stage 3 - The Point Of No Return 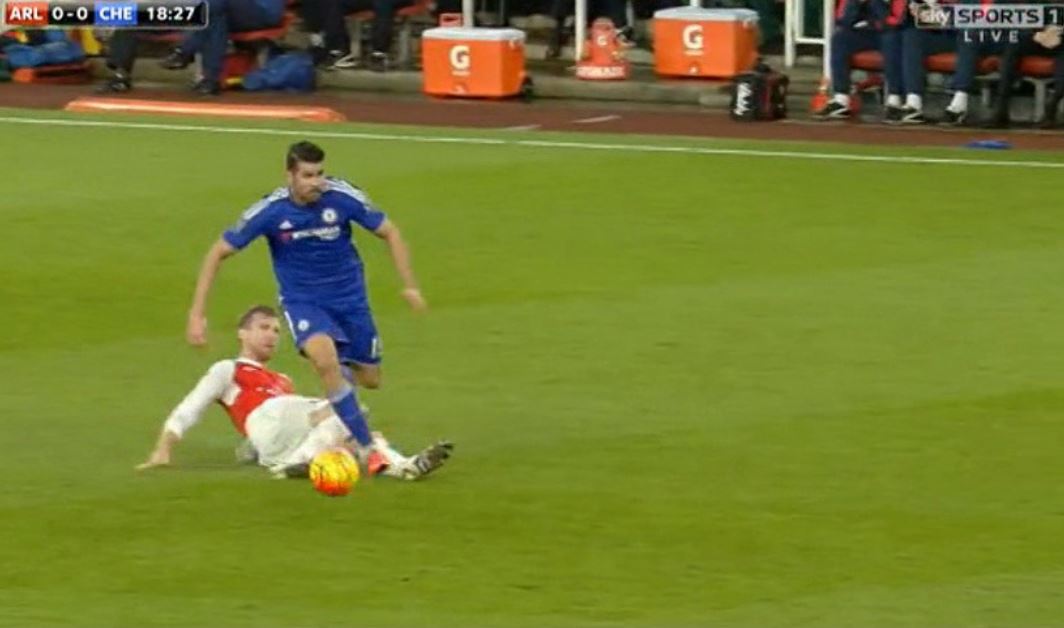 The challenge has been made, and no contact has been initiated. Now is where the inner bastard must truly make his money. 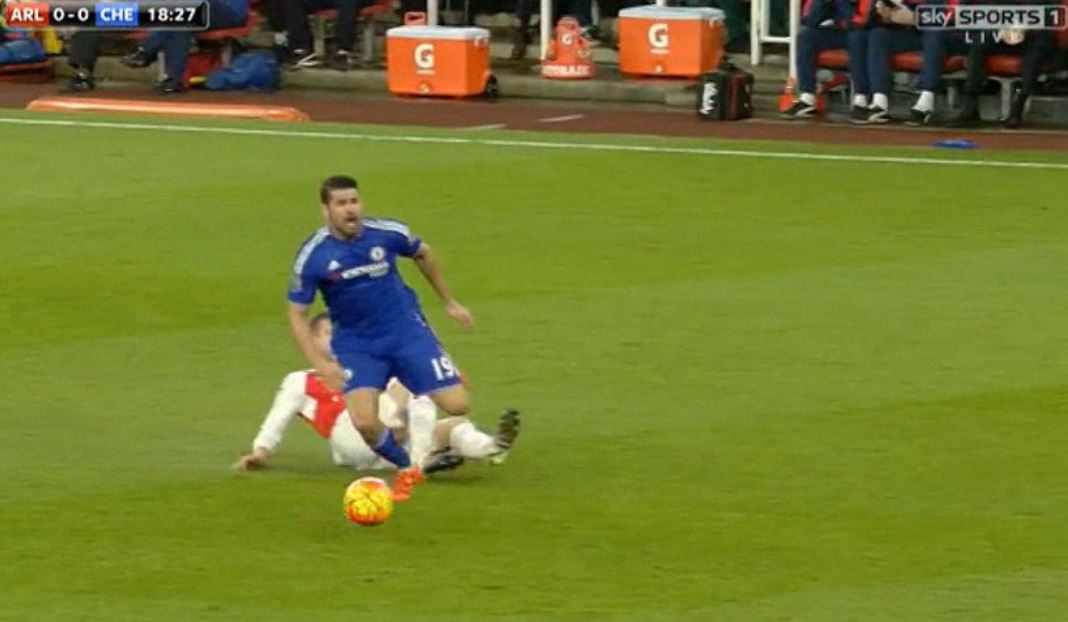 It starts with a shout. "AAAHHHHH!". The force of the (totaly lack of) impact is has caused an immediate reaction, and it's so sore! This face will remain throughout the manoeuver and likely continue until the other player has left the pitch.

Look at the form, it's perfect. He looks like he's about to watch a small child run out into a busy street. 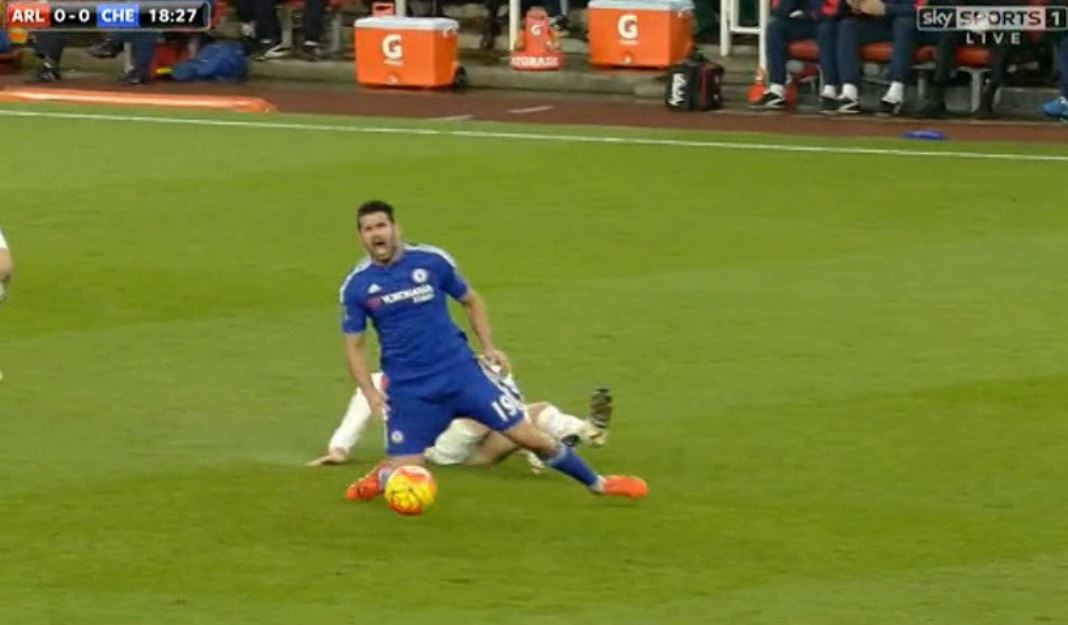 The key to any successful dive. If it's not going to plan and you didn't get the contact you wanted you've got to pull your best Jean-Claude Van Damme and begin your B-Boy break-dance sequence.

Stage 6 - The Second Launch A.K.A. The Showstopper 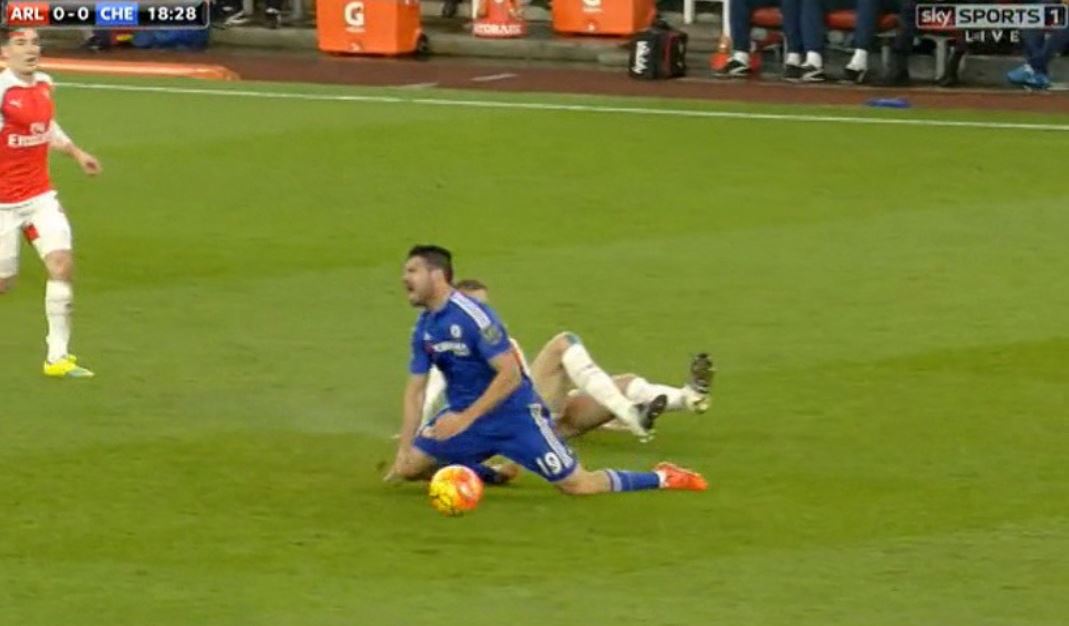 This is where the elite cheaters of the modern game ensure optimum punishment is dished out.

The second launch is where you jump into a double-axel to score more points with the judges and reinforce the idea that your season may be about to end due to injury.

It's purely for show for the man with the whistle, but much like takedowns with UFC judges, they fucking love it. 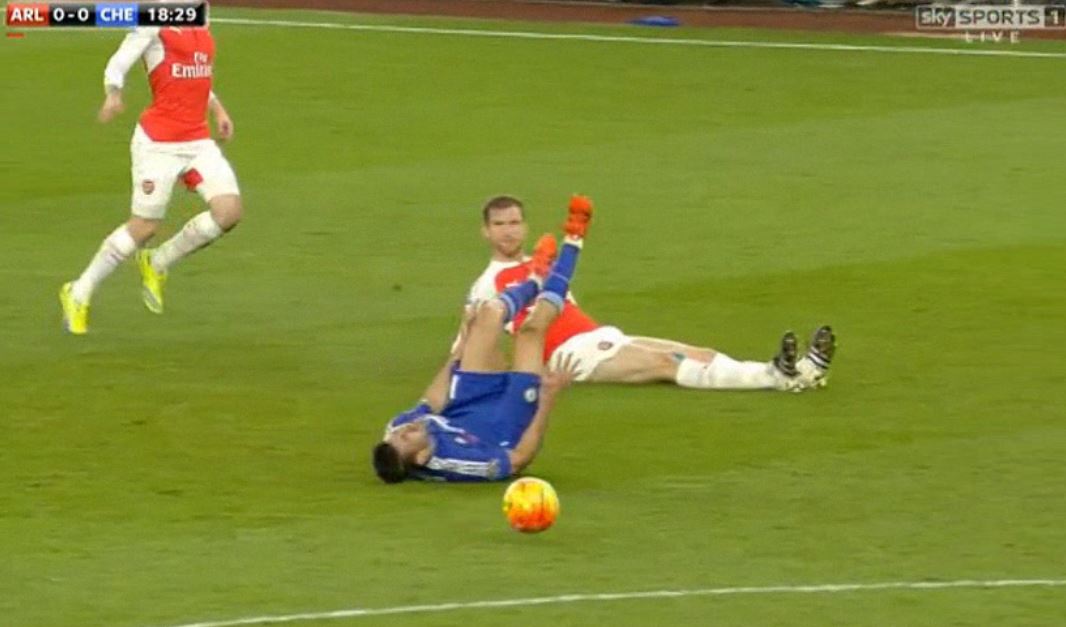 Diving can be dangerous, you must be careful out there.

'The tuck' is where a player mindfully enters the plank position to ensure at least another roll for effect, and to make sure no limbs get hurt in the theatrics.

Stage 8 - Decision Time: Where Am I Injured? 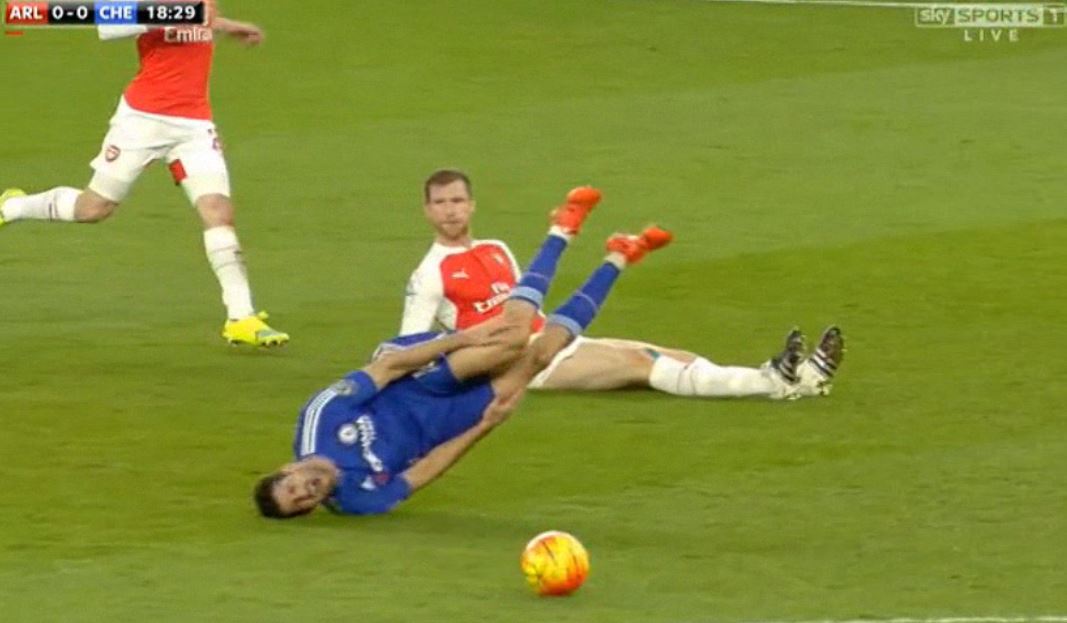 This is the most difficult aspect of the dive, as the diver must chose which area he is pretending to have injured.

This is actually some sloppy work from Diego, as he is caught in two minds as to which knee is more believable, but like the consummate pro he is, he makes the correct call in time.

This is also when you must decide on your final "finishing face". 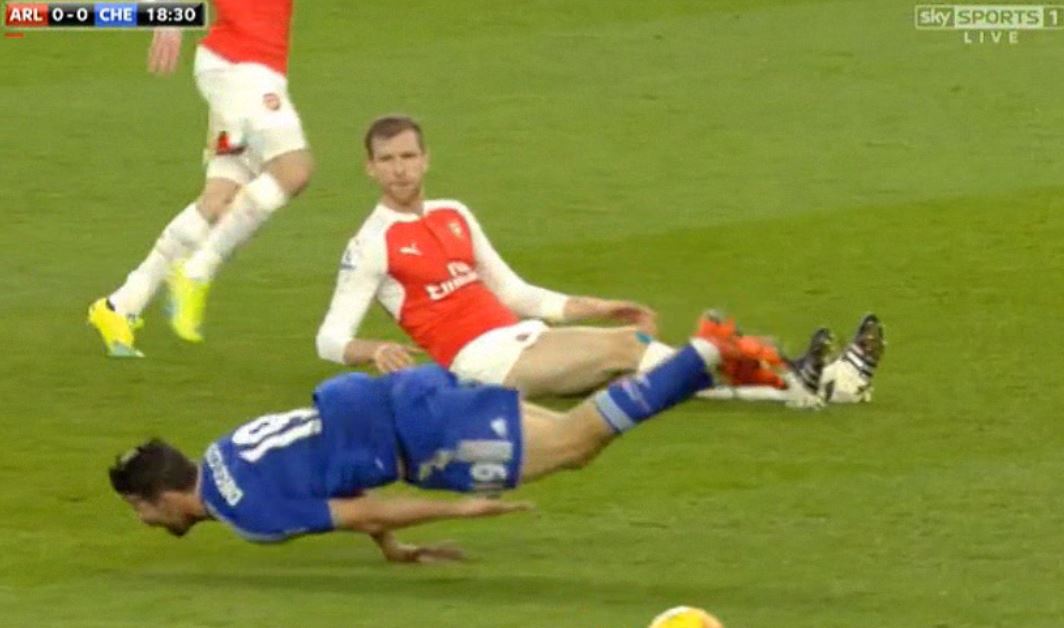 One last chance to score points before the big finish, and Costa expertly exits the plank to get one last push and finish where he had envisaged this dive in his dreams.

It's the little nuances that set the best divers apart. 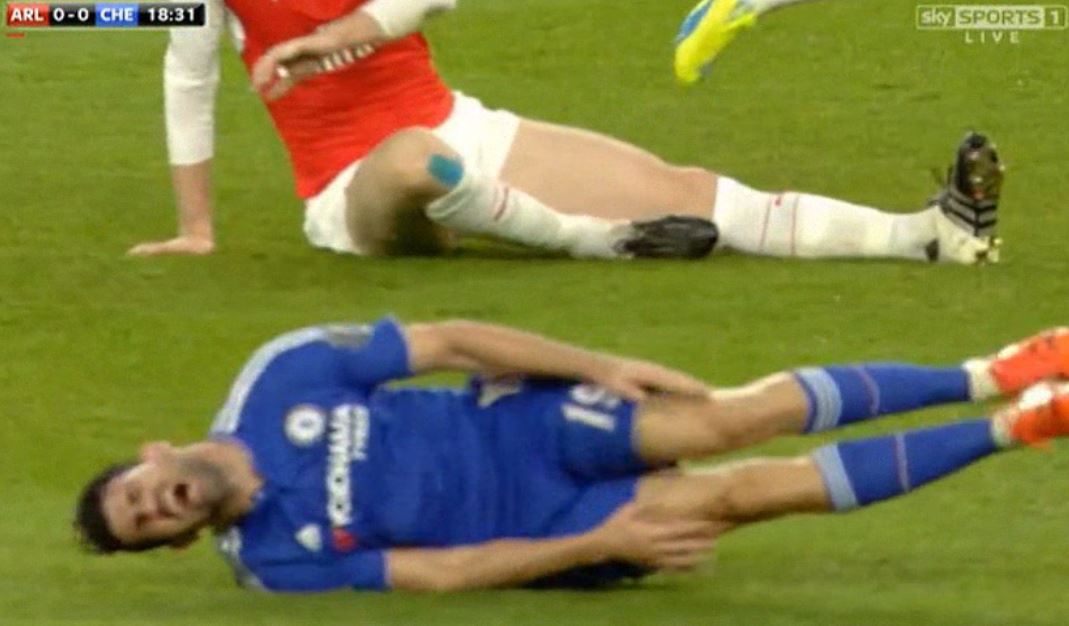 Body position is immaculate, giving the idea that Costa may never walk again, but this one is all about that finishing face, like a man who has returned to his home village to see it ravaged by war.

Now all that is left to do is wait for magical healing powers of a red card being shown. 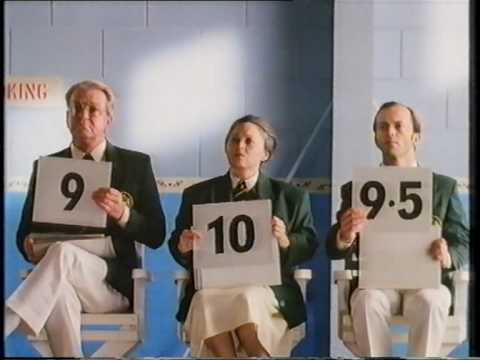 SEE ALSO: The Curious Case Of Dimitri Payet: How Did All The 'Big' Clubs Miss Out On His Talents?