England are through to the Euro 2020 final, but it's tough to pay them their dues considering the manner they have gotten there.

Gareth Southgate's created the better chances over the 120 minutes and porbably should have won the game. However, the manner in which they were handed the victory by the officials does not sit right.

Sterling clearly dived for the penalty. Not only was this missed by the referee, the VAR officials also turned a blind eye to the theatrics.

That's bad enough, but there are a couple of other elements to the incident that mean this looks even worse than first though.

Replays indicate that there was a second ball on the pitch. In fact, it was incredibly close to the sequence of play that resulted in the 'foul'.

Normally the referee would immediately stop the play on such occasions. For some reason, there was a blind eye turned on this occasion.

You can clearly see the second ball on the pitch in the image below.

two balls on the pitch but play was never stopped …. i actually can’t believe their luck uno pic.twitter.com/VFOaTMtJH1

This passage of play clearly should have been halted.

To add to that, Kasper Schmeichel's vision may well have been a bit impaired during the penalty itself.

Replays of the spot-kick show a laser clearly being pointed towards the player's eye as Kane was about to take his penalty.

The Dane did remarkably well to save the shot in those circumstances.

Absolutely shocking that this was allowed to happen! Someone used a laser pen on Kasper Schmeichel!!! pic.twitter.com/73goP3J00a

Someone in the crowd was pointing a laser into Schmeichel's eyes as he was trying to save the penalty Sterling dived for.

Horrible look for England this.

Talk about a perfect storm in order to reach the final.

You'd imagine Italy might have gained quite a few more fans as a result of tonight's game. 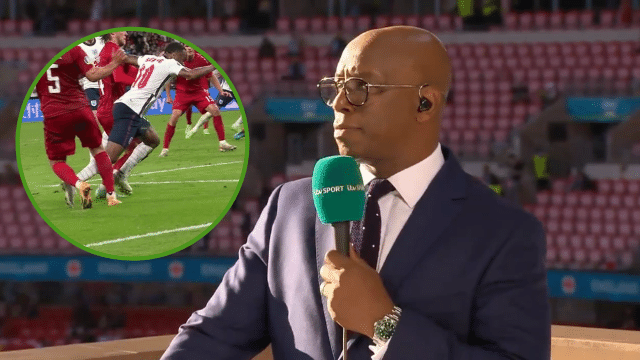